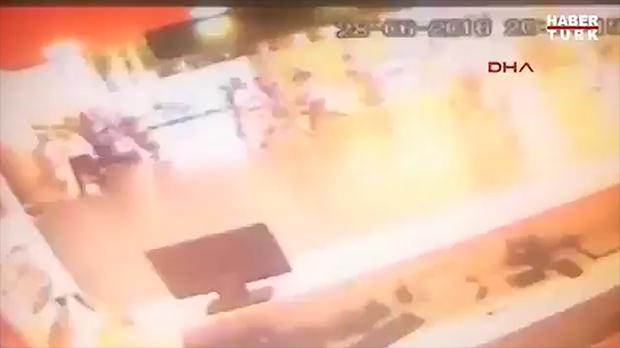 “We were in a pool of blood,” an eyewitness said.

Close to 150 people were also wounded in the attacks, officials said.

“Police fired shots at suspects at the international terminal’s entry, before security check, in an effort to neutralize them,” the official said.

Video on social media appeared to show surveillance footage of one explosion:

Graphic images showed bloodied victims lying on the ground outside the terminal, where yellow taxis normally line up to shuttle travelers into the city.

“I was taking my mother to her plane when the attack occurred,” an eyewitness told Turkish media outlet Haberturk. “I got to the parking garage quickly, and everyone was running in all directions.”

The eyewitness described the explosions as “very violent,” saying, “We were in a pool of blood.”

“Everything happened very fast,” Ahmad Alomary told HuffPost Arabi. “I was waiting for a friend of mine [who was] coming from Dubai inside the [airport] arrival hall, then all of a sudden we heard a loud explosion noise and the security guards asked everybody to lie on the ground. The hall was crowded with many people, some with children. We all laid down, then I managed to run out from the hall.”

Most of the victims appear to have been Turkish, a source told HuffPost Arabi. Many of the injured were brought to the nearby government-run Bakırköy hospital, where an enormous crowd of worried family and friends gathered outside.

Ataturk, Turkey’s largest airport, is the main international airport serving Istanbul. All flights were temporarily suspended at the airport in the wake of the attack, including those inbound from the U.S., and Facebook activated its Safety Check feature for the surrounding area. Flights to and from the airport have since resumed and American airports have increased security in response to the attacks,ABC News reported.

Dazed travelers in the airport’s domestic terminal made phone calls to loved ones and waited for information, according to one woman who was present.

At least some people inside the airport were told that they wouldn’t be able to leave for hours as authorities searched the building, another person who was waiting to be evacuated told The WorldPost.

Turkey has been reeling from months of attacks targeting both tourists and security forces. Self-described Islamic State militants have claimed credit for some of the bombings, while Kurdish militant groups, which the Turkish government is fighting in the country’s south, took responsibility for others.

“Terrorism strikes with no regard for faith and values,” President Recep Tayyip Erdogan said in a statement. “Nor do terrorists distinguish between their victims. We urge the world, especially Western countries, to take a firm stand against terrorism.”

“Make no mistake: For terrorist organizations, there is no difference between Istanbul and London, Ankara and Berlin, Izmir and Chicago or Antalya and Rome,” he continued. “Unless all government and the entire mankind join forces in the fight against terrorism, much worse things than what we fear to imagine today will come true. The Ataturk Airport attack should serves as a turning point in the fight against terrorism around the world and especially in Western countries.”

Turkey began throttling access to news coverage just hours after the attack, a practice that has become common in recent months, watchdog groups said. The prime minister’s office issued the gag order to all media outlets, which banned the sharing of any visuals from the incident, according to Vocative. Both Facebook and Twitter experienced disruptions as well.

White House press secretary Josh Earnest responded to the attacks in a statement, saying, “Ataturk International Airport, like Brussels Airport which was attacked earlier this year, is a symbol of international connections and the ties that bind us together.”

“We remain steadfast in our support for Turkey, our NATO Ally and partner, along with all of our friends and allies around the world, as we continue to confront the threat of terrorism,” he added.