Britain Rattles Postwar Order and Its Place as Pillar of Stability TMR Editor’s Note:
The NYT piece posted below is remarkable for the depth and breadth of its transparent propaganda.  However, there is also a lot of information which is very telling about how the NWO ruling cabal might view BREXIT.

Whether this article provides those insights or not, it ought to offer an opportunity for a really great laugh.

Britain Rattles Postwar Order and Its Place as Pillar of Stability

LONDON — Britain’s historic vote to leave the European Union is already threatening to unravel a democratic bloc of nations that has coexisted peacefully together for decades. But it is also generating uncertainty about an even bigger issue: Is the post-1945 order imposed on the world by the United States and its allies unraveling, too?

Britain’s choice to retreat into what some critics of the vote suggest is a “Little England” status is just one among many loosely linked developments suggesting the potential for a reordering of power, economic relationships, borders and ideologies around the globe.

Slow economic growth has undercut confidence in traditional liberal economics, especially in the face of the dislocations caused by trade and surging immigration. Populism has sprouted throughout the West. Borders in the Middle East are being erased amid a rise in sectarianism.China is growing more assertive and Russia more adventurous. Refugees from poor and war-torn places are crossing land and sea in record numbers to get to the better lives shown to them by modern communications.

Accompanied by an upending of politics and middle-class assumptions in both the developed and the developing worlds, these forces are combining as never before to challenge the Western institutions and alliances that were established after World War II and that have largely held global sway ever since.

Britain has been a pillar in that order, as well as a beneficiary. It has an important (some would argue outsize) place in the United Nations, and a role in NATO, the International Monetary Fund and the World Bank — the postwar institutions invested with promoting global peace, security and economic prosperity.

Now Britain symbolizes the cracks in that postwar foundation. Its leaving the European Union weakens a bloc that is the world’s biggest single market, as well as an anchor of global democracy. It also undermines the postwar consensus that alliances among nations are essential in maintaining stability and in diluting the nationalism that once plunged Europe into bloody conflict — even as nationalism is surging again. 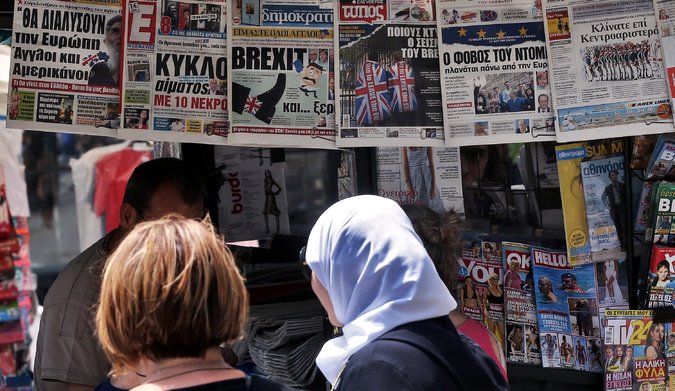 “It’s not that this, in and of itself, will completely destroy the international order,” said Ivo H. Daalder, a former American representative to NATO who is now president of the Chicago Council on Global Affairs. “But it sets a precedent. It is potentially corrosive.”

The symbolism was pointed in China on Saturday morning, two days after the British vote. In the packed ballroom of a Beijing hotel, China’s new international development bank held its first meeting of the 57 countries that have signed up as members. The new institution, the Asian Infrastructure Investment Bank, is designed to give China a chance to win influence away from the World Bank and the International Monetary Fund.

“History has never set any precedent,” the new bank’s president, Jin Liqun, once wrote of the United States and its Western allies, “that an empire is capable of governing the world forever.”

Even as European leaders held a flurry of meetings on Saturday to weigh a response to Britain’s departure, President Xi Jinping of China welcomed President Vladimir V. Putin of Russia to Beijing for a brief state visit. More than China, Russia is an outlier to the American-led international system, and Mr. Putin — at best a wary partner of China, which itself has severe economic challenges — in recent years has worked to divide and destabilize Europe.

Mr. Putin has troubles of his own, including an economy hurt by low oil prices, that could limit his ability to exploit the moment. Still, for him, analysts say, the British vote is an unexpected gift.

Russia has nurtured discord inside the European Union by supporting an array of small, extremist political parties that foment nationalist anger in different countries. Russia’s seizure of Crimea in 2014 and meddling in eastern Ukraine directly challenged the rules-based international system of respecting national borders and led to a continuing political confrontation with the United States and Europe. 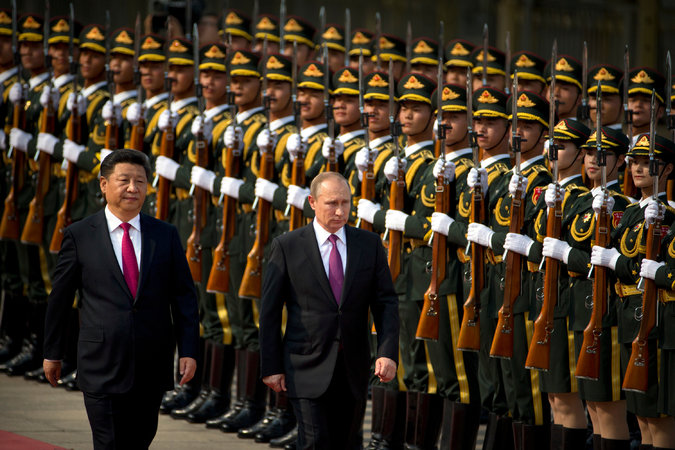 “Vladimir Putin will be rubbing his hands in glee,” the British historian Timothy Garton Ash wrote in The Guardian. “The unhappy English have delivered a body blow to the West, and to the ideals of international cooperation, liberal order and open societies to which England has in the past contributed so much.”

The end of Pax Americana is not a new theme. Predictions of American decline were rampant after the global economic crisis in 2007 and 2008, amid parallel predictions of the dawning of a new Chinese century.

But the American economy steadily recovered, if imperfectly, while China has unnerved many of its Asian neighbors with a newly aggressive foreign policy. Chinese overreach opened a path for renewed American engagement in Asia, the fastest-growing region in the world, as President Obama called for a “pivot” to Asia.

Analysts disagree on whether this pivot signaled a declining American interest in European affairs and contributed to the Continent’s current problems. Part of the Obama administration’s rationale was to extricate the United States from decades of costly involvement in the Middle East at a time when that region was in upheaval.

There, the breakdown of the postwar political order has been more fundamental and violent than in Europe. The uprisings of the Arab Spring erupted from widespread frustrations with stagnant, autocratic politics and economic lethargy. But these rebellions failed to yield stable governments, and the borders drawn by Europeans a century ago in Syria, Lebanon and Iraq have been rendered largely irrelevant.

The nationalism surging in Europe is not the problem in the Arab world; rather, populations have retreated into greater reliance on sects, ethnic groups and militias. Jihadist groups like Al Qaeda and the Islamic State have fought national armies and won, providing a religious alternative to the nation-state that has been embraced by some. 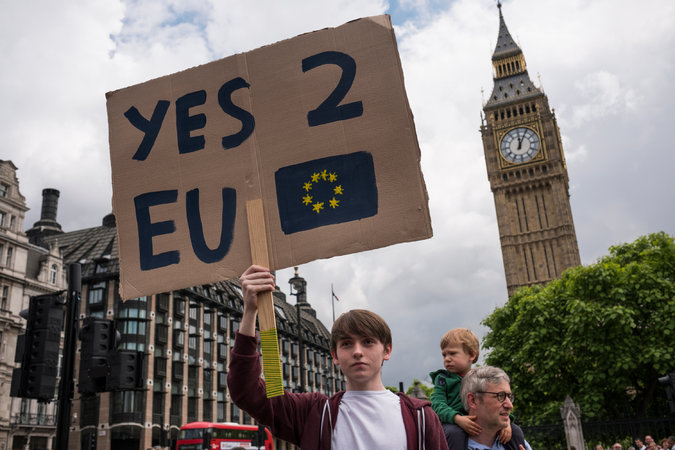 Protesters who were in favor of Britain’s remaining in the European Union in Parliament Square in London on Saturday. CreditAdam Ferguson for The New York Times

Bassel Salloukh, an associate professor of political science at the Lebanese American University in Beirut, said the problems in the Middle East and Europe shared a common origin in the anxieties caused by tectonic shifts in the global economy. But while fear and frustration in the West have shown themselves through democratic elections, brittle Arab states lacked the flexibility to respond.

And those explosions were not contained within the Middle East. Refugees have poured out of Syria and Iraq. Turkey, Jordan and Lebanon have absorbed several million refugees. But it is the flow of people into the European Union that has had the greatest geopolitical impact, and helped to precipitate the British vote. Stabilizing Syria and permanently curbing the refugee flow could be one of the critical factors in determining whether Europe can steady itself politically.

Before the refugee crisis, the European Union was already an unwieldy and unfinished entity. Its contradictions and imperfections were exacerbated by the economic crisis. Yet it was the onset of more than a million refugees marching through Greece and the Balkans toward Germany that may ultimately prove to be the most destabilizing event in Europe’s recent history.

European countries erected border fences despite the bloc’s system of open internal borders. Populist parties raged against immigrants. Britain was relatively insulated, yet British politicians campaigning to leave the European Union depicted an island under siege, mixing the very different issue of immigration from other European Union states with the perceived threat from an influx of poor Muslims. This anti-immigrant strain twinned with the economic anxieties of many Britons who felt left out of the global economy to drive support for the country going its own way.

In the wake of Britain’s choice, Europe faces the parallel challenges of holding itself together and of retaining its global influence. 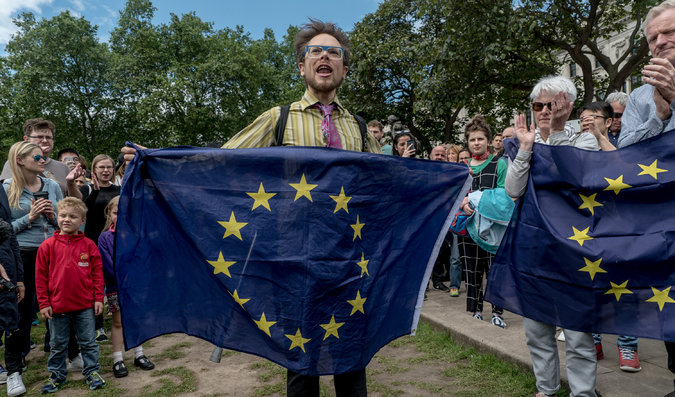 Pro-European Union protesters held the bloc’s flag at a demonstration in London on Saturday.CreditAndrew Testa for The New York Times

NATO has rediscovered its purpose in the aftermath of Russia’s intervention in Ukraine. Yet the Baltic countries still worry whether the military alliance would truly defend them against Russian aggression, and the alliance has had trouble defining its role in fighting terrorism or dealing with the migrant flow.

Britain is a valued member of NATO, but if it is weakened economically by its decision to leave the European Union, its leaders might come under public pressure to pare back military spending — even as the United States is pressuring NATO members to spend more on defense. Meanwhile, Donald J. Trump, the presumptive Republican presidential nominee, has mused about whether NATO is as necessary as it once was.

“Britain leaving the E.U. now poses a challenge for Germany,” said Nicholas Burns, a former top American diplomat who now teaches at the Harvard Kennedy School. “It will need to provide even greater leadership to keep Europe united and moving forward.”

Germany, though, has been reluctant to play a diplomatic and military role commensurate with its economic heft. Ever mindful of its Nazi past, and its four decades as a divided country, Germany often wraps its policies in the mantle of Europe and has developed a pacifist instinct that is a poor fit with the expectations that it must now lead.

“There is no point beating about the bush,” Ms. Merkel said Friday. Europe has reached “a turning point,” and “more and more often, we encounter basic doubts” about ever-greater union.

The markers of European decline are not hard to find. For the first time in modern history, Asia has more private wealth than Europe, the Boston Consulting Group said last year. And China will account for 70 percent of Asia’s growth between now and 2019, the group said.

China’s development of its own international bank partly derives from its frustrations over its role in the I.M.F. Policy makers in Beijing were infuriated that they were not granted a bigger share of power at the I.M.F. as a show of gratitude for helping stabilize world economies in 2008.

Many Asian leaders have tended to view the European experiment at unity as a proposition that could not last. Lee Kuan Yew, the former prime minister of Singapore, once called the European Union a motley crowd trying to march to a single drummer. He predicted it would fail.