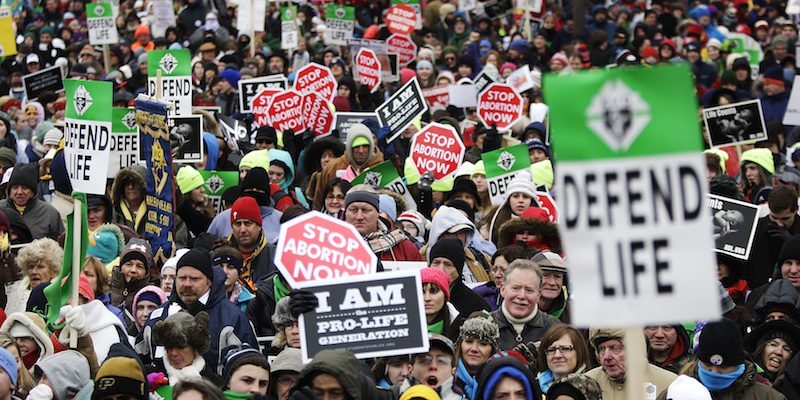 Here’s what you need to know about a piece of legislation passed in the Oklahoma House and Senate May 19 that would make it illegal for doctors to perform abortions that weren’t necessary to save the life of the mother. (Sarah Parnass/The Washington Post)

Lawmakers in Oklahoma approved a bill Thursday that would make performing abortions a felony and revoke the medical licenses of most physicians who assist in such procedures.

This sweeping measure, which opponents described as unconstitutional and unprecedented, now heads to Gov. Mary Fallin (R). She will have five days — not including Sunday — to decide whether to sign the bill, veto it or allow it to become law without her signature, according to a spokesman.

“The governor will withhold comment on that bill, as she does on most bills, until she and her staff have had a chance to review it,” Michael McNutt, a spokesman for Fallin, said in an email.

The Oklahoma bill is the first such measure of its kind, according to the Center for Reproductive Rights, which says that other states seeking to ban abortion have simply banned the procedure rather than attaching penalties like this.

According to the measure, known as SB1552, a person who performs or induces an abortion will be guilty of a felony and punished with between one and three years in the state penitentiary.’ Oklahoma Gov. Mary Fallin, left, has not said if she plans to sign the bill. (Sue Ogrocki/Associated Press)

This legislation also says that any physician who participates in an abortion — deemed “unprofessional conduct” in the bill — will be “prohibited from obtaining or renewing a license to practice medicine in this state.” However, medical licenses will not be stripped from doctors who perform abortions deemed necessary to save the mother’s life.

[Yes, hospitals perform abortions. This D.C. doctor says her hospital won’t let her talk about it]

The bill passed the Oklahoma House of Representatives with a vote of 59-to-9 last month. On Thursday, the state’s senate passed it with a vote of 33-to-12.

“Since I believe life begins at conception, it should be protected, and I believe it’s a core function of state government to defend that life from the beginning of conception,” State Sen. Nathan Dahm, a Republican who represents Tulsa County, told the Associated Press.

Dahm said he hopes the Oklahoma measure could eventually lead to the overturning of Roe v. Wade, the 1973 Supreme Court decision that recognized a woman’s right to an abortion.

Dawn Laguens, executive vice president of Planned Parenthood Federation of America,  said last mont that the Oklahoma bill is “a ban on abortion, plain and simple.” The legislation sent to Fallin on Thursday “is reckless and dangerous,” according to Ilyse Hogue, president of NARAL Pro-Choice America.

“This bill puts doctors in the cross hairs for providing women with the option of exercising our fundamental right to decide how and when to start a family,” Hogue said in a statement. “And it creates penalties for doctors doing their jobs: performing a safe and legal medical procedure.”

The Oklahoma State Medical Association, which has called the measure “troubling,” has said it would not take a position on the legality of abortion as long as the practice remains legal. However, the group said it was opposed to “legislation that is designed to intimidate physicians or override their medical judgment.”

On Thursday, the group reiterated that opposition, calling it “one more insulting slap in the face of our state’s medical providers” and urging Fallin to veto the legislation.

“We are extremely disappointed in today’s vote,” Sherri Baker, president of the medical association, said in a statement Thursday. “It is simply unconscionable that, at a time when our state already faces a severe physician shortage, the senate would waste its time on a bill that is patently unconstitutional and whose only purposes are to score political points and intimidate physicians across this state.”

When the measure was debated in the state’s House of Representatives, a legislator who ultimately voted against the bill pointed to this statement and voiced concerns that the law could lead to doctors abandoning Oklahoma. But one of the bill’s co-sponsors said he did not think it would have an impact.

Since taking office in 2011, Fallin has signed more than a dozen bills restricting access to reproductive health care, the Center for Reproductive Rights, a nonprofit legal group, said Thursday.

The new bill “is blatantly unconstitutional and, if it takes effect, it will be the most extreme abortion law in this country” since the Roe v Wade decision, Amanda Allen, senior state legislative counsel at the center, wrote in a letter to Fallin on Thursday.

Allen said her group was urging Fallin to veto the legislation, which she said was part of a larger pattern of lawmakers in the state chipping away at abortion rights.

“Policymakers in Oklahoma should focus on advancing policies that will truly promote women’s health and safety, not abortion restrictions that do just the opposite,” Allen wrote. “Anti-choice politicians in the state have methodically restricted access to abortion and neglected to advance policies that truly address the challenges women and families face every day.”

Allen also said that the bill would “almost certainly lead to expensive court challenges that the state of Oklahoma simply cannot defend in light of longstanding Supreme Court precedent.”

Fallin has until next week to make a decision on the bill. If this measure does become law, it would go into effect on Nov. 1.