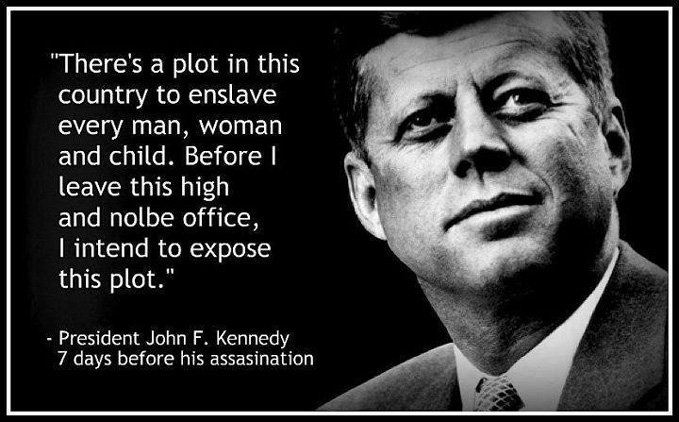 They are called campaigns, which amass war chests, for a very good reason

“So goes the clarion call of longtime conservative and Washington Times columnist Charles Hurt as he eviscerates the motives of National Review following that magazine’s all out declaration of war against current GOP frontrunner, Donald Trump.”

Make no mistake about it, Donald Trump’ campaign is right in the thick of battle.

Not only is he in a fight for his life, he is in engaged in a full-blown war on behalf of the American people.

Regarding Donald Trump: They will kill him before they let him be president

The ruling elites who do control the Global Economic & Financial System appear to see him as a viable threat to their Old and upcoming New World Order (NWO).  Hence, they are employing every war strategy and battle tactic possible to ruin his prospects for the Republican nomination.

Toward that end the Illuminati is now utilizing every stealthy stratagem that they have used to wage all of their wars down through the ages.  The very same war plans they executed in order to control Iraq, conquer Libya, and destroy Syria are now on display throughout this 2016 presidential campaign season.  As a matter of fact, their many machinations of provoking their political opposition through the use of agent provocateurs and implementing little false flag operations wherever it serves their goals are proving to be great instruction for the uninitiated electorate.

Of course, every Trump devotee is getting a ringside seat at the outright thuggery and violent behavior of the ultra-liberal leftwing agents whenever they don’t get their way.   Then, the lefties go on to blame the Trump campaign for the exact criminal conduct that they themselves are perpetrating all over the place.  Not only are they flaming hypocrites but they’re also deceitful gangster types who have no conscience whatsoever.

The TRUMP Campaign has been given notice

Just in case the Trump Campaign is unaware, the gloves have now come off.  This ever-intensifying war is only going to get worse until the Republican Convention.  The RNC itself has done everything but declare war on The Donald, and they mean it.  Truly, Donald Trump is up against the biggest and baddest boys on the block—both blocks as in the GOP and the Democrat blocs.

Given that both major parties have joined forces to stop Trump from getting the nomination, this nation can expect to see an anything-goes battleground complete with Civil War re-enactments, WWII firebombing and Revolutionary War subterfuge.  Everything from false flag shootings and bombings, to violent protests staged at Trump’s every campaign stop, to outright meddling by foreign nations are now in play.  The NWO elites will stop at nothing to destroy The Donald‘s campaign … anyway they can.

Even the normally respectful Bernie Sanders has entered the fray on the orders of his masters as the following headline indicates.  Can one even imagine that the Bern would ever issue such a statement to Hillary Clinton where it is truly deserved?  No way, as Sanders is totally controlled like all the robotized and lobotomized NWO candidates.

Sanders: Trump is a ‘pathological liar’

For Sanders to stoop to such a level illustrates just how vicious this battle is quickly becoming.  What follows are additional headlines which depict the day-to-day escalation of this Political War of the Millennium.  Bear in mind that each of these headlines has been crafted by the rabidly polarizing mainstream media (MSM).  In fact, the MSM has never in American history been so transparent about their intention to fix a presidential election.

Candidate Marco Rubio has also been used by his handlers to slash and burn Donald Trump.

Here are some headlines from the alternative news media which always tend to reveal a perspective much closer to reality.

Then there is this headline at the downright dangerous Huffington Post.  They are proving to be a tabloid rag that is capable of triggering more violence that the infamous New York Times.  The headline below referred to this over-the-top hit piece: The Party Still Decides. Worsening Pattern of the Politics of Personal Destruction

All of the preceding headlines point to one thing — It’s going to get real ugly!

Inasmuch as neither  convention has even taken place things will continue in their downward spiral to the degree that someone is going to get hurt. The elites will take every opportunity to send the message to The Donald that if he does not stand down, they will eliminate him by every means possible and any means necessary.  Yes, they are that determined to torpedo his boat so that it will never — EVER — float again.

While the country watches both sides of the monolithic political juggernaut roll across the land, they are receiving an excellent lesson in how the CIA conducts their color revolutions in foreign nations.  Everything that the Trump campaign is now experiencing has come right from the CIA “divide and conquer” handbook.  The World Shadow Government that really runs the show will ultimately execute every war plan conceived and use every weapon in their arsenal in their attempts to defeat Trump.

Donald Trump needs to be very careful from this point forward.  The Soros-funded leftist political groups and paramilitary organizations are constrained by nothing.  They do not operate in a moral universe; nor are they bound by any ethical code.  Neither does the Soros criminal enterprise ever function within the laws of the land.  Their willingness to resort to violence and zeal for crazy-making chaos knows no bounds.

Clearly, something has to give in 2016.  So much is happening so fast that campaigns which impart the truth can come under direct assault — violent assault — when they least expect it.  The assailants can act from within or come from without.  Therefore, it has never been of such vital importance for the Trump Campaign to assume a highly defensive posture.  Truly, they cannot be careful enough.

Caveat: Donald Trump’s life is now in grave danger.  His family is likewise in great jeopardy.  Anyone associated with the various Trump organizations is also in harm’s way, especially those who perform unique and/or vital services for the campaign.  Hence, it has become compulsory to fight this election war in a manner that reflects the fact that it is in fact a war … a war that is quite likely to get bloody with body bags and all.

The bottom line here is that:
Donald Trump Is In Serious Trouble …
… If He Really Is His Own Man