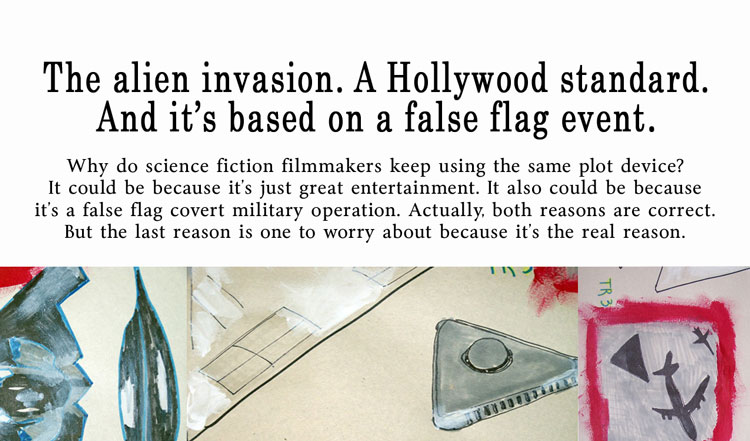 In this clip from the talk Steven
Greer gave in London in September
2015, he discusses what he describes
as the “ultimate false flag”, which
was planned as far back as 1956
by the US Deep State: a fake
Interstellar War, which would follow
the War on Terrorism and subsequent
False Flag events concerning
incoming asteroids.

Greer begins by describing a July
1994 meeting he had in New York
City with the Prince Hans-Adam von
Liechtenstein, the head of state of
that small but wealthy Principality.
Prince Hans-Adam was involved in
various initiatives at the UN and
told Greer that in 1989, he had
been present at a very secret and
classified UN meeting with Mikhail
Gorbachev and others to organize
the announcement that “we’re not
alone” and to end UFO/ET secrecy.
However, while UN Secretary Javier
Perez de Cuellar was on his way to
this meeting, he was “abducted” by
“aliens”. A well-known account of
this event was the subject of the
late Budd Hopkins’ book,
‘Witnessed’.

Prince Hans-Adam claimed that
Perez de Cuellar was was told by
the aliens aboard the craft that if
the UN went forward with its plan
to disclose the truth about
extraterrestrial life, that they would
abduct all of the world’s leaders.
He said this event ‘blew up like an
atomic bomb’ in the George HW
Bush White House.” The Presidents’
summer house in Kennebunkport,
Maine was buzzed by UFOs
throughout his stay there – but he
didn’t realize that these craft were
“ours”.

Greer says, “Now, we’re getting into
‘False Flag 101′, up to and being
able to deceive members of Majic,”
and how people like Budd Hopkins
were led to believe that it was a real
abduction case.

Greer describes the person involved
in a splinter group of Majic, who was
charged with preventing leaks from
within Majic and how he had produced
this entire “abduction scenario” by
means of psychotronic brainwave
entrainment devices, which caused de
Cuellar and others in his motorcade
and in cars on the Brooklyn Bridge to
see and experience that an alien craft
had been there and that his abduction
had been real, as well as that of Linda
Cortile, the main subject of Hopkins’
book, which also cited the UN
motorcade and two Federal agents,
who phoned Hopkins and claimed to
have been present but were later
nowhere to be found. Perez de Cuellar
publicly denied any involvement in the
events cited in Hopkins’ book, which
Greer describes as “100% military ops.”

Greer says that Perez de Cuellar and
Poppy Bush, not being aware of this
end of the classified world, believed
the fake abduction scenario to be real
and, horrified, pulled the plug on any
plans for UFO/ET disclosure, in
November 1989, at the end of the
Cold War.

This was also true of Prince Hans-Adam,
who said he was financing abduction
researchers, like Budd Hopkins, Temple
University History Professor David
Jacobs, as well as Harvard University
Psychology Department Chairman,
Dr. John Mack, to have them spread
a fear and loathing of extraterretrials.
He did say of Mack that he “wasn’t
going to finance him anymore” because
he was reporting on the positive
experiences of his subjects. The Prince
of Lichtenstein was convinced by Perez
de Cueller’s telling of his experience that
the aliens would not allow disclosure.

An fascinating potential backstory to
this UN initiative emerged from Wendelle
Stevens – or rather, from his friend,
Argentinean UFO investigator and author,
Pedro Romaniuk, who was flown to
Russia by the Gorbachev government for
a 2-week visit, during which he learned
the story of Mikhail Gorbachev’s Indigo
son, Aldes.

Aldes was alleged to be an extraterrestrial
from the Pleiades Constellation who was
born as a human to Gorbachev’s wife,
Raisa in 1977 and that the same group
of aliens who very publicly landed in a
city park of Voronezh, in 1989 were
instrumental in the meteoric rise of
Gorbachev’s career in Soviet politics – and
as the instigator of its dismantling.