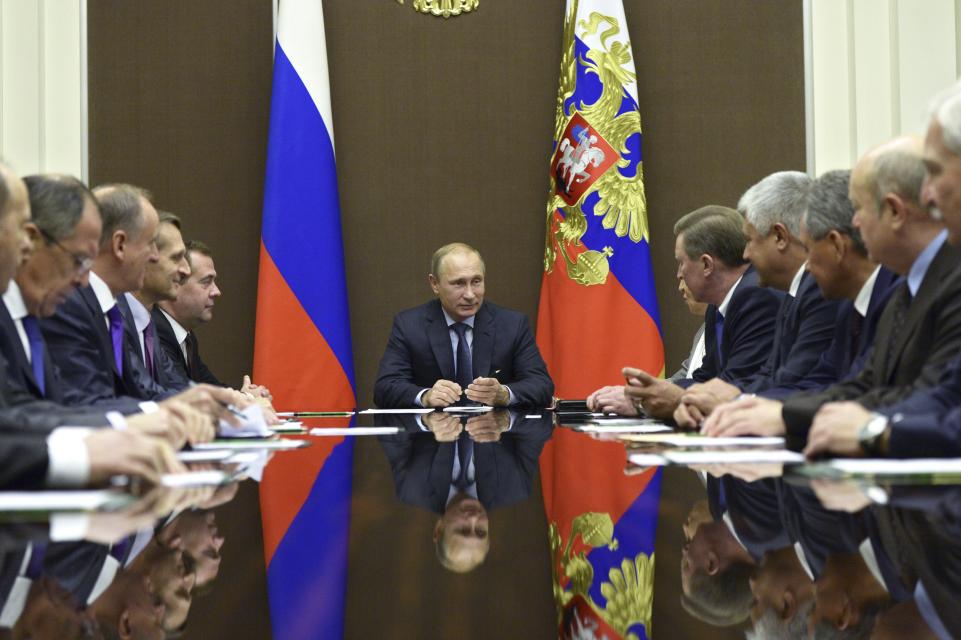 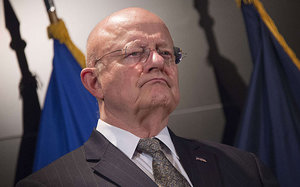 © JIM WATSON/AFP/Getty
American Intelligence chief James Clapper: ‘Am I not awesome? Look at how exceptional I am!’

–
The recent Telegraph exclusive publishing specious claims by ‘anonymous US sources’ that Russia is covertly ‘undermining EU unity’, specifically by conducting “Kremlin influence operations” and infiltrating political parties, is the latest in a long line of hysterical nonsense from the self-styled ‘exceptional’ rulers of the world. Can you believe the gall of these idiots? Their lies are so obvious, you can only shake your head at how desperate they have become.

By the time we came of age, the paranoid insanity of the “Red Menace” had long become something to look back and cringe at. ‘Russian spies dividing Europe’ was the hallmark of a Cold War in which every subversive (and often violent) act of US foreign policy was justified because ‘the Russians are doing it’. The US has been, and is, infiltrating various European political parties – and even Russian ones – via its Orwellian “Non-Governmental Organizations”, spreading US influence and buying politicians who will be subservient to the Empire. And that’s just the ‘soft power’ stuff. There’s also a sordid history of overthrowing governments, rigging elections, bribing (and even assassinating) leaders – and it’s an unbroken chain right up to the 2014 overthrow of the Yanukovich government in Kiev. So it is rather galling to see the US State Department accusing others of doing something for which it is infamous.

The Telegraph article is itself an example of the Western elites doing what they accuse the Russians of doing. Not only are these Anglo-American hypocrites spreading false information, in the process they are projecting what they are doing onto the Russians, whose ‘crime’ is to take an independent stance on certain global issues. Others have already ripped the claims to shreds, so we just want to draw your attention to a couple of points.

Here we have a British ‘newspaper of repute’ (one that is notorious for operating as an arm of British intelligence) announcing that American intelligence will conduct a “major investigation” – led by US Director of National Intelligence James “not willfully” Clapper – into the Kremlin’s ‘infiltration’ and alleged secret funding of European political parties over the last decade. Additionally, The Telegraph informs us, Washington is “becoming concerned about” Moscow’s alleged efforts to undermine NATO, block US missile defense and undo the Western sanctions imposed on Russia after it rescued Crimea from Ukraine’s deadly embrace with Western ‘civilization’.

The sanctions against Russia are harming EU countries more than they are Russia, so there is no need for Russia to ‘covertly stoke dissension in Europe’ over them. By blaming Russia for that, the Washington Crazies can clamp down on such dissent in Europe. At this rate, some day soon, a European official is going to be accused of ‘treason’ for saying something that goes against the US government position (more on that later).

And as for Russia trying to block the US installing missiles in Europe, of course it is: they’re pointed at her!

“…it is really a new Cold War out there. Russia’s meddling is taking on a breadth, range and depth far greater than previously thought. Right across the EU we are seeing alarming evidence of Russian efforts to unpick the fabric of European unity on a whole range of vital strategic issues.”

For about a century now, so-called ‘European unity’ has been founded on Anglo-American hegemony and manipulation. A key element of hegemony is that the hegemon can brook no ‘rivals’. Russia, being the largest country and economy in Europe – or Europe’s largest neighbor, depending on your geographical or geopolitical standard – is naturally best positioned to replace the USA as ‘guardian of Europe’. The Anglo-American elite is determined to prevent this from happening, which is why it dreams up extreme and fantastical stories about Putin’s alleged crimes. The Russian government, on the other hand, merely has to report the truth for Western lies and crimes to be exposed. In this respect, yes, Russia’s efforts to play fair are, by default, having the effect of unpicking the fabric of lies on which US-controlled Europe is built. But all it needs to do to achieve that is hold up a mirror – no “subversive infiltration” required.

By contrast, anyone hoping that the Telegraph would be transparent – i.e., provide facts to support the Americans’ extraordinary claims – will be disappointed. All the newspaper could do was suggest that it has been privy to a mysterious dossier on “Russian influence activity” which details “Kremlin influence operations” in France, the Netherlands, Hungary, Austria and the Czech Republic. Scary!

Imagining for a moment that the Anglo-Americans actually do provide facts to support their claims (highly unlikely), since when did exerting influence on people become a bad thing? In the civilized world, where such ‘influence activity’ involves payment, it’s generally considered to be bribery. In Washington and Brussels however, it’s called ‘corporate lobbying’, and is considered to be the pinnacle of democratic government.

So with clear echos of the McCarthyism of the 1950s (the practice of making accusations of subversion or treason without proper regard for evidence), the US intelligence review is set to “examine the extent to which Russian security services have funded European political parties, charities, and NGOs, allegedly with the express aim of undermining political cohesion”. Unlike the 1950s however, there’s isn’t even a ‘ghastly Communist ideology’ to mask the obvious target of Washington’s ire: Russia and anyone suspected of sympathizing with the Russian government.

The Telegraph cites a visit by an Austrian MP to Crimea last year, on a fact-finding mission to gauge Crimean public opinion about the territory’s return to Russia, as evidence of “Moscow-based destabilization” in Europe. French politicians have engaged in similar ‘disloyalty’. Italians too.

Anything that might be construed as supporting Russia is verboten under US hegemony. And that is the dark underlying message behind all this. Russian diplomacy and business affairs at the state level have been impeccable since Putin came to power, so European leaders can’t help but be drawn to Russian trade and Russian initiatives. The target audience of the Anglo-Americans’ McCarthy-esque accusations are Europeans, who are warned that they will be publicly exposed as ‘communists’, and likely face punitive measures, if they ‘associate with the enemy’.

The Telegraph article – and the US ‘intelligence review’ it advertises – is another power move by Washington, a not-so-subtle message to Europeans who might be reconsidering their allegiances. The message is: ‘you will be investigated, you will be considered as being under Russia’s influence, and you might even be punished for any transgressions’. That is the extent of the fascism that has spread from the US to Europe. If Europe continues allowing the US to control it, it will become just as fascistic as the US already is. Will Europeans stand up for what they know is right, or will they bow down to their imperial masters and allow the US to, for all intents and purposes, take even greater control of Europe? This is more than a regional issue: the fate of the world is in the balance.

It is, however, a desperate gamble by the US ‘elite’, and one that we can confidently say is not going to work. In reality, normalizing relations with Russia is what is best for Europe – and the world – since it represents sane and humane government, in contrast to the power-hungry and psychopathic ‘Western order’, which projects its own actions and motivations onto anyone who dares stand up to it.

In truth, of course, the reason why social justice movements, traditionalist organizations, politicians of every stripe, and conscientious people the world over see Russia in a positive light is because they have seen all the good Russia does in fighting ISIS, protecting the Syrian people, being a peacemaker, and showing respect for national sovereignty. In Putin they see someone who is not afraid to stand up to the bully. Don’t underestimate the sense of empowerment this engenders in human beings. The Anglo-American elite certainly don’t.