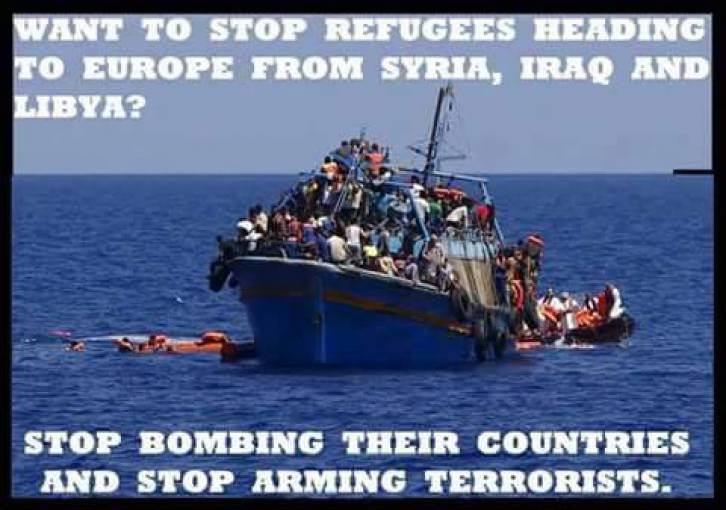 Europe is on a dangerous, slippery slope of increasing xenophobia and racism engendered by the influx of refugees. Denmark’s new confiscation law is a sign of the brooding, baleful climate.

But the real answer to the problem is dealing with Europe’s support for Washington’s criminal wars. In other words, citizens of Europe should be addressing the root cause of the problem, not reacting to the symptoms. We should be shaming the villains, not blaming the victims.

We should be demanding legal sanctions and prosecution of government leaders over what are gross violations of international law.

European governments stand accused of war crimes, yet we allow them to get away with mass murder. Then when we incur secondary problems such as the massive displacement of refugees from wars and conflicts – that our governments have fomented – we illogically and cravenly focus on blaming the victims of our governments’ criminality.

Part of the public shaming of the villains would involve holding those European members of the US-led NATO military alliance accountable to international law. Individual government and military leaders should be prosecuted for war crimes and crimes against peace. The inculpating evidence is out there. The fact that European governments have waged dubious overseas wars – with impunity – is the real shame and root of the problem.

Wars in former Yugoslavia, Afghanistan, Iraq, Libya, Syria and Ukraine, as well as drone assassinations in Pakistan, Somalia and Yemen, plus covert military operations in Mali, Niger and Ivory Coast have all involved complicity of European member states. Britain and France in particular have been most prominent in carrying out US-led NATO military interventions, both overt and covert, as in Libya and Syria, respectively.

The countless millions of people displaced across Central Asia, the Middle East and Africa are a direct result of European militarism in conjunction with that of Washington. Even the French intervention in Mali and Central Africa Republic are questionable under international law. Both were launched without United Nations Security Council resolutions.

Over the past five years, Libya perhaps represents the most egregious case of illegal war conducted by NATO and its European members, including Norway, Denmark, Netherlands, Italy in addition to Britain and France. Along with the US, these countries violated a UN mandate to bomb Africa’s most prosperous and stable country into a bloody shambles. Thousands of civilians were killed in the seven-month US-EU blitzkrieg, culminating in the brutal murder of leader Muammar Gaddafi.

Libya was ransacked into a failed state, over-run by illegally armed extremist groups, and it was European governments who authored the descent into barbarism. Where are the calls for justice for these atrocious crimes in so-called civilized, law-abiding, Nobel-prize-winning Europe?

Yet last week, American and European military chiefs were calling for even more military intervention in Libya and Syria. This declaration of military intervention – regardless of its stated purpose of “fighting terrorism” – is in itself an act of illegal aggression under international law; according to respected war crimes lawyer Christopher Black, speaking to this author. So, where was the public outrage and calls for prosecution over this flagrant bout of more criminality by our European governments and their American ally?

Even where countries have not been directly hit by NATO’s military, such as Eritrea, Sudan and Cameroon, refugees coming from such places are doing so largely because of the lawless gateway-to-Europe that Libya was turned into by NATO’s destruction.

This week we see the Danish parliament voting into law measures which allow its police to confiscate assets of asylum-seekers worth more than $1,400. The move has caused international controversy out of concern that the Danish authorities are infringing on human rights.

The Danish law is only one in a litany of grim signs that Europe is becoming an increasingly hostile place towards refugees. Countries like Hungary, Slovenia, Poland and Austria are closing their borders. Even formerly more open Germany and Sweden are restricting the intake of refugees and sending many back to where they came from.

On one hand, it is understandable that residents in different countries are alarmed by the surge in the numbers of foreign nationals. Especially when the foreigners are visibly different in color, dress and religious practice. Let’s cut to the chase. Muslims from North Africa and the Middle East are of concern for many Europeans.

The spate of sex assaults in German and Swedish cities allegedly carried out by “Arab-looking young men” has fueled a popular backlash. But there is a danger of hysterical over-reaction that feeds political interests of racist groups. A French magazine cartoon depicting the little Syrian boy who died from drowning as a grown-up sex attacker is a despicably irresponsible incitement.

So too is tarring refugees as “terrorist sympathizers”. Following the jihadist terror attacks in Paris on November 13, there has been a dramatic rise in anti-Muslim hate assaults reported in Britain and France. The Paris terrorists may have infiltrated with the droves of Syrian refugees into Europe.But surely the real focus should be on why and how these jihadists went to Syria in the first place. And why are millions of people being displaced from that country.

This week it was also reported that asylum-seekers in Britain are being forced to wear brightly colored wristbands in order for them to qualify for food handouts. The visible form of identity has led to the wearers being abused on the streets, according to the Guardiannewspaper.

Comment: Apparently no one in the UK learned anything from the lessons of the Nazis in Germany. There is surely a better way for someone to qualify for food than to make them a walking target for xenophobic racists.

Previously, asylum-seekers in the British town of Middlesbrough had their house doors painted red by a local authority. Again, the discrimination led to attacks by racist thugs.

Whether officially or unofficially, Europe is becoming a racist, xenophobic fortress. Given the continent’s own history of war, displacement, fascism and genocidal persecution it should be deeply troubling that it is once again on a slippery slope to such nihilistic mentality. It is doubling worrying when we hear apologists for hard-line measures against refugees talking about “preserving European blood and culture.” Given Europe’s millennia of migrations, what “pure blood” is there to talk of apart from malign mythical notions?

Europe’s refugee “crisis” is turning into an irrational, xenophobic panic that is not justified by facts. It is misleading people into dangerous political territory of persecution, racist discrimination and ultimately fascist societies that infringe on all our rights as citizens.

But far more importantly, the misplaced hysteria over refugees is a distraction from the real issue. Which is that European states are complicit in illegal wars of aggression and covert regime-change interventions.

Political leaders like Britain’s David Cameron and France’s François Hollande, as well as Nicolas Sarkozy before him should be prosecuted in an international court for crimes against peace. European citizens not holding their rogue governments to account is the real problem.

Shame the villains, don’t blame the victims. If we don’t stand up to lawless tyranny, then we are its next victims.