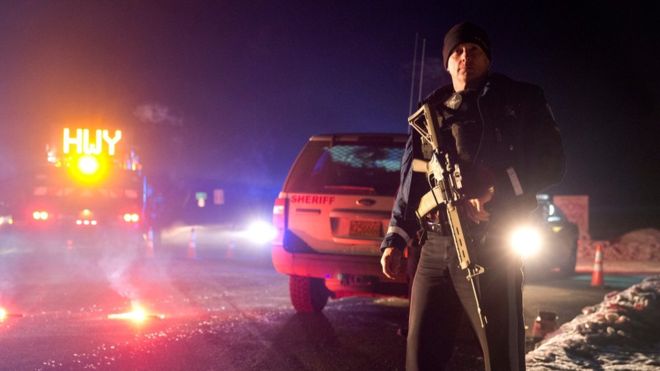 US police say they have arrested the leader of an armed militia which has occupied a wildlife refuge in Oregon, with one person killed in a shootout.

Ammon Bundy and four others were arrested during a traffic stop. One person was injured. Three others were held in separate incidents.

The militia occupied the refuge on 2 January to support two ranchers jailed for setting fire to federal land.

They say the government has taken land illegally from ranchers for decades.

Other members of the group were reportedly still at the Malheur National Wildlife Refuge in eastern Oregon, where the FBI was setting up a perimeter.

On Oregon’s snowy plains, over the past few weeks, there has been some sympathy for the leaders of the occupation. Many people in the little town of Burns said they understood the militia’s message about federal government “interference.”

The federal government is not popular with ranchers in Harney County who accuse it of failing to respect a distinct way of life. But there was also hostility to the tactics employed by Ammon Bundy and his followers.

Armed militiamen rumbling in and out of town to gather supplies made residents nervous. So, too, did the presence of the FBI. The community had repeatedly asked the militia to leave but law enforcement officials had come in for criticism, too, accused of passivity in the face of flagrant criminality.

In recent days the pressure had mounted, with Oregon’s Governor Kate Brown writing to the White House to demand federal action to end the stand-off. But with both sides heavily armed, violence was always a possibility when, and if, that moment came.

Inside the US refuge seized by militiamen

FBI officials said in a statement that Mr Bundy, 40, was arrested in a traffic stop on Highway 395 along with his brother Ryan Bundy, 43, Bryan Cavalier, 44, Shawna Cox, 59, and Ryan Walen Payne, 32.

Two other activists connected to the group, Joseph Donald O’Shaughnessy, 45, and Peter Santilli, 50, were later arrested, separately, in Burns, Oregon.

Each of the defendants faces a charge of conspiracy to impede police from discharging their official duties through the use of force, intimidation, or threats, the FBI said.

According to the Oregonian newspaper, Mr Bundy was en route to a community meeting in John Day, Oregon, where he was scheduled to be a guest speaker, when authorities stopped his vehicle.

The newspaper said Ryan Bundy was injured in the arrest, suffering a minor gunshot wound. Authorities did not release the identity of the person killed.

However, local media named the man as Arizona native Robert “LaVoy” Finicum, a regular spokesman for the group.

His daughter, Arianna Finicum Brown, told The Oregonian he was a “good, good man, through and through”.

Some 25 miles (40 km) of Highway 395 was shut in both directions following the incident, local officials said.

Another occupier of the refuge, Jon Eric Ritzheimer, 32, surrendered to police in Arizona on Tuesday night.

How did it begin?

In October, a federal judge ruled the sentences on two Oregon ranchers, Dwight and Steven Hammond, for burning federal land were too short and jailed them for about four years each.

His group attracted supporters from across a number of states and Mr Bundy called it Citizens for Constitutional Freedom. On 2 January the armed militiamen took over the Malheur National Wildlife Refuge – and widened the range of demands.

What are the militia’s aims?

It is an extension of the Sagebrush Revolution of the 1970s and 1980s that demanded the transfer of federal land in many western states to local control.

Mr Bundy’s own father – a Nevada rancher – had been involved in a protest over cattle-grazing rights in 2014. One policy is to try to persuade ranchers to tear up their federal grazing contracts.

Although many local residents are sympathetic with its cause, many also oppose the occupation of the refuge. Even the local ranchers who are serving the longer sentences distanced themselves from the militia.

How has the FBI responded?

Initially in a low-key manner. The FBI was fearful of a repetition of the bloody end to the siege at Waco in Texas in 1993.

Local and state officials had demanded the FBI do more.

The term has a complex history and generally refers to those outside the official military who can be called on in times of need. The US Constitution refers to the president having command of “militia of several states” and that Congress “can call forth militia” to tackle insurrection and invasion.

Those who form such militias cite the constitution and various references in federal and state law as granting them legality.