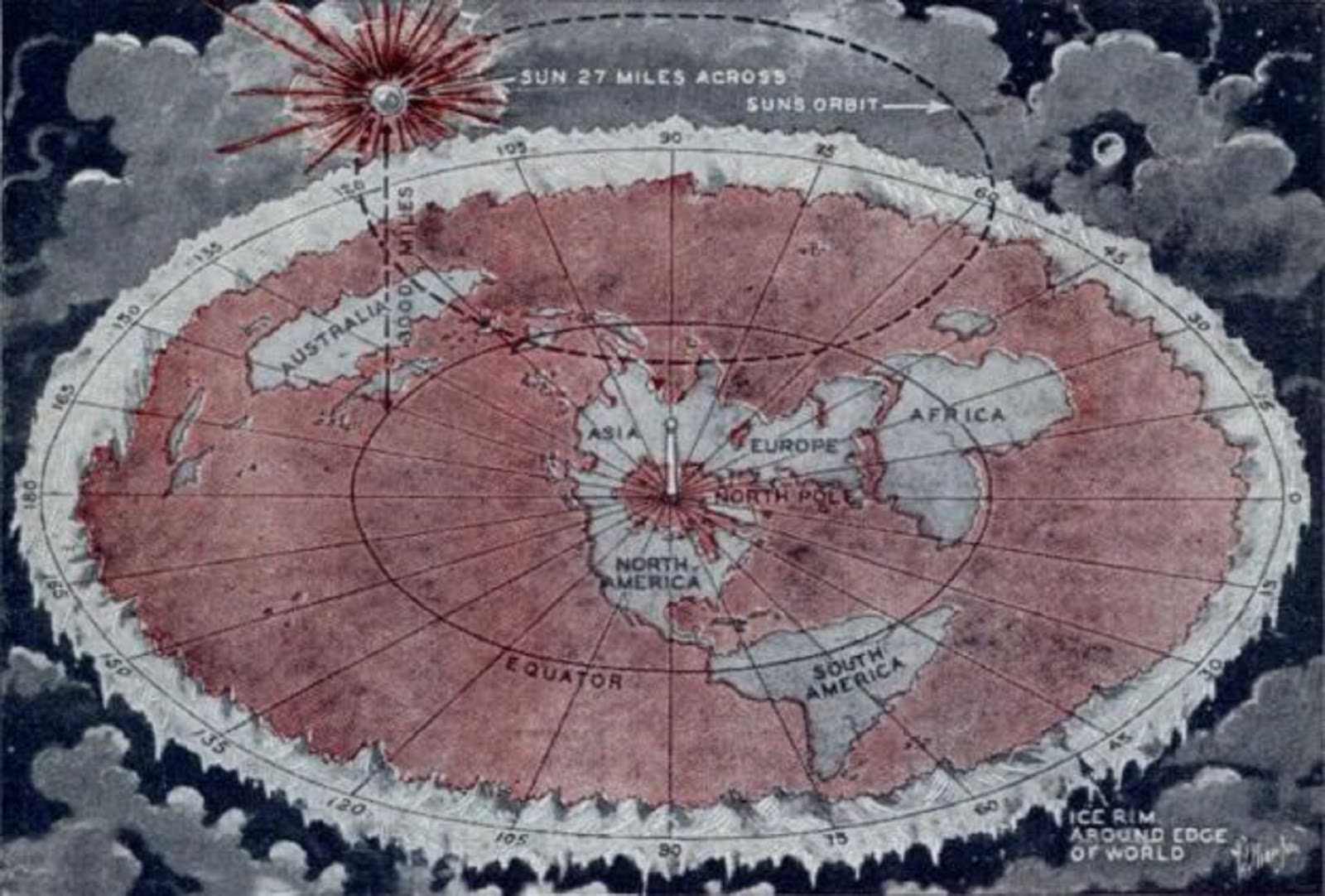 Flat Earth Theory: A Purposeful Distraction and Powerful Diversion by The Powers That Be

TMR Editor’s Note:
There is perhaps no other internet hoax that is more ludicrous than the Flat Earth Theory. We’re talking about the most nonsensical and preposterous, laughable and foolish hoax in history!   Yes, it is that zany and loony, wacky and silly.

However, what is really crazy is how many people are buying into it.  That is where the silliness ends and the serious PSYOP begins.  That is also where the Tavistock Institute intersects with the NSA, Facebook collaborates with the CIA, and YouTube and Google really drive some heavy traffic IN THE WRONG DIRECTION.  The spooks are watching the evolution of this PSYOP very, very closely.  After all, they started it.

“Very astute observation from a commenter at Godlike Productions.” — TMR

All anyone has to do is read the following post by the Thunderbolts scientists and they will quickly understand the error and folly of the hysterical Flat Earth Theory hoax.

How’s that for an elegant and thoroughly scientific theory of astrophysics—an Electric, Plasma-filled Universe ?!

Here is one more enlightening piece for the all flat earthers: The Thunderbolts Project.  Perhaps they can send these two links to their handlers at the Tavistock Institute.

CCRG Editor’s Note:
If ever the CIA and/or Tavistock Institute wanted to test out a new mind-control program, the Flat Earth Theory would be the perfect theme for the program.  As most know by now, the CIA has been running covert mind-control experiments on various segments of humanity for decades.  With the internet being a global platform, the opportunities for the intelligence agencies to advance their mind-control agenda, as well as test their techniques and technologies, have increased and intensified considerably.

Facebook Proves Itself To Be Another CIA-Managed Media Experiment

There is no greater example on the internet today of inciting people of every ilk toward  “throwing the baby out with the bathwater” than the utterly ludicrous phenomenon known as the Flat Earth Theory. What is truly shocking is the number of really smart and aware, well-intentioned and spiritually oriented individuals who are supporting this transparent pseudo-scientific sham.  Truly, the CIA has outdone itself with this mind-scrambling endeavor.

Yes, scientific knowledge and applied technology have been egregiously abused and misused throughout the modern era, as this website has frequently pointed out.  That is exactly the sentiment a “CIA” would like to exploit; however, true scientific paradigms based on common sense and human reason ought not to be whimsically replaced by pure fantasy and fiction … even if the Tavistock Institute provides every rhyme and reason to do so.

“When scientific knowledge and applied technology reach a critical level of advancement, without being informed by spiritual truths and guided by moral authority, the planetary civilization will relinquish its destiny to continue as it is.”
(Source: Cosmic Convergence Accelerates Epochal Planetary Transformation)

Quite incredibly, this ridiculous notion — that Planet Earth is really flat — has been enthusiastically embraced by thought leaders and light-workers everywhere. Their primary reason for entertaining such an absurd ‘hypothesis’ is because it takes such a strong anti-science establishment position; otherwise, there is simply no good rational reason for assuming such a sympathetic posture toward this very bad cyber-space joke.

Truly, if the dark side wanted to undermine the workings of the authentic New Age movements, deliberately disseminating a Flat Earth Theory would be a great way of doing so. They probably never imagined in their wildest dreams that so many would climb on board such a farcical disinfo initiative …  …  … did they?!

Are Flat-Earthers Being Serious? Members of the Flat Earth Society claim to believe the Earth is flat. Walking around on the planet’s surface, it looks and feels flat, so they deem all evidence to the contrary, such as satellite photos of Earth as a sphere, to be fabrications of a “round Earth conspiracy” orchestrated by NASA and other government agencies.

The belief that the Earth is flat has been described as the ultimate conspiracy theory. According to the Flat Earth Society’s leadership, its ranks have grown by 200 people (mostly Americans and Britons) per year since 2009. Judging by the exhaustive effort flat-earthers have invested in fleshing out the theory on their website, as well as the staunch defenses of their views they offer in media interviews and on Twitter, it would seem that these people genuinely believe the Earth is flat.

But in the 21st century, can they be serious? And if so, how is this psychologically possible?

First, a brief tour of the worldview of a flat-earther: While writing off buckets of concrete evidence that Earth is spherical, they readily accept a laundry list of propositions that some would call ludicrous. The leading flat-earther theory holds that Earth is a disc with the Arctic Circle in the center and Antarctica, a 150-foot-tall wall of ice, around the rim. NASA employees, they say, guard this ice wall to prevent people from climbing over and falling off the disc. Earth’s day and night cycle is explained by positing that the sun and moon are spheres measuring 32 miles (51 kilometers) that move in circles 3,000 miles (4,828 km) above the plane of the Earth. (Stars, they say, move in a plane 3,100 miles up.) Like spotlights, these celestial spheres illuminate different portions of the planet in a 24-hour cycle. Flat-earthers believe there must also be an invisible “antimoon” that obscures the moon during lunar eclipses.

Furthermore, Earth’s gravity is an illusion, they say. Objects do not accelerate downward; instead, the disc of Earth accelerates upward at 32 feet per second squared (9.8 meters per second squared), driven up by a mysterious force called dark energy. Currently, there is disagreement among flat-earthers about whether or not Einstein’s theory of relativity permits Earth to accelerate upward indefinitely without the planet eventually surpassing the speed of light. (Einstein’s laws apparently still hold in this alternate version of reality.)

As for what lies underneath the disc of Earth, this is unknown, but most flat-earthers believe it is composed of “rocks.” [Religion and Science: 6 Visions of Earth’s Core]

Then, there’s the conspiracy theory: Flat-earthers believe photos of the globe are photoshopped; GPS devices are rigged to make airplane pilots think they are flying in straight lines around a sphere when they are actually flying in circles above a disc. The motive for world governments’ concealment of the true shape of the Earth has not been ascertained, but flat-earthers believe it is probably financial. “In a nutshell, it would logically cost much less to fake a space program than to actually have one, so those in on the Conspiracy profit from the funding NASA and other space agencies receive from the government,” the flat-earther website’s FAQ page explains.

The theory follows from a mode of thought called the “Zetetic Method,” an alternative to the scientific method, developed by a 19th-century flat-earther, in which sensory observations reign supreme. “Broadly, the method places a lot of emphasis on reconciling empiricism and rationalism, and making logical deductions based on empirical data,” Flat Earth Society vice president Michael Wilmore, an Irishman, told Life’s Little Mysteries. In Zetetic astronomy, the perception that Earth is flat leads to the deduction that it must actually be flat; the antimoon, NASA conspiracy and all the rest of it are just rationalizations for how that might work in practice.

Those details make the flat-earthers’ theory so elaborately absurd it sounds like a joke, but many of its supporters genuinely consider it a more plausible model of astronomy than the one found in textbooks. In short, they aren’t kidding. [50 Amazing Facts About Planet Earth]

“The question of belief and sincerity is one that comes up a lot,” Wilmore said. “If I had to guess, I would probably say that at least some of our members see the Flat Earth Society and Flat Earth Theory as a kind of epistemological exercise, whether as a critique of the scientific method or as a kind of ‘solipsism for beginners.’ There are also probably some who thought the certificate would be kind of funny to have on their wall. That being said, I know many members personally, and I am fully convinced of their belief.”

Wilmore counts himself among the true believers. “My own convictions are a result of philosophical introspection and a considerable body of data that I have personally observed, and which I am still compiling,” he said.

Strangely, Wilmore and the society’s president, a 35-year-old Virginia-born Londoner named Daniel Shenton, both think the evidence for global warming is strong, despite much of this evidence coming from satellite data gathered by NASA, the kingpin of the “round Earth conspiracy.” They also accept evolution and most other mainstream tenets of science.

DISCLAIMER:
The Millennium Report does not endorse this Live Science (LS) article treatment of the subject of Conspiracy Theory.  The LS article was posted to show the MSM (mainstream media) perspective on the Flat Earth Theory.   As for TMR, here is our take on the whole “Conspiracy Theory” phenomenon.
How the “Conspiracy Theory” label was conceived to derail the Truth Movement