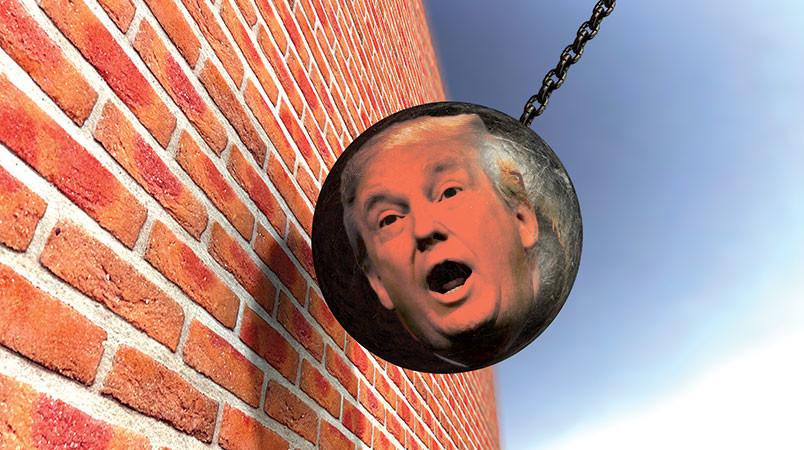 Trump: He Can Only Go in One of Two Directions — Each Comes With a Huge Consequences

SOTN Editor’s Note:
The following commentary by Paul Craig Roberts irrefutably explains why Donald Trump will eventually become a creature of the very system that he scorns.  Especially if he were to be elected is that outcome preordained.

The Trumpsters certainly do not want to hear such an objective evaluation about their fearless leader, particularly from one so analytical as ex-Republican Paul Craig Roberts. Roberts raises critical issues which cannot be avoided or ignored.  His post-election breakdown clearly delineates the political realities that any president would face.

In the case of a Trump victory he would be forced to face 9/11 Truth and Obama’s fictitious birth certificate, the bogus assassination of Osama bin Laden and the international crime syndicate known as the Federal Reserve.  These are only a few of the major challenges that Trumps supporters would bring to his doorstep.

Irrespective of Roberts’ penetrating analysis, Trump would inevitably be subsumed by the very regime that rules the planet.  The U.S. Government ‘monster’ (it is that and much more) that he is now attacking quite courageously and effectively owns everything … as in EVERYTHING!  Trump knows that as well as anyone in the game.  The essay linked below further explains what The Donald understands and will therefore ultimately be forced to accommodate.

So, there are essentially only 2 scenarios concerning a Donald Trump presidency.  The first is that he is eventually co-opted — COMPLETELY — just as every other president has been since JFK.

The second scenario is the one where The Donald really does leave the reservation.  In that case he is facing two highly antagonistic parties: (i) the Democrats will fight him tooth and nail and (ii) the Republicans will undermine his governance at every opportunity.  Should he try to do anything really bold, he will simply be JFKed.

These are the only two prospective outlooks for a Trump presidency.  And he knows it. Therefore, it is more than likely that he will go over to the other side once elected. He has already shown that can play the part of a political actor — transparent to those who know his show well, not so obvious to the great majority, however.

In the final analysis this upcoming election is not about Donald Trump or Hillary Clinton, it’s about the American people and the true state of the nation.  Neither candidate nor the two parties can fix the current national predicament.  Only a collapse of the whole System will permit the proper re-establishment of the original American constitutional republic.

Sorry to say it to so many hopeful Trumpsters, but The Donald is not here to rebuild the System, he is here to knock it down.  He’s a much better wrecking ball at this stage of his career so why not let him have at it.  He’s been doing a wonderful job!  Just ask him.

One last point: The GOP had profoundly betrayed its core principles as well as the lifelong members of the party throughout Obama’s two disastrous terms.  The deceitful RINO leadership has in fact enabled the Obama Administration to destroy the USA while debasing American society.  In this particular regard Donald Trump cannot do enough wrecking, and again he is doing a fabulous job. Lastly, SOTN gives Donald Trump much credit for exposing the whole ungodly System as no other presidential candidate in U.S. history.  The following link reveals the true depth and breadth of his extraordinary achievement, which has come at a great cost to his reputation and his business empire.

DONALD TRUMP has the courage of his convictions and speaks truth to power as no other candidate in U.S. history

Donald Trump, judging by polls as of December 21, 2015, is the most likely candidate to be the next president of the US.

Trump is popular not so much for his stance on issues as for the fact that he is not another Washington politican, and he is respected for not backing down and apologizing when he makes strong statements for which he is criticized. What people see in Trump is strength and leadership. This is what is unusual about a political candidate, and it is this strength to which voters are responding.

The corrupt American political establishment has issued a “get Trump” command to its presstitute media. Media whore George Stephanopoulos, a loyal follower of orders, went after Trump on national television. But Trump made mincemeat of the whore.

Stephanopoulos tried to go after Trump because the world’s favorite leader, President Putin of Russia, said complimentary things about Trump, and Trump replied in kind.

According to Stephanopoulos, “Putin has murdered journalists,” and Trump should be ashamed of praising a murderer of journalists. Trump asked Stephanopoulos for evidence, and Stephanopoulos didn’t have any. In other words, Stephanopoulos confirmed Trump’s statement that American politicians just make things up and rely on the presstitutes to support invented “facts” as if they are true. Trump made reference to Washington’s many murders.

Stephanopoulos wanted to know what journalists Washington had murdered. Trump responded with Washington’s murders and dislocation of millions of peoples who are now overrunning Europe as refugees from Washington’s wars. But Trump’s advisors were not sufficiently competent to have armed him with the story of Washington’s murder of Al Jazerra’s reporters.

Here is a report from Al Jazeera, a far more trustworthy news organization than the US print and TV media:

“On April 8, 2003, during the US-led invasion of Iraq, Al Jazeera correspondent Tareq Ayoub was killed when a US warplane bombed Al Jazeera’s headquarters in Baghdad.

“The invasion and subsequent nine-year occupation of Iraq claimed the lives of a record number of journalists. It was undisputedly the deadliest war for journalists in recorded history.

“Disturbingly, more journalists were murdered in targeted killings in Iraq than died in combat-related circumstances, according to the group Committee to Protect Journalists.

“CPJ research shows that “at least 150 journalists and 54 media support workers were killed in Iraq from the US-led invasion in March 2003 to the declared end of the war in December 2011.”

“’The media were not welcome by the US military,’” Soazig Dollet, who runs the Middle East and North Africa desk of Reporters Without Borders told Al Jazeera. ‘That is really obvious.’”

A political candidate with a competent staff would have immediately fired back at Stephanopoulos with the facts of Washington’s murder of journalists and compared these facts with the purely propagandistic accusations against Putin which have no basis whatsoever in fact.

The problem with Trump is the issues on which the public is not carefully judging him. I don’t blame the public. It is refreshing to have a billionaire who can’t be bought expose the insubstantialality of all the Democratic and Repulican candidates for president. A collection of total zeros.

Unlike Washington, Putin supports the sovereignty of countries. He does not believe that the US or any country has the right to overthrow governments and install a puppet or vassal.

Recently Putin said: “I hope no person is insane enough on planet earth who would dare to use nuclear weapons.”

Unfortunately for Putin and for Trump, if news reports can be believed, Trump recently said that he would use nuclear weapons against ISIS. This is a disqualifying statement. There is no reason to need nukes to defeat a force as small as ISIS. More importantly, as the US is the only country to use nuclear weapons against the population of another country, for the US to do so again would confirm for the Russian and Chinese governments that the US government is insane, untrustworthy, and in need of extermination before Russia and China are attacked. You cannot use nuclear weapons without consequence.

Recently I watched a video of a woman described as a “Trump advisor” who repeaded neocon nazi William Kristol’s statement: “What’s the use of nuclear weapons if you can’t use them?”

How did a William Kristol neocon nazi get on Trump’s staff? What more proof do we need that even if Trump is elected, the establishment will prevail despite Trump.

Trump cannot be a dissident politician without a dissident staff. He doesn’t know the people who would comprise a dissident staff. Trump knows how to make deals, and the Establishment will staff up a Trump presidency with deals. The minute Trump takes office, he would be already captured.

In France Marine Le Pen’s National Front Party could bring political change. In the UK Nigel Farage’s UK Independence Party or Jeremy Corbyn’s Labour Party could bring political change. But in the US there is no prospect of change from elections. Change can only come from collapse or from bloody revolution. The American Establishment will not accept change.

And most likely, the American Establishment would assassinate Le Pen and Farage and Corbyn before accepting change in France and the UK.

These are the facts on the ground. How Russia and China deal with them remains to be seen.

Dear Mr. Roberts, I want to comment your article \”Donald Trump: An Evaluation — Paul Craig Roberts\” in which you provided an example when Washington killed journalists – US warplane bombed Al Jazeera’s headquarters in Baghdad during US-led invasion of Iraq in 2003. I want to provide another example – during Washington led NATO bombing of Yugoslavia in 1999 NATO warplanes bombed headquarters of the Radio Television of Serbia killing 16 people and wounding another 16. I also want to thank you for giving us excellent insight into complex economic and political issues revealing true nature of the evil imperialists in Washington. bestregards from Croatia/Igor

*All emphasis by way of boldface and underlining performed by ZeroHedge.com