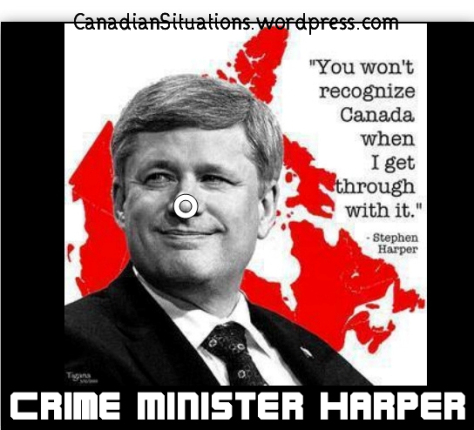 We would like to thank all of our readers and also the news sources we have accessed over the years (even the Post Media ones, because some of the investigative journalists have exposed Harper crimes, even if the owners are shameless Harper supporters.)

Despite the pain and anxiety he has caused to many Canadians, Stephen Harper has taught us a valuable lesson: never take for granted the idea that you can just vote every 4 years and then let the government run on autopilot for their term of office.  While a coup, as its name suggests can be sudden and sweeping, at least it is immediately recognized. The insidious, sly, underhanded erosion of our democracy by Harper however, was not apparent to many Canadians until the accumulated effects could be felt at the very roots of our Canadian identity. The critical mass of individuals and groups who have suffered under the Harper regime has hopefully finally been reached and he and his cronies will be ousted at the polls.

We must never let this happen again. We must remain constantly vigilant and hold our governments to account at every opportunity. We must demand that the new Canadian Government repair the damage done by the Harper government, and that they remove the levers and loopholes that he has established or abused so that no other Prime Minister or PMO can exert the power that he did over our citizens and institutions.

Here’s to a Canada Reborn. We will be celebrating Canada Day on Tuesday for the first time in a long time.

Huffington Post – Why the Youth Vote Is Going Viral

Four years ago, I held up a sign in Parliament that said “Stop Harper.” On that day, I felt hopeless, scared and alone.

Today, I feel a sense of hope.

Let’s start with the 71 per cent spike in advance voter turnout. Add to that the 70,000 students who voted at campus polling stations and friendship centres. And studies show that if people know others are voting, they are more likely to vote too.

And that was just the beginning.

Perhaps it’s one’s over-heated imagination, but the thought that Canada could rid itself of Stephen Harper in just days seems to have made the country a happier place. Suddenly, Canadians have a spring in their step. The cloud that has kept Canada in darkness for a decade could finally lift.

Not that we delude ourselves that Liberal Leader Justin Trudeau or the NDP’s Tom Mulcair will solve all our problems, but both would eliminate the toughest issue of all — the prime minister himself.

Maclean’s – William Thorsell: ‘The editorial I’d write … if I were still writing them’

Not in recent times have Canadian voters had an opportunity to “throw the bastards out” in the classic phrase. Elected officials generally leave office before such public urges get to them.

This time however, Stephen Harper is sticking his head up above the parapets after nine years in office — nine years generally seen as the Best Before Due Date in politics, as it is for leadership in the private sector. Knowing when to leave is among the more elegant qualities of any CEO, but then Mr. Harper has never laid claim to elegance.

The Chronicle Herald – SURETTE: At last, Harper’s iron grip on power is turning to rust

Two days to go and, at last, hope that what has to happen if this country is to recapture its integrity is actually about to happen: that Stephen Harper and his scurrilous despotism are about to get the heave.

If so, it will be just in time. The world is suddenly paying attention, and what it sees is not pretty — one of the rocks of democracy and human rights in the world coming unstuck.

Astonishment is being expressed as far afield as India and Hong Kong. The U.S. magazine Esquire had a shock headline recently asking, “What the f*ck is going on in Canada?” Britain’s The Independent, under a headline proclaiming that a “liberal nation’s democracy loses its way,” had an article by its prominent international affairs correspondent, Robert Fisk, who was here a few weeks and who, reciting the litany of Harperist nasties, observed that “it is impossible not to be struck by the near-insanity of the debates which will define the country for the next four years.”

ipolitics – Michael Harris: This is not a campaign on the rocks. This is a campaign in flames.

If the sight of Rob Ford in a thong would drive the bears out of the woods, the notion of Ford arranging a political rally for Stephen Harper will drive the law-abiding and sane away from the Conservative party — never to return.

The idea of standing in front of a campaign rally in a half-filled room with Rob and Doug Ford in the front row — glaring with their tiny, mad eyes — would be enough to scare the pants off a hit man.

Canadian democracy has, we are told, been maliciously undermined at Citizenship and Immigration, and the department’s top public servant is determined to set things right, on behalf of the Canadian people.

Deputy Minister Anita Biguzs has declared herself “deeply concerned.” What has happened, she says, is an ethical erosion of the very cornerstone of the trust and democratic function of government.

Globe and Mail –  According to Stephen Harper, there are two types of Canadians

There is a principle that is truly fundamental to our country. It is that we do not simply tolerate difference, we celebrate it.

We do not impose the values of one religion on all; instead, we respect religious freedom. This protection is written into our Charter of Rights and Freedoms, the document that, more than any other, is the expression of our deepest values as a nation.

MISSISSAUGA, Ont. — The former lawyer for the Prime Minister’s Office says the Conservative government has lost the moral authority to govern, and he’s voting for change this election.

Benjamin Perrin says in a statement that based on what he’s personally seen and experienced, he felt there was no other choice but to abandon his lifelong Conservative vote.

“Last week, I voted in an advance poll for change,” Perrin said in a statement sent to The Canadian Press.

“As a lifelong conservative I never thought that would happen. But after what I’ve personally seen and experienced, there was no other choice. The current government has lost its moral authority to govern.”

Crosby’s apparent departure could not have come at a worse time for Harper, who is falling behind in the polls to Justin Trudeau’s Liberals. The prime minister is facing widespread criticism for speaking at a Toronto rally on Tuesday with scandal-plagued ex-Toronto mayor Rob Ford in attendance, who has previously admitted using illegal drugs including crack.

LYING, CHEATING AND OTHER DEBAUCHERY

To the constant “ka-ching, ka-ching” chirp of a cash register, Nicole Ropp, a married mother of three, piled up $20 bills as Harper rhymed off a list of a purported tax increases Canadians can expect from a Liberal government. For the Ropp family, it all added up to about $8,000, according to Harper.

However, Harper’s list included a number of alleged tax hikes that aren’t on the Liberal agenda and omitted a number of other measures aimed at giving middle-class families more, not less, money.

This will be the first generation of Canadians in our history to be worse off than their parents.

That blunt fact is the new reality of our country, where seven per cent of workers are officially jobless (and much more if hidden unemployment is included) and youth unemployment stands at over 13 per cent. And that reality is a direct result of the policies and actions of this Conservative government and the Mulroney government that came before

The Manitoba Cooperator is carrying a story (Grain backlog no impact on farm incomes: Ritz) quoting  Agriculture Minister Gerry Ritz ridiculing the latest independent academic study showing farmers would have been billions of dollars better off if they still had the single-desk Canadian Wheat Board.

Astoundingly, Ritz claims farmers never lost money.  Wasn’t it just last year that he was touting his “Fairy Dust for Grain Farmers Act” which he then claimed would fix the problem of, wait for it, lost farm income?

CTV News – Fahmy thanks Mulcair, Trudeau: ‘You know who I’m not voting for’

“There are no words to describe how it feels when you are wrongfully convicted and sitting in a cold cell, infested with insects (and) nurturing a broken shoulder,” he told an audience at Ryerson University. “But when you’re there, your only hope is that your prime minister would do everything in his power to get you out of there.

“Our prime minister delegated his responsibility to people who lacked the clout to really get me out of there,” he continued.

The Harper government has gutted every regulation and law we had in place to protect our freshwater supplies. Now this deregulation is locked in as corporations from Europe as well as the U.S. can soon claim to have invested in an environment without water protection rules and sue any future government that tries to undo the damage.

Despite a 2011 campaign pledge that promised to develop a national food strategy, the Conservatives are the only federal party to not respond to a campaign survey aimed at determining where Canada’s political parties stand on the policy.

BuzzFeed – Why Were A Whole Bunch Of Moving Trucks Outside The Prime Minister’s Office?

(The writing is on the wall. Fire up the Paper Shredders!)

Trucks from Boyd’s Moving & Storage and Grand & Toy could be seen parked at Langevin Block, which houses Stephen Harper’s office.

With the election only three days away, Justin Trudeau’s Liberals are leading in the polls, meaning the Conservatives’ nearly ten-year governance could be coming to an end.

Grand & Toy has an active contract with the government for shredders. The contract includes top secret document shredders that exceed “RCMP destruction standards.”

A curious election ad placed in a local newspaper by Conservative candidate Cheryl Gallant has raised the ire of postal workers, who say it contains “a series of falsehoods,” not to mention their union’s logo.

Gallant, who voted with her party to defeat an NDP motion to maintain door-to-door delivery, calls on voters in the Ontario riding of Renfrew-Nipissing-Pembroke to re-elect her as the “only” way to save Canada Post.

The ad appearing in the North Renfrew Times on Oct.14 features the “Save Canada Post” logo used by the Canadian Union of Postal Workers in their campaign against what they say are Conservative-backed cuts to postal service.