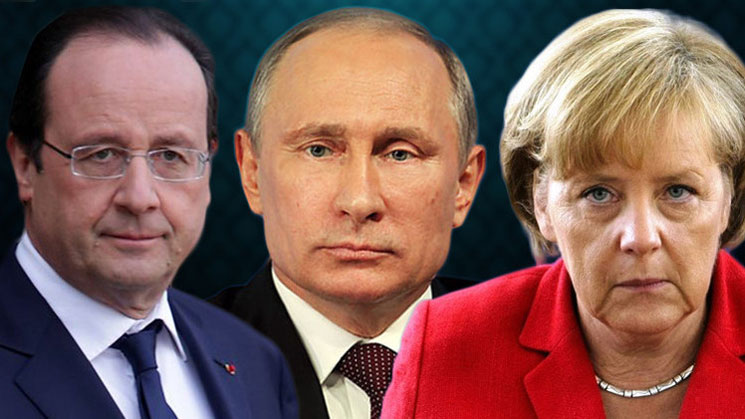 Are Germany And France Leaving The Anti-Russian Anglo-American Axis For Good?

TMR Editor’s Note:
The recent revelations about Volkswagen’s emissions scandal and Germany’s decision to support Russia’s involvement in Syria are not coincidental. Given the NSA and CIA penetration of German industry, there is virtually no corporate secret they are not aware of. This is, after all, the very purpose of the USA’s continued occupation of the Federal Republic of Germany for 70 years since the end of World War II.

The extraordinary hypocrisy in this prosecution is that this alleged scandal is being prosecuted by the so-called Environmental Protection Agency.   Because the auto emissions are said to be in violation of the Clean Air Act, the EPA has enforcement authority.  This is the very same EPA that requires Coal Fly Ash to be removed from coal-fired power plants, but then permits the chemtrailing of American skies with vast amounts of the same Coal Fly Ash that is used in the manufacturing of chemtrail aerosols.  This is the same EPA that ruled Coal Fly Ash is no longer a hazardous waste product because of its known use in chemical geoengineering by the U.S. Government.

The U.S. establishment fears a German-Russian collaboration more than anything else on Earth.  Such an alliance poses the only credible threat to the sole superpower status of the USA.  It would also deeply divide Europe and severely weaken the Anglo-American Axis which was surreptitiously formed as a countervailing force to Russian ascendancy.

Part II of this political prosecution is now drawing in BMW.  The U.S. knows that the best way to take down the German economy and keep the German people subjugated is to destroy their prized automobile industry.  Volkswagen ‘Dieselgate’ Fallout: Germany Tests Cars; Report Sends BMW Shares Down

Exactly what and who is in the Anglo-American Axis?  As follow:

The relevant news report about Germany and France breaking ranks with the USA in Syria follows.

SYRIA: GERMANY LEAVING THE RANKS OF THE US ALLIANCE AGAINST RUSSIA

In a surprise move Germany left the anti-Putin-alliance formed by the USA.  Germany is now officially welcoming Moscow’s readiness to act in Syria and is starting an initiative together with the Russians and the French to bring an end to the war.  This is to stop the constant stream of refugees. Germany has ordered thousands of soldiers into readiness. This article originally appeared at DWN, translated by Frank Jakob exclusively for SouthFront

Germany surprisingly left the alliance formed with the United States which intended to block Russia’s entry into the Syrian conflict.

Minister of Defence Ursula von der Leyen told Der Spiegel that she welcomed president Putin’s intentions of joining the fight against the extremist organization “Islamic State” (IS).  It would be a matter of mutual interests, she said.

A speaker of the Ministry of Foreign Affairs added that Germany would welcome additional efforts of Russia in the fight against IS.  Foreign Minister Frank-Walter Steinmeier even announced the starting of a joint venture between him, Russian foreign minister Lavrov and their French colleague Laurent Fabius with the aim of bringing the Syrian civil war to an end. Lavrov and Fabius are expected to arrive in Berlin this Saturday.

Russian Foreign Minister Sergey Lavrov called upon the US-Ministry of Defense to coordinate their efforts with the Russian military.  Because both sides are actively invested in Syria, it would be of paramount importance for the U.S. to reinstate the previously ceased operational cooperation with Russia, said Lavrov on Friday in Moscow.  This was intended to avoid “unintentional incidents”.  Russia’s military drills in the Mediterranean would be in accordance with international law.  Lavrov explained further that Russia would keep delivering weapons to the troops of Syrian president Bashar al-Assad to support their struggle against the extremist organization Islamic State.

Russia already began a diplomatic offensive weeks ago.  The Americans did not precisely indicate whether they would support the Russian initiative.  Under no circumstances would the U.S. give Russia credit for solving the deadlocked situation should Russia in fact be successful.  Therefore, the US government warned of a worsening in the refugee crisis should Russia intervene.

Especially the neocons are issuing warnings of any cooperation with Russia in whatever matter.  U.S. President Obama did not clearly state whether the Russian initiative was done in coordination with the White House.   Foreign Minister John Kerry went on a surprise visit to Russia in spring which has remained without results regarding the Syrian matter.  It is likely that the US government changed their mind in the face of the worsening of the refugee crisis so that they are now willing to cooperate with Russia in the Middle East.

German Frank-Walther Steinmeier has long been trying to reconcile the concerned parties behind the scenes and is therefore constantly in touch with his Russian colleague Lavrov.  It looks like he is the only one in the German government who realizes that the refugee crisis will get completely out of control if the war in the Middle East continues.  Austria and Spain signaled days ago that a Russian participation in the battle against IS was crucial.  Russia began expanding its military activities in Syria.

German Minister of Defence Ursula von der Leyen wants to expand the deployment of the Bundeswehr in Iraq.  The Bundeswehr would be ready to continue its successful work in the Kurdish regions in cooperation with the Iraqi government, she told Der Spiegel on Saturday. First steps have already been undertaken.  Germany delivered medical supplies, helmets and hazard-protections masks. Up to 100 Bundeswehr soldiers are training Kurdish Peshmerga fighters in northern Iraq.  Weapons were also delivered.

Von der Leyen also ordered thousands of German soldiers into readiness in the wake of the refugee crisis.  Whether this was done because of the refugees or hints of terror threats is still unknown.  The order was given to the troops a day before, said a speaker of the ministry on Friday in response to a report by Der Spiegel.  Up to 4000 soldiers are under constant readiness to be deployed. Hundreds of soldiers were deployed to help accommodate newly-arrived refugees last weekend.  The solders are financially compensated for their services under this deployment order.

It has been reported that Russian Foreign Minister Sergey Lavrov called into question the effectiveness of the US-led coalition against Islamic State (IS).  According to PNP magazine he stated, that concerned colleagues from within the US-led coalition turned to him. They informed him that the US military did not give clearances to their fighter pilots even though they clearly located and identified Islamic State positions.

*The Millennium Report has further edited the translation originally posted at Stormfront.org.