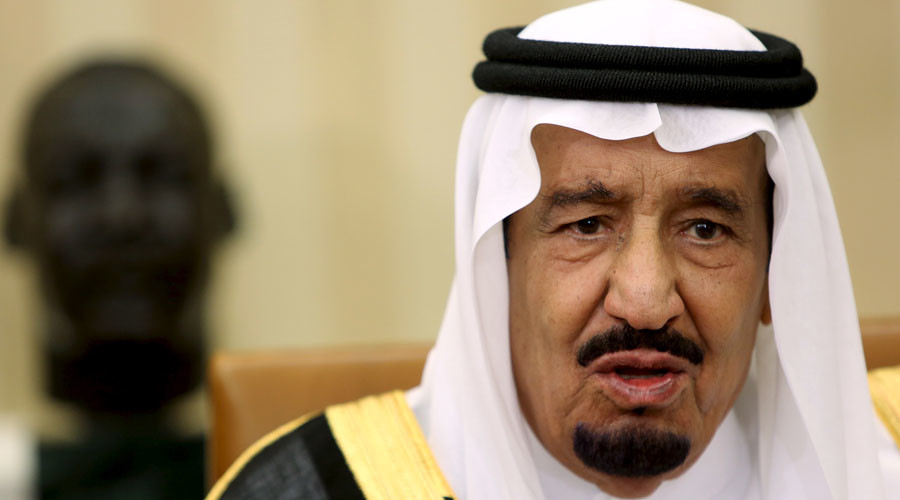 Saudi King Salman bin Abdulaziz delivers his remarks to U.S. President Barack Obama (not pictured) in the Oval Office of the White House in Washington September 4, 2015. This is the king’s first visit to the United States since ascending to the throne in January.  (REUTERS/Gary Cameron)

TMR Editor’s Note:
With the ascension to the throne of King Salman,  Saudi Arabia has adopted a disastrous foreign policy throughout the Middle East.  Not only has the King taken sides with Israel over some of his Muslim neighbors, his monarchy has initiated highly destructive and unprovoked military aggression against Yemen.  Having systematically turned that small defenseless country into a poster child for disaster capitalism begs the following question.

Did the CIA pull off another palace coup in January of 2015?

When dramatic changes in OPEC policy, which have been dictated by Saudi Arabia under the new king, are also considered, clearly the Western powers are exerting considerably more influence in Riyadh. Not only did the precipitous drop in the oil price significantly rearrange the global geopolitical chessboard, the Saudi-engineered price plummet served to plunge Russia into economic and financial turmoil.

Cui bono?  The USA is by far the greatest beneficiary of any moves which undermine Russia’s political stability and economic security.  Even though American shale oil production suffered, any initiatives which ultimately subvert Russian sovereignty always serve Washington’s agenda.  The following essay well explains why this is necessarily the case, as well as the #1 American priority.

In light of several developments within Saudi Arabia since King Salman took the throne, it is clear that he feels threatened.  Which explains why so many ‘convicts’ have been beheaded during his very short reign. Saudi Arabia carries out 100th execution this year and is on course to set beheadings record

Will Saudi Arabia become the next victim of the Arab Spring?  Questions like this are only asked publicly when the USA via the CIA wants to send a strong message to Saudi leadership.  American foreign policy in the Mideast hinges on the allegiance of Saudi Arabia. Without strict Saudi control of OPEC, world energy agreements/relationships would rearrange themselves in a New York minute.  Such a thing cannot be allowed to happen or else the entire global control matrix would unravel.

Enter Saudi mobile networks, Twitter and Facebook.  Just as the CIA tweets live coverage of their live coup d’états, the princes in the Saudi palace have taken a page right from the “CIA Coup Handbook”.   Likewise, just as the CIA makes strategic posts on their coup-dedicated Facebook walls during fabricated protests, fake revolutions and fraudulent civil wars, these restless princes (and princesses) are doing the same … anonymously, of course.

Welcome to a whole new phase of the Arab Spring — a Saudi Arabian counter-coup.   Little did the CIA & Company ever realize that their own MO could be used so effectively against them.  It looks like their covert use of the Saudi military to bomb Yemen back into the Stone Age has been the straw that broke the camel’s back.

Truly, you know your time is very short when even France kicks you out!
Saudi Arabian king leaves France after holiday controversy

Game of Thrones a-la-Gulf: Saudi royal said to be calling to family members to replace king

A letter has been allegedly circulating among members of the Saudi royal family, with warnings that the House of Saud may be losing its grip on power. The letter containing a number of political accusations is said to be penned by an unnamed royal himself.

“We [have] got closer and closer to the fall of the state and the loss of power,” online news portal Middle East Eye cited the letter on Tuesday. Signed by “a descendant of the King Abdulaziz of the House of Saud,” the letter is said to have been written by the late king’s grandson, who confirmed to MEE he was the author, but asked not to be named “for fear of negative repercussions.”

“We appeal to all the sons of King Abdulaziz… to summon an emergency meeting with all the family to discuss the situation and do everything that is need[ed] to save the country,” the four-page document reportedly says, with a senior Saudi prince calling for the current “incapable” Saudi King Salman and his son Deputy Crown Prince Mohammed bin Salman to be replaced.

The 79-year-old Saudi king in the spotlight of the backstairs intrigue has ruled the country since the death of his brother Abdullah in January. Apart from him and his son, the letter also mentions his nephew Mohammad bin Al-Nayef, calling the latter “extravagant and vain.” Both younger royals hold high positions in the Saudi government, and are responsible for decisions which saw oil prices fall steeply, as well as the war in Yemen.

The letter claims the recent military decisions, including the campaigns in Yemen, Syria and Iraq are “totally miscalculated,” having “weakened the trust of our people and [incited] other peoples against us.”

The document, which is said to be circulating among the princes by secure means of mobile communication, also reportedly touches upon financial challenges faced by the Gulf kingdom. While oil revenues make the overwhelming part of the state income, it has now found itself in a situation when oil prices plummeted down more than by half over the year.

Yet, the Saudi royal family continues to wow the world with its luxurious lifestyle, with King Salman closing a whole French Riviera beach for exclusive use or booking out an entire luxury hotel while in Washington. The net worth of the royal family is estimated at around 1.4 trillion dollars – a  but the alleged author of the letter suggests some certain royal family members have been “devastating for the state.” The author went as far as to call the Deputy Crown Prince Mohammed bin Salman a “rotten thief.”

“We will not be able to stop the draining of money, the political adolescence, and the military risks unless we change the methods of decision making, even if that implied changing the king himself,” MEE cited the letter as saying.

The modern state of Saudi Arabia was established in 1932 by King Abdulaziz Ibn Saud. Since his death in 1953, the country has been ruled by his sons, including the current King Salman. There are over a dozen of Ibn Saud’s sons still alive, but Salman is said to possibly be handing the reigns to his son – a grandson of Ibn Saud, rather than to one of the founder’s living sons. Such possible turn is not welcomed by other members of the royal family, causing an internal rift in the House of Saud.

Whether the ruler in Saudi Arabia is changed “depend largely on their external benefactor – the United States, and whether the United States wants King Salman and his particular choices of defense minister etc. to continue to rule,” political science professor Colin Cavell told RT, adding that there is still “a real problem internally, there’s great concern among the Saudi royals over the amount of money.”

“What we have is a lot of avariciousness, a lot of greed and this undercuts the entire House of Saud,” Cavell said, commenting on the reported letter.

However, some have suggested that the document could be a hoax. Doubting the authenticity of the letter, a prominent Saudi journalist told MEE – which originally reported on the letter, that he knows “a prince who is always exchanging with me documents and articles.” “This letter hasn’t circulated,” General Manager of Al Arab Television Jamal Khashoggi said.