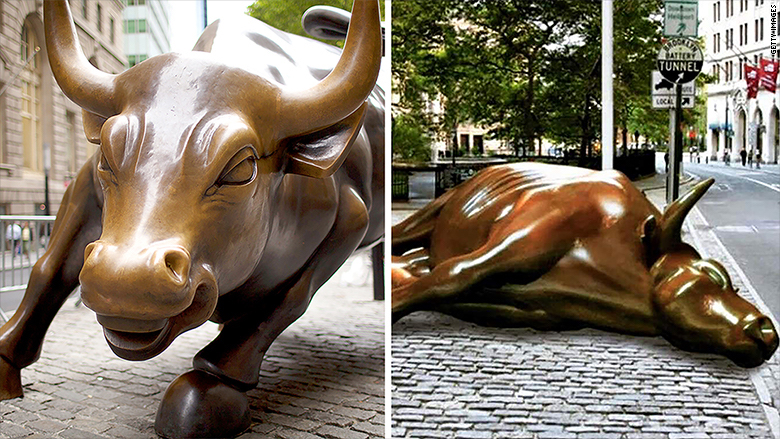 When stock markets are free-falling 10+% in a matter of days, it’s natural to seek some answers to the question “why now?”

Some are saying it was all the result of high-frequency trading (HFT), while others point to China’s modest devaluation of its currency the renminbi (a.k.a. yuan) as the trigger.

Trying to finger the proximate cause of the mini-crash is an interesting parlor game, but does it really help us identify the trends that will shape markets going forward?

We might do better to look for trends that will eventually drag markets up or down, regardless of HFT, currency revaluations, etc.

At the risk of stating the obvious, let’s list the major trends that are already visible.

1. The China Story is Over

And I don’t mean the high growth forever fantasy tale, I mean the entire China narrative is over:

I could go on, but you get the point: the entire Story is over.  (I explained why in a previous essay, Is China’s “Black Box” Economy About to Come Apart? )

This is entirely predictable. Every fast-growing economy starting with near-zero debt and huge untapped reserves of cheap labor experiences an explosive rise as the low-hanging fruit is plucked and the same abrupt stall and stagnation when the low-hanging fruit has all been harvested, leaving only the unavoidable results of debt-fueled speculation: an enormous overhang of bad debt, malinvestment (a.k.a. bridges to nowhere and ghost cities) and policies that seemed brilliant in the good old days that are now yielding negative returns.

Emerging currencies and markets have soared on the back of the China Story, as China’s insatiable demand for oil, iron ore, copper, soy beans, etc. drove global demand to unparalleled heights.

This demand pushed prices higher, which then pushed production (supply) higher, as the low cost of capital globally enabled marginal resources to be put into production with borrowed money.

Now that China’s demand has fallen off—by some accounts, China’s GDP is actually in negative territory, despite official claims that it’s still growing at 7% annually—commodity prices have crashed, taking the emerging markets’ stock and currency markets down. (Source)

Here is a chart of Doctor Copper, a bellwether for industrial and construction demand: Here is Brazil’s stock market, which has declined 54% in the past 12 months: These are catastrophic declines, and with China’s growth story over, there is absolutely nothing on the global horizon to push demand back up.

The simple truth is that expanding debt has fueled global growth. Though people identify China as the driver of global demand for commodities, China’s growth is debt-driven. As noted above, China quadrupled its officially tracked debt from $7 trillion in 2007 to $28 trillion as of mid-2014—an astonishing 282 percent of gross domestic product (GDP).  If we add the estimated $5 trillion of shadow-banking system debt and another year’s expansion of borrowing, China’s total debt of $35+ trillion is in excess of 300% of GDP—levels associated with doomed to default states such as Greece and Spain.

Borrowed money that poured into ramping up production in emerging nations is now stranded as prices have plummeted, rendering marginal production intensely unprofitable.

In sum: greatly expanding debt boosted growth virtually everywhere after the Global Financial Meltdown of 2008-2009. That fix is a one-off: not even China can quadruple its $35+ trillion debt to $140 trillion to reignite growth.

Here is a sobering chart of global debt growth: When the global economy rolled over into recession in 2008, governments borrowed money by selling sovereign bonds to fund increased state spending.  In the U.S., federal borrowing soared to over $1 trillion per year as the government sought to replace declining private spending with public spending.

Governments around the world have continued to run large deficits, piling up immense debts since 2008.  The global move to near-zero yields has enabled governments to support these monumental debt loads, but even at near-zero yields, the interest payments are non-trivial. These enormous sovereign debts place some limits on how much governments can borrow in the next global recession—a slowdown many think has already started.

Here is a chart of U.S. sovereign debt, which has almost doubled since 2008: As noted on the chart: what structural inadequacies or problems did governments fix by borrowing gargantuan sums to fund state spending?  The basic answer is: none. All the same structural problems facing governments in 2008 remain untouched in 2015. These include: over-indebtedness, bad debts that haven’t been written down, insolvent banks, soaring social spending as the worker-retiree ratio slips below 2-to-1, externalized environmental damage that has yet to be remediated, and so on.

In the wake of the Global Financial Meltdown of 2008-2009, central banks launched monetary stimulus programs aimed at pumping money into the economy via bank lending. The stated goals of these stimulus programs were 1) boost employment (i.e. lower unemployment) and 2) generate enough inflation to stave off deflation, which is generally viewed as the cause of financial depressions.

While it can be argued that these unprecedented monetary stimulus programs achieved modest successes in terms of lowering unemployment and pushing inflation above the zero line, they also widened wealth and income inequality.

Even as these programs made modest dents in unemployment and deflation, they pushed asset valuations to the moon—assets largely owned by the few at the top of the wealth pyramid. Here is a chart of selected developed economies’ income/wealth skew: In summary, the fixes for the 2008-09 recession are no longer available in the same scale or effectiveness.  Expanding debt to push up demand and investment, rising state deficit spending, massive monetary stimulus programs—all of these now face limitations. This means the central banks and states have very limited tools to reignite growth as global recession trims borrowing, investment, hiring, sales and profits.

In Part 2: What Happens Next Will Be Determined By One Thing: Capital Flows, we’ll look at the one dynamic that ultimately establishes assets prices:capital flows.

I personally don’t think the world has experienced a period in which capital preservation has become more important than capital appreciation since the last few months of 2008 and the first few months of 2009.  Other than these five months, the focus has been on speculating to obtain the highest possible yield/appreciation.

This suggests to me that the next period of risk-off capital preservation will last a lot longer than five months, and perhaps deepen as time rewards those who adopted risk-off strategies early on.

THE MILLENNIUM REPORT: Reporting the Most Important News in the World Today.