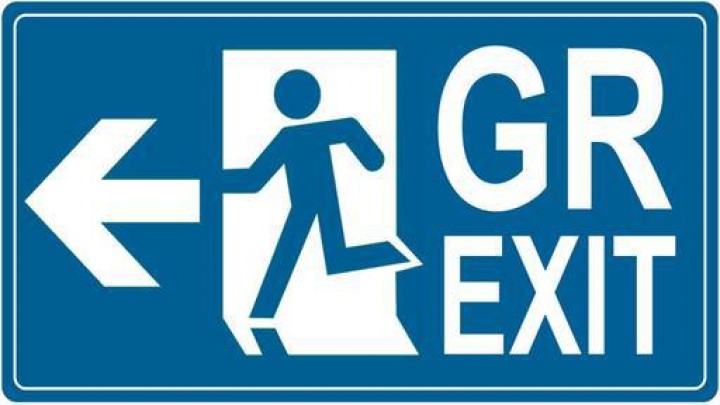 In Athens on Friday, the ATM lines began to form in earnest.

Although estimates vary, Kathimerini, citing Greek banking officials, puts Friday’s deposit outflow at €1.7 billion. If true, that would mark a serious step up from the estimated €1.2 billion that left the banking system on Thursday and serves to underscore just how critical the ECB’s emergency decision to lift the ELA cap by €1.8 billion truly was. “Banks expressed relief following Frankfurt’s reaction, acknowledging that Friday could have ended very differently without a new cash injection,” the Greek daily said, adding that the ECB’s expectation of “a positive outcome in Monday’s meeting”, suggests ELA could be frozen if the stalemate remains after leaders convene the ad hoc summit. Bloomberg has more on the summit:

Dorothea Lambros stood outside an HSBC branch in central Athens on Friday afternoon, an envelope stuffed with cash in one hand and a 38,000 euro ($43,000) cashier’s check in the other.

She was a few minutes too late to make her deposit at the London-based bank. She was too scared to take her life-savings back to her Greek bank. She worried it wouldn’t survive the weekend.

“I don’t know what happens on Monday,” said Lambros, a 58-year-old government employee.

Nobody does. Every shifting deadline, every last-gasp effort has built up to this: a nation that went to sleep on Friday not knowing what Monday will bring. A deal, or more brinkmanship. Shuttered banks and empty cash machines, or a few more days of euros in their pockets and drachmas in their past – – and maybe their future.

For Greeks, the fear is that Monday will be deja vu, a return to a past not that distant. Before the euro replaced the drachma in 2002, the Greeks were already a European bête noire, their currency mostly trapped inside their nation, where cash was king and checks a novelty.

Everything comes together on Monday. Greek Prime Minister Alexis Tsipras, back from a visit with Vladimir Putin in St. Petersburg, will spend his weekend coming up with a proposal to take to a Monday showdown with euro-area leaders.

A deal there is key. The bailout agreement that’s kept Greece from defaulting expires June 30. That’s the day Greece owes about 1.5 billion euros to the International Monetary Fund.

Without at least an understanding among the political chiefs, Greek banks will reach the limits of their available collateral for more ECB aid.

Indeed, JP Morgan suggests that the central bank may have already shown some leniency in terms of how it treats Greek collateral. Further, analyst Nikolaos Panigirtzoglou and team estimate, based on offshore money market flows, that some €6 billion left Greek banks last week.

If no agreement is struck on Monday evening that paves the way for further ELA hikes, the ECB may do exactly what we warned on Monday. That is, resort to the “nuclear option” which would, as JPM puts it, make capital controls are “almost inevitable.” Here’s more:

The escalation of the Greek crisis over the past week has caused an acceleration of Greek bank deposit outflows which in turn increased the likelihood of Greece introducing capital controls as soon as next week if Monday’s Eurozone leaders’ summit on Greece brings no deal. Indeed, our proxy of Greek bank deposit outflows, i.e. the purchases of offshore money market funds by Greek citizens is pointing to a material acceleration this week vs. the previous week.

As mentioned above this acceleration in the pace of deposit outflows is raising the chance that the Greek government will be forced to impose restrictions on the withdrawal of deposits if no deal is reached at the Eurozone summit on Monday. This is because Greek banks’ borrowing from the ECB has moved above the €121bn maximum we had previously estimated based on available collateral (€38bn using EFSF as collateral, €8bn using government securities as collateral & €75bn using credit claims as collateral). In particular, by assuming that Greek banks operate at c €1-2bn below the ELA limit as a buffer, we estimate that their current borrowing is €125bn. This is based on the ECB raising its ELA limit to €86bn on Friday this week from €84bn on Wednesday.

Here is the punchline: when the ECB hiked Greek ELA by €1.8 bilion in its Friday emergency meeting (an amount that was promptly soaked up by the €1,7 billion in Greek bank runs on Friday), it may have done so in breach of the Greek “borrowing base” because, according to JPM, with total ECB borrowings of €125, this means that Greece is now €4 billion above its maximum eligible collateral. The ECB surely knows this, and has breached its own borrowing base calculation for one of two reasons: because it knows the breach will be promptly limited or reversed on Monday, or there will be a deal. In other words, Greece is now officially living on borrowed time:

All of this is now moot: as we explained previously, for the Greek banks it is now game over (really, the culmination of a 5 year process whose outcome was clear to all involved) and the only question is what brings the Greek financial system down: whether it is a liquidity implosion as a result of a bank run which one fails to see how even a “last minute deal”, or capital controls for that matter, can halt, or a slow burning solvency hit as Greek non-performing loans are now greater than those of Cyrpus were at the time when the Cypriot capital controls were imposed. As Bloomberg calculated last week, just the NPL losses are big enough now to wipe out the Big 4 Greek banks tangible capital.

JPM, for now, focuses on the liquidity aspect:

The deposit outflows from Greek banks show how dramatic the reversal of Greece’s liquidity position has been over the past six months. The €8bn that left the Greek banking system month-to-date has brought the cumulative deposit withdrawal to €44bn since last December. This €44bn has more than reversed the €14bn that had entered the Greek banking system between June 2012 and November 2014 (Figure 2). The €117bn of deposits lost cumulatively since the end of 2009 has brought the bank deposit to GDP ratio for Greece to 66%. This is well below the Eurozone average of 94%.

And with more than three-quarters of the nearly €500 billion in outstanding foreign claims on Greece concentrated among foreign official institutions, any “contagion” will come will come not from the financial impact of Grexit, but from the psychological impact as the ECB’s countless lies of “political capital” and “irreversible union” crash like the European house of cards.

Would a Greek exit make the Eurozone look “healthier” as problem countries that do not obey rules are ousted? Or would markets rather question the ability of the Eurozone to cope with a bigger problem/country in the future if they cannot deal with a small problem/country such as Greece? Would a Greek exit make the Eurozone more stable by fostering more fiscal integration and debt mutualization over time? Or would the large losses from a Greek exit rather make creditor nations even more reluctant to proceed with much needed debt mutualization and fiscal transfers in the future?Would a Greece exit, and the punishment of Syriza as an unconventional political party, reduce the popularity of euroskeptic and unconventional political forces in Europe, as Greece becomes an example for other populations to avoid? Or would a Greek exit and the punishment of a country that refused to succumb to neverending austerity rather demonstrate the lack of flexibility, solidarity and cooperation giving more ground to euroskeptic parties across Europe?

Again we see that the entire world is now wise to the game the troika is playing. This isn’t about Greece, it’s about Spain and Italy or any other “bigger” problem countries whose voters elect “euroskeptic” politicians. As a reminder, if and when the Greek problem shifts to other PIIG nations, then it will be truly a time to panic:

So much as US-Russian relations are, to quote Kremlin spokesman Dmitry Peskov, “sacrificed on the altar of election campaigns”, so too are relations between Greece and its European “partners” sacrificed for political aims. In the end, the entire Greek tragicomedy comes back to the simple fact that a currency union with no fiscal union is no union at all and will likely be nearly impossible to sustain. We’ll leave you with the following quote from Alexandre Lamfalussy, BIS veteran, first President of the EMI (the ECB before the ECB existed), and the “Father of the Euro”:

“It would seem to me very strange if we did not insist on the need to make appropriate arrangements that would allow for the the gradual emergence and the full operation once the EMU is completed of a community-wide macroeconomic fiscal policy which would be the natural compliment to the common monetary policy of the community.”