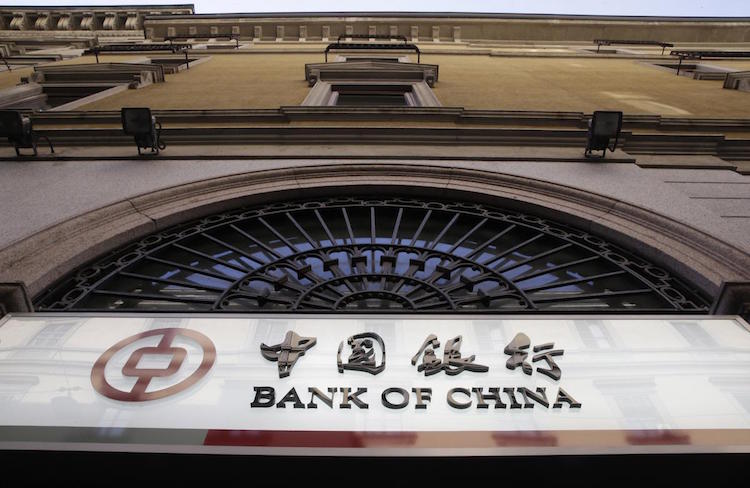 HOLD FOR STORY CHINA ITALY MONEY LAUNDERING BY ERIKA KINETZ – In this photo taken Wednesday, April 15, 2015,the logo for the Bank of China is displayed at its branch in downtown Milan, Italy. Italian prosecutors say more than 4.5 billion euros ($4.9 billion) were smuggled to China in less than four years — nearly half of it with the help of the state-run Bank of China. Italy is now investigating four Bank of China employees and its Milan branch for allegedly laundering 2.2 billion euros, the proceeds of counterfeiting, labor exploitation and tax evasion, according to court documents obtained by the Associated Press.(AP Photo/Antonio Calanni)

SHANGHAI — Italian prosecutors are seeking to indict 297 people and the Bank of China in connection with a massive money-laundering investigation reported by The Associated Press earlier this month.

The suspects, mostly Chinese migrants living in Italy, include four senior managers of the Chinese state bank’s branch in Milan. According to prosecutors, at least some of the suspects used Mafia-like techniques, including intimidation, the ANSA news agency reported Saturday.

The case highlights the large underground Chinese economy in Europe and the failure of judicial and legal cooperation to keep pace with the economic ties, both legal and illegal, that bind China with the West.

Prosecutors said more than 4.5 billion euros ($5.1 billion) in proceeds from counterfeiting, prostitution, labor exploitation and tax evasion was sent to China in less than four years using a money-transfer service partly owned by Chinese migrants. Nearly half that money was funneled through the Bank of China, which in turn earned over 758,000 euros in commissions, according to Italian investigative documents. Prosecutors said the money had been fractioned into small sums to avoid detection and that the bank’s management and audit staff failed to report suspicious transactions, helping conceal the source and destination of the funds.

Beijing, which is seeking Western help in hunting its own economic fugitives, did not cooperate with the investigation, Italian officials said. Once the money left Italy, it effectively vanished. Italian police were unable to continue their investigation in China, but the AP was able to track some of the missing money to a large government-controlled import-export company that has been accused of repeatedly shipping counterfeit merchandise, some of it to the United States.

In response to AP’s article, China’s state-run Global Times newspaper published a rebuttal, in Chinese, defending the Bank of China and criticizing the AP’s report as “strange.” The article, which was picked up by other Chinese media, quoted a law expert saying that the Bank of China has “no obligation to cooperate with Italian police.”

The Bank of China has denied wrongdoing, and lawyers for the money transfer network’s owners have said their clients are not guilty.

Judicial cooperation has become crucial for Beijing, which is pressuring Western governments to help hunt corrupt officials who have fled overseas. President Xi Jinping’s far-reaching anti-graft drive is a top priority for the ruling Communist Party as it seeks to shore up its legitimacy. Beijing has already punished over 100,000 officials for corruption.

Italy and China signed a memorandum of judicial cooperation in September. So far, the most visible signs of collaboration have been in Beijing’s favor.

In February, Italy extradited a Chinese woman accused of stealing more than 1.4 million yuan ($225,515) during her tenure at a securities company in Heibei province. It was the first time anyone had been extradited from Europe for an economic crime, according to China’s Ministry of Public Security.

Under Italy’s justice system, a judge will consider the prosecutor’s request and either order a trial or throw out the case. The judge’s evaluation could take months before a decision is made.

In Italy, institutions as well as individuals can be ordered to stand trial.

The case involves operations carried out from 2007 to 2010, ANSA said.

Prosecutors’ offices were closed over the weekend.