Earlier today, as the exchange between Greece and its creditors got increasingly belligerent, Estonian Prime Minister Taavi Roivas told public broadcaster Eesti Rahvusringhaaling in interview that a possible Greek decision to leave euro area wouldn’t soften stance of other EU countries and that Greece’s debt would still remain outstanding and creditors would expect this money back.”

“If Greece leaves, the value of their new national currency would decline very fast, so their solvency would still worsen further. They will either have to cut spending or improve their tax revenues. There are no other options.”

So did this latest antagonism change the Greek mind? According to a flash headline by the WSJ released moments ago, not all. In fact, Greece just made it official that it would default to the IMF in just over 24 hours. 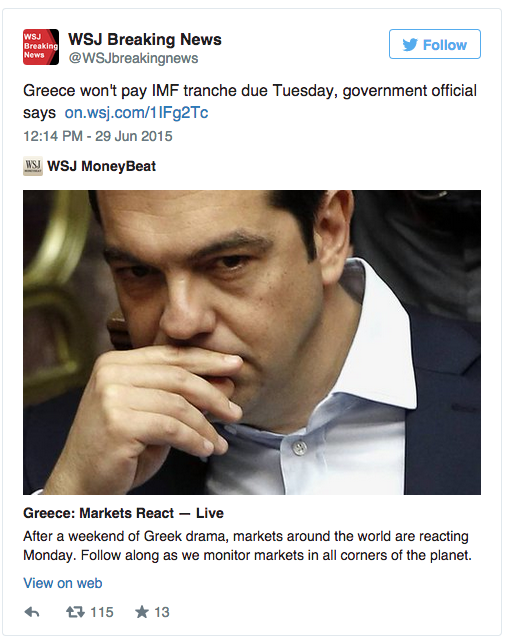 Earlier this month, Greece had notified the IMF it plans to bundle its loan repayments falling due this month into one payment of around 1.6 billion euros ($1.7 billion), which is due Tuesday.

The IMF has said that Greece will immediately be in arrears if it fails to make the debt repayment.

So, as per game theory, the Greek plan – at least until the social mood turns very ugly – remains just one:

The problem is what happens then…