The decision to extend the sanctions against Russia was announced by the EU Council’s press officer for foreign affairs, Susanne Kiefer.

The sanctions are being maintained until January 31, 2016 to ensure the Minsk agreement is implemented, she wrote in her Twitter account.

Dialogue with Russia, especially on Libya and Syria, is “crucially important” for the EU, Gentiloni added.

Russian Prime Minister Dmitry Medvedev has ordered his chief of staff to ask President Putin for an extension of Russian counter-sanctions following the EU decision. 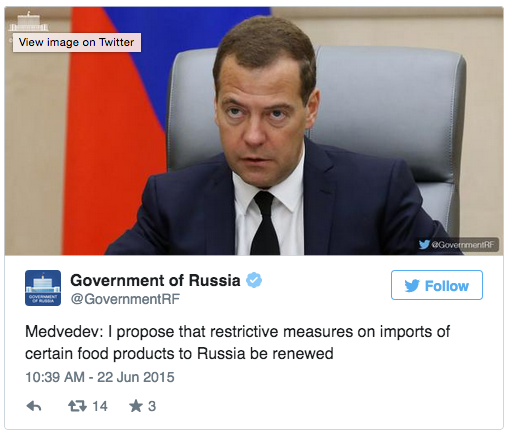 It wasn’t Russia that began the restrictive measures in the first place, but it would answer reciprocally, Russian presidential spokesman Dmitry Peskov told reporters on Monday.

The policy of sanctions harms not only business activity in Russia, but European taxpayers as well, he added.

Agreement on the extension of sanctions was reached at a meeting of the EU Permanent Representatives Committee on June 17. In March, the EU Summit adopted a political declaration of intent to extend economic sanctions against Russia for another six months. In the document, the lifting of sanctions was linked to the full implementation of the conditions of the Minsk agreement, for the period up until the end of the year.

The European Union will review the sanctions regime against Russia in six or seven months, Italian Foreign Minister Paolo Gentiloni told reporters in Luxembourg.The premier has also ordered the preparation of a decree listing all categories of products and types of transactions covered by the restrictive measures.

EU sanctions against Russia include restrictions on lending to major Russian state-owned banks, as well as defense and oil companies. In addition, Brussels imposed restrictions on the supply of weapons and military equipment to Russia as well as military technology, dual-use technologies, high-tech equipment and technologies for oil production. No sanctions were imposed against Russia’s gas industry.

The EU imposed sanctions against Russia on August 1, 2014, and tightened them in September the same year. In October, a separate decision by the EU Council loosened restrictions against European subsidiaries of Russian state banks.

As a countermeasure, Russia introduced a food embargo against countries that supported the sanctions, and has pursued a policy of import substitution since then.

The impact of the countersanctions on the EU economy is higher than initially forecast by Brussels, according to a recent study by the Austrian Institute of Economic Research (WIFO).

As a result of the sanctions, up to 2.5 million Europeans are facing job losses, and the EU could see a €100 billion loss in economic development.

Switzerland, which is not part of the EU but followed Brussels’ lead on sanctions, would see losses of 45,000 jobs, including 5,000 in the tourism sector, the study said.