Ash from the Chilean volcano Calbuco, which erupted without warning this week, reached as far as southern Brazil on Saturday and prompted some airlines to cancel flights to the capitals of Chile, Argentina and Uruguay.

Calbuco, considered one of the most dangerous along Chile’s chain of around 2,000 volcanoes, erupted twice in 24 hours on Wednesday and Thursday, sending up a spectacular 17-km-high (11 miles) cloud and coating nearby towns in a thick layer of gray ash.

Authorities have set up a 20-km (12 mile) cordon around Calbuco, in the scenic Los Lagos region, around 1,000 km (620 miles) south of the capital Santiago, evacuating more than 6,500 locals.

“The dangerous nature of volcanic activity like this plus the volcano’s current instability that could lead to more intense activity in the short term indicates we should maintain the perimeter,” Chile’s national office of emergency said in its latest report.

Authorities allowed people who had been evacuated to briefly enter the perimeter on Saturday to check their houses, animals and medication.

Some houses and schools located close to the volcano have collapsed under the weight of the ash.

The ash also presents a threat to air traffic, as particles in the atmosphere can cause problems for planes.

With winds blowing the ash cloud northeast into Argentina, Argentine air traffic has been the worst affected so far. But a spokesman for Argentina’s National Civil Aeronautic Administration said the situation was “much better than yesterday.”

“The airports (of Buenos Aires) are operating normally. The first ash cloud has already passed by and the second is on the move. American Airlines is not operating on their own accord, nor are Delta Air Lines, or United. They are evaluating the situation on a day-to-day basis.” 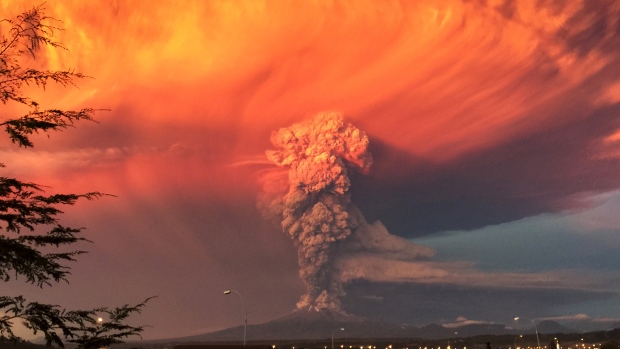 The head of Chile’s mining and geological service said on Friday the volcanic process could last for weeks. (Reporting by Felipe Iturrieta in Santiago, Additional reporting by Malena Castaldi in Montevideo and Brian Winnter in Sao Paolo, Writing by Sarah Marsh; Editing by Janet Lawrence)