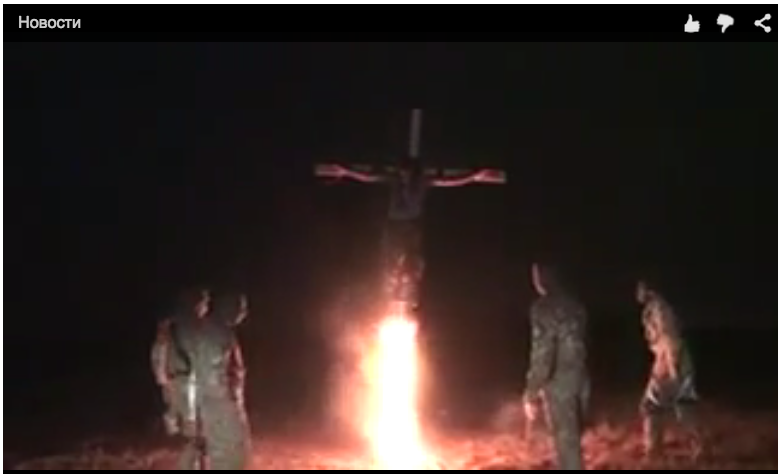 TMR Editor’s Note
The U. S. Federal Government has consistently backed the fascist criminal regime which it installed in Kiev after the Maidan Protest engineered by the CIA. The same neo-Nazi junta has carried out one war crime after another against its own people throughout the Russian-speaking eastern Ukraine.

Were the American people to know the gravity of those war crimes being committed in their name, and with their tax dollars, surely US support for these criminal warmongers would end.  Hence, we have chosen to post this shocking video so that the body politic will become aware of these egregious acts.

Shocking video shows Ukrainian neo-nazi militia fighters carrying out an ISIS-style execution during which they nail a separatist rebel to a cross and then burn him alive.

The authenticity of the footage is yet to be confirmed, although it seems chillingly real on first viewing.

The brutal murder was reportedly carried out by members of the Azov Battalion, which was converted into a regiment last year, making it a de facto part of the Ukrainian Army. The paramilitary group forms “the backbone of the forces fighting against the local self-defense militia advocating independence from Ukraine.”

Ukrainian nationalist volunteers have repeatedly been accused of carrying out “ISIS-style war crimes”during the conflict, including beheadings.

The clip shows a hooded man kneeling in a field as five Ukrainian militants stand around him while one reads a statement. The militants then grab the victim, who is gagged, and place him down on a wooden cross.

The man’s arms are taped to the cross and his hands are then nailed to the structure as he groans and writhes in agony.

The victim is then lifted up on the cross, which is planted in the ground before the militants light a fire at the bottom. The video cuts off at the point that the fire reaches the man’s feet and he begins to scream.

The execution, which was reportedly carried out near the village of Shirokino, came with a message from Azov fighters to pro-Russian rebels; “All the separatists, traitors of Ukraine and militia fighters will be treated the same”.

Pro-separatist hackers Cyberberkut, to whom the video was sent, responded by vowing that no Ukrainian Army or militia fighters would be taken alive in future.

Azov militants identify as neo-nazis and routinely adorn their helmets and uniforms with Nazi SS logos and swastikas, as seen in the image below taken from German television.

Despite their implication in war crimes and fascist ideology, on Monday, U.S. troops from the 173rd Airborne Brigade arrived at the Yavoriv training ground in Lviv to work with Ukrainian national guard battalions.

As the Telegraph reported last year, Kiev has thrown openly fascist battalions like Azov onto the front line in their battle against pro-Russian separatist rebels.

Arming and funding bloodthirsty militants who carry out ISIS-style executions would be a repeat of Washington’s disastrous policy of doing the very same thing in Libya and Syria, a strategy that directly led to the growth of ISIS throughout the region. However, a Pew poll conducted in February found that a majority of Americans support doing precisely that.