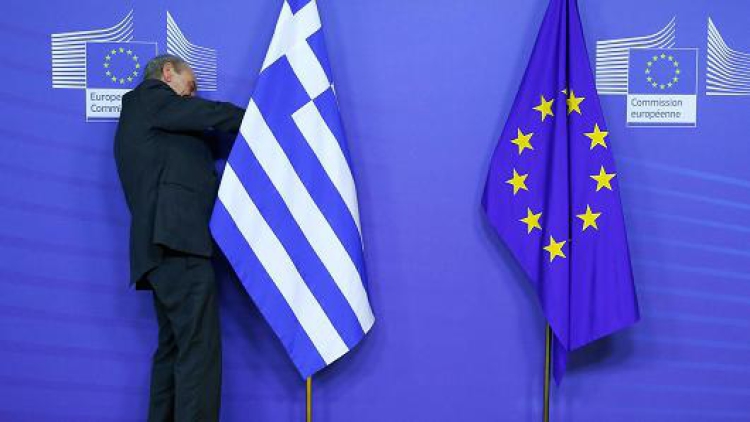 In what seems like a coincidental retaliation for Greece’s pivot to Russia (and following Greece’s initiation of capital controls), the supposedly independent European Central Bank has decided suddenly that – after dishing out €74 billion of emergency liquidity to the Greek National Bank to fund its banks – as The NY Times reports, the value of the collateral that Greek banks post at their own central bank to secure these loans be reduced by as much as 50%, and the haircut scould increase if negotiations with Europe remain at an impasse. As we detailed earlier, this is about as worst-case-scenario for Greece as is ‘diplomatically’ possible currently, and highlights an increasingly hard line by The ECB toward The Greeks as the move will leave banks hard-pressed to survive.

As we laid out earlier, according to Bloomberg, the ECB staff proposal lays out three options to reduce central-bank risk: “the scenarios envisage returning haircuts to the level before late last year, when the ECB eased its collateral requirements for Greece; to set them at 75 percent; or to set them at 90 percent. The latter two options could be applied if Greece is in an “orderly default” under a formal ECB program or a “disorderly default,” CNBC said, without further elaborating on those terms.”

Any reduction in ELA availability would be devastating to Greece, where depositors continue to pull cash from banks accounts to the tune of several hundred million euro every week, and the central bank “seeks to match the outflow with ELA. The Bank of Greece keeps a buffer of around 3 billion euros of ELA allowance in reserve, to give it time to react to a possible bank run, one of the officials said.”

Any reduction in this buffer would lead to a self-fulfilling bank run prophecy and accelerate the deposit flight to the point where the local banks are forced to halt operations, and Greece is forced to replace the “soft” capital controls already rolled out with “hard” ones.

To restrict or veto ELA funding, which is provided at the Greek central bank’s own risk with consent from Frankfurt, a two-thirds majority of the Governing Council is necessary. A growing minority is opposed to continuing to provide the assistance indefinitely, one of the people said.

And so, as The NY Times reports this evening, despite no ECB governing council meeting until May 6th and the above plans, The ECB went further;

The European Central Bank is now demanding that the value of the collateral that Greek banks post at their own central bank to secure these loans be reduced by as much as 50 percent, according to people who have been briefed on these discussions but who were not authorized to discuss them publicly.

And, these people say, if the Greek government and Europe remain at an impasse on an agreement about austerity measures, these so-called haircuts could increase further.

With the value of the collateral being reduced so significantly, banks will be hard pressed to obtain the money they need to survive.

For more than three months, Greece’s largest banks have been forced to borrow short-term, higher-interest money from their central bank — a process called emergency liquidity assistance — because the E.C.B. deemed it too risky to extend credit to the banks itself.

The banks, in turn, have to provide adequate collateral to obtain these loans, which now stand at 74 billion euros, $79.7 billion, or more than half the amount of Greek domestic deposits.

But with deposits fleeing the banking system and with nonperforming loans – which had stabilized before the radical Syriza government came to power early this year — increasing again, it has been difficult for Greek banks to come up with acceptable assets to underpin borrowing.

Controversially, Greek banks have even begun to issue bonds to themselves and, after securing a government guarantee, have used the securities to secure short-term financing — a practice that was excoriated by Yanis Varoufakis before he became the Greek finance minister.

Which means one thing only…

These haircuts exceed those imposed on Greek banks in June 2012, when emergency loans had soared to €125 billion on worries that Greece would be forced to leave the eurozone. As The NY Times explains, The ECB won’t be fooled again…

Under E.C.B. rules, the central bank of Greece assumes full responsibility for the credit risk when it issues these emergency loans.

But the E.C.B. carefully monitors them, setting limits and scrutinizing the collateral.

During the Cyprus crisis, Jens Weidmann, the powerful German member of the E.C.B.’s governing council, bluntly criticized the head of the Cyprus central bank for inflating the value of collateral to allow desperate Cypriot banks to borrow more money.

By requiring such large discounts, the E.C.B. is making sure that the same thing does not happen in Greece.

*  *  *
The bottom line – it’s over! Absent Russian ‘loans’ or Chinese infrastructure deals, the “Cyprus”-ing will begin shortly which perhaps Greek depositors will front-run better than the Cypriots.