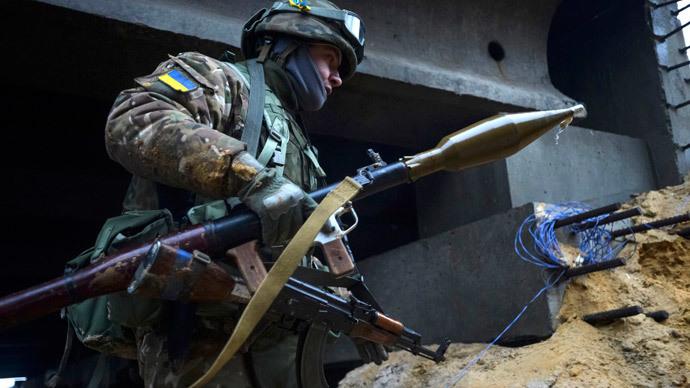 The anti-government activists claim they have hacked personal computer of Ukraine’s Judge Advocate General and copied a number of classified documents. These documents are allegedly exposing some dark secrets of Kiev’s authorities regarding the real state of things in the zone of the so-called ‘anti-terrorist operation’ in the eastern Donetsk and Lugansk regions of the country.

The price of the warfare resumed by President Petro Poroshhenko in the east is terrifying. The hacked documents claim at least 1,100 servicemen of the Ukrainian army have lost their lives over the period of the last two weeks. Many dozens Ukrainian soldiers gave up to separatist forces. Ukrainian army has lost over 100 tanks and the armored vehicles.

This information comes into collision with the latest reports by Kiev generals about “no losses”,“defeated enemy” and “thousands of eliminated terrorists”.

The explanation to this is simple: according to the documents allegedly hacked, Ukraine’s Security Service (SBU) has officially forbidden the Defense Ministry to reveal true casualties among servicemen. [SEE THE TRANSLATION BELOW]

Relating to orders by Defense Ministry, General Staff of Ukrainian Defense Forces and Head of anti-terrorist center of the Ukrainian Security Service to restrict from 26 Jan 2015 the presentation of data on real losses in the area of anti-terrorist operation.

1. Commanders of the military units shall present reports only to the anti-terrorist center Ukrainian servicemen taken out of the encirclement outside in Donetsk.(RIA Novosti / Gennady Dubovoy)

The documents the hacktivists claim they have obtained paint a grim picture of the Ukrainian warfare: discipline of the troops is undermined, troops are running out of reserves, mobilization is stalled as army draftees are escaping the country, mostly running to Russia and other neighboring states.

With the lack of the hardened troops, Ukrainian military leaders order recruits into meaningless attacks on multi-layered defenses of the separatists, which results in havoc and vast casualties.

The Ukrainian military have even employed barrier troops who fired at their fellow servicemen in order to prevent their retreat, as could be learnt from the documents.

CyberBerkut has accused Ukrainian commanders of defecting, leaving their subordinates on the battlefield. The zone along the frontline is full of prowling deserters and blood-thirsty psychopaths dressed up in Ukrainian uniforms, claims the group.

“We’re CyberBerkut. We don’t forget, we don’t forgive,” announced the hacktivists, promising to follow up on “other criminal organizations” that started “civil war in Ukraine.”