Why Putin is winning the new Cold War 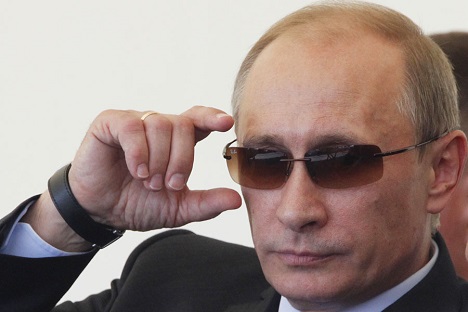 Why Putin is winning the new Cold War

The Russian President is using asymmetrical strategies to stop – and ultimately bring down – the enemies of the Russian state.

There are 7.2 billion people in this world but the United States fears only one man – Vladimir Putin. That’s because on virtually every front of the new Cold War, the Russian President is walloping the collective challenge of the West. Fear can make you do strange things. Forbes magazine has named Putin as the most powerful person on the planet for the second year running.

It is said about the Russians that they take a long time to saddle their horses but they ride awfully fast. After slowly nursing the collapsed Russian economy back to health, Putin is now going for broke. In Syria, Crimea and Ukraine, the West has melted away at his approach and has faced humiliating setbacks. In the field of energy, it will be Russian – not western – pipelines that will dominate the Eurasian landmass.

How Russian military might is eroding the Western alliance

But instead of scorekeeping, a more instructive exercise would be to try and understand how Putin has managed to keep Russia ahead in the game.

He knows their DNA

More than any other leader, the Russian President by virtue of his KGB experience understands how the United States operates. The American modus operandi – in sync with the British – is to organise coups, rebellions and counter revolutions in countries where nationalist leaders come to power. Iran, Chile, Ecuador, Venezuela, Panama and Ukraine are the classic examples.

John Perkins writes in Confessions of an Economic Hitman how he and other ‘hitmen’ like him were sent to developing countries as consultants to bribe or coerce diplomats, economists, administrators and politicians to do the bidding of the United States. Often they succeeded, but if they failed then the CIA would send in the ‘jackals’ – professionally trained assassins who would engineer the deaths of those who stood in the way of complete American domination.

This one-two punch by economic hitmen and assassins was so effective in creating banana republics that the United States rarely had to use any other means. Among the rare occasions the Americans had to use the military in pursuit of commercial aims was in Iraq, and to a limited extent in Libya.

Putin knows the US has attempted a similar approach in Russia. As a former KGB general stationed in East Germany he knows the hitmen are on the prowl. “One of the things to understand is that he in particular studied counter-intelligence which is key in understanding why he’s the critical player,” writes Joaquin Flores in the Center For Syncretic Studies. “Counter-intelligence is not just finding spies, but it’s actually countering the work of other agents who are embedded or whose work involves embedding themselves to destroy institutions from within.”

How sanctions are hastening the world without the West

Parallel to American black ops is naked war. It is now plainly evident that the United States economy – and that of its sidekick Britain – is a war economy. Russian presidential adviser Sergei Glazyev, known to be close to the nationalist core of Putin’s party, said at a round table in Moscow: “The Americans have gained from every war in Europe – World War I, World War II, the Cold War. The wars in Europe are the means of their economic miracle, their own prosperity.”

The war in Ukraine is clearly a pretext to pull Russia into a direct military confrontation with Ukrainian armed forces, in order to create a regional war in Europe.

Russia’s response is two pronged. One, by refusing to get into a shooting war with the Ukrainian thugs, it keeps the Americans frustrated. Washington’s inaction in Ukraine was brilliantly described by a Chinese general as a symptom of America’s strategic “erectile dysfunction”.

Secondly, Putin is employing asymmetrical strategies to stop – and ultimately bring down – the American empire. The primary target is to strike hard at the heart of American power – the dollar. Russia – with support from the BRICS – is moving away from dollar trade, a step that will seriously impact the barely growing American economy.

According to financial portal Zero Hedge, “Glazyev’s set of countermeasures specifically targets the core strength of the US war machine, i.e. the Fed’s printing press. Putin’s advisor proposes the creation of a ‘broad anti-dollar alliance’ of countries willing and able to drop the dollar from their international trade. Members of the alliance would also refrain from keeping currency reserves in dollar-denominated instruments….An anti-dollar coalition would be the first step for the creation of an anti-war coalition that can help stop the US’ aggression.

Why a militarily powerful Russia is good for the world

“Unsurprisingly, Glazyev believes the main role in the creation of such a political coalition is to be played by the European business community because America’s attempts to ignite a war in Europe and a cold war against Russia are threatening the interests of big European business.

“Judging by the recent efforts to stop the sanctions against Russia, made by the German, French, Italian and Austrian business leaders, Putin’s aide is right in his assessment. Somewhat surprisingly for Washington, the war for Ukraine may soon become the war for Europe’s independence from the US and a war against the dollar.”

Russia is also pushing for institutional changes. The $100 billion BRICS New Development Bank will not only counter the influence of western lending institutions but also stop the flow of cash from the developing countries to the West.

The current lending system is skewed in favour of the western countries because when the World Bank and IMF offer a loan, it comes with a basketful of conditions. For instance, the money can be used to purchase goods and services only from the West. Or the money can be used only for building dams but not to improve drinking water supplies.

Of course, the expertise and material for building dams will have to come from the West. And when the drinking water supply remains poor, it creates demand for bottled water from the West. The new bank will therefore hit the West where it hurts most – in its pocket.

Vladimir Putin most powerful person in the world – Forbes

While Putin has been making all the right moves on the geopolitical chessboard, his opponents aren’t sitting idle watching their empire fold up. Currently, the rouble is sliding against the American dollar even as the price of oil is being driven into the ground by the Saudis – most likely at the bidding of their American overlords. The Americans will relentlessly try to subvert Russia as it is the only country that stands between the United States and world domination.

However, Putin is a judoka who knows how to use his opponent’s force against the opponent itself. At any rate, all he needs to do is stop the barbarians at the gate. Reinforcements are coming from the East – mostly from China but India too – and it’s only a matter of time before the American-led forces are defeated.

Meanwhile, here’s a scoreboard for keeping track of how Putin stacks up against President Barrack Obama.