This Map Shows How Climate Change Will Screw The Whole World

Some effects of climate change are obvious, such as warming temperatures, melting ice caps, and rising sea levels. But other impacts are more surprising.

For example, climate change effects can harm food production and cause famines; alter habitats and cause mass die-offs of plants, animals and other organisms; and even threaten human health.

The biggest climate-related risks vary across different regions of the world. The handy chart below, published by the Intergovernmental Panel on Climate Change last Sunday, shows which regions should worry most about which issues.

Each graph shows risks for the present day (the top bar in the graphs), the near future (2030-2040), and the more distant future (2080-2100) under two conditions: one for a temperature increase of only 2 degrees Celsius (which it looks like we will blow out of that water) and the the bottom bar with an increase of 4C.

The symbols represent the risks, which include changes in terrestrial and marine ecosystems, food production, snow and ice cover, and human health. The longer the bar on the graph, the bigger the risk.

The chart shows that all regions face increasing risks to human health and livelihood. Additionally, each region has its own challenges: North America, for instance, will deal with an increase in both floods and wildfires, while Africa faces threats to its food production and water resources. In every region, the risks are projected to become more severe as time goes on. 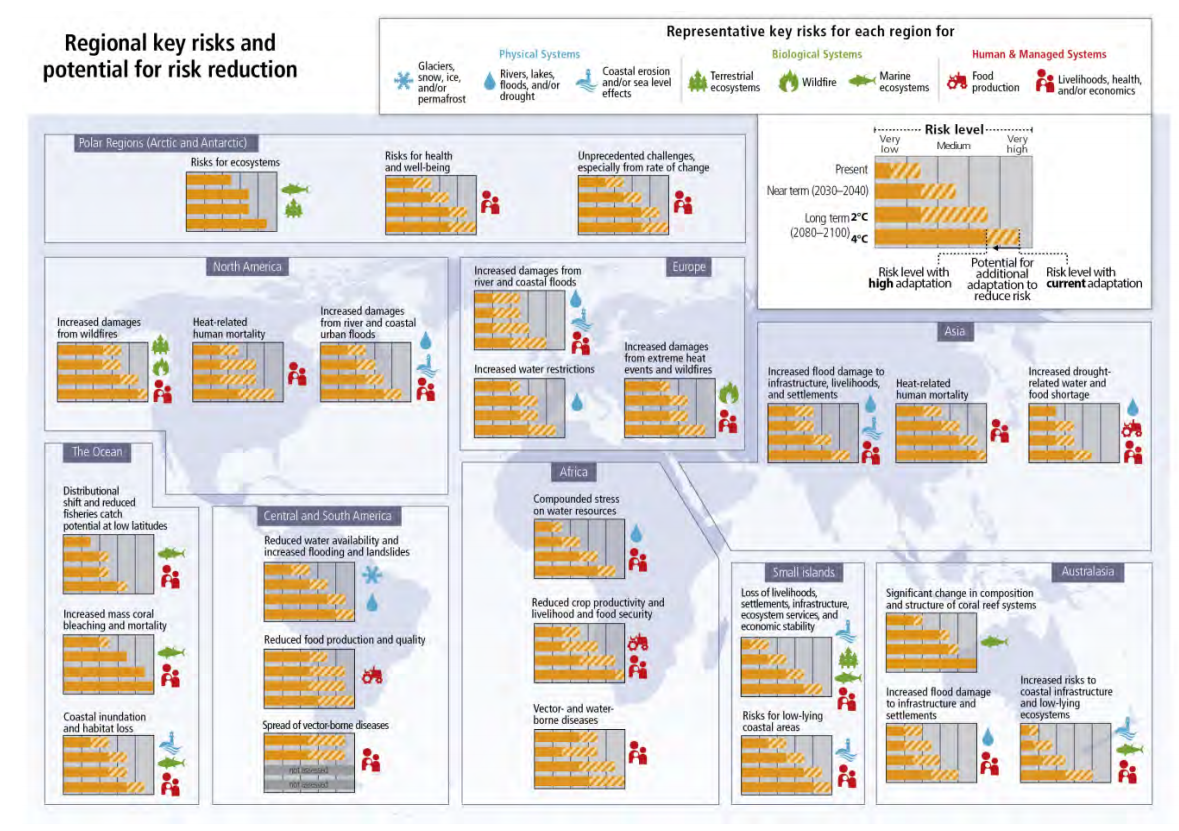 The chart was published as part of the IPCC’s Fifth Assessment Report on Climate Change, which presents and interprets the latest climate science from researchers all over the world.

The report notes that these climate effects will have social implications as well: “Climate change impacts are expected to exacerbate poverty in most developing countries and create new poverty pockets in countries with increasing inequality, in both developed and developing countries,” the authors write.

As the report shows, almost no facet of human life will remain untouched by climate change. The projections show us a world in which increases in extreme weather, changing land- and seascapes, disease, famine, and poverty may compose a new normal for Planet Earth.