Europe may become irrelevant due to short-sighted policies – Gorbachev 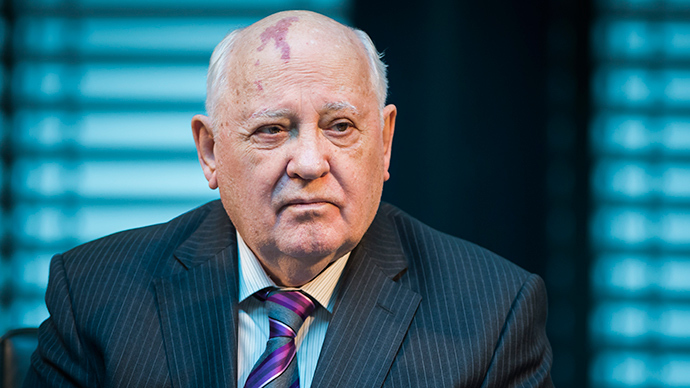 Former President of the Soviet Union Mikhail Gorbachev attends a symposium on security in Europe 25 years after the fall of the “Wall” in Berlin on November 8, 2014 (AFP Photo / Odd Andersen)

Europe may become irrelevant due to short-sighted policies – Gorbachev

Western policies toward Russia championed by Washington have led to the current crisis, and if the confrontation continues, Europe will be weakened and become irrelevant, former Soviet leader Mikhail Gorbachev warns.

Speaking to a forum in Berlin amid the celebration of the 25th anniversary of the fall of the Berlin Wall, he called on western leaders to de-escalate tensions and meet Russia halfway to mend the current rift. After the Cold War ended, the leaders of the western world were intoxicated with euphoria of triumph, and they adopted anti-Russian policies that eventually led to the current crisis, Gorbachev said.

“Taking advantage of Russia’s weakening and a lack of a counterweight, they claimed monopoly leadership and domination in the world. And they refused to heed the word of caution from many of those present here,” he said. “The events of the past months are consequences of short-sighted policies of seeking to impose one’s will and fait accompli while ignoring the interests of one’s partners.” Gorbachev gave a list of examples of those policies, including the expansion of NATO and the development of an anti-ballistic missile system, military interventions in Yugoslavia and Iraq, the west-backed secession of Kosovo, the crisis in Syria and others. The Ukrainian crisis is a “blister turning into a bleeding, festering wound,” he said. Europe is the one suffering most from the situation, Gorbachev said.

“Instead of becoming a leader of change in a global world Europe has turned into an arena of political upheaval, of competition for the spheres of influence, and finally of military conflict. The consequence inevitably is Europe’s weakening at a time when other centers of power and influence are gaining momentum. If this continues, Europe will lose a strong voice in world affairs and gradually become irrelevant,” he said. What needs to be done is for the west to tone down its anti-Russian rhetoric and seek points of convergence, Gorbachev said. He added that his own experience in the 1980s showed that much worse and seemingly hopeless conflicts can be resolved, granted there is the political will and a right setting of priorities. He assured the forum that the Russian leadership was willing to do its part, as evidenced by President Vladimir Putin’s keynote speech at the Valdai Forum.

“Despite the harshness of his criticism of the West and the United States in particular, I see in his speech a desire to find a way to lower tensions, and ultimately to build a new basis for partnership,”Gorbachev said. Ukraine may have set the scene for the current confrontation, but it can also become a focus for reconciliation between Russia and the West, according to Gorbachev. He called for the parties to join forces and help Ukraine overcome the consequences of the civil war it is currently going through. Over the longer term, the system of European security must be reformed, because the enlargement of NATO and the current EU common defense policy have failed to produce positive results, Gorbachev said. This would likely require an overhaul of the OSCE, which in its current format is not up to the task, he said, while proposals to that effect have been voiced by policymakers both in the EU and in Russia, but they had been “filed away in the archives.”

“Had such a mechanism been created, the worst scenarios of the Ukrainian events could have been averted.”