Erdogan Proclaims That The West Cannot Be Trusted In The MidEast 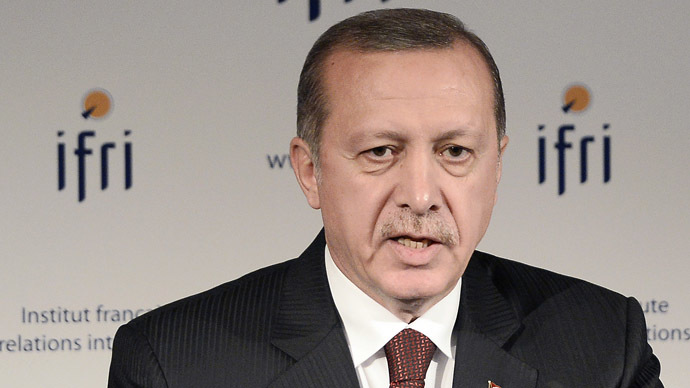 Erdogan Proclaims That The West Cannot Be Trusted In The MidEast

Muslim countries are able to solve their problems on their own, the Turkish president believes. He says far from offering help, the West is actually exploiting “conflicts in the Middle East” and only cares about the region’s riches.

Recep Tayyip Erdoğan has urged Islamic countries to unite in order to solve “the biggest humanitarian and political crisis in their history,” according to AFP, citing the Turkish president’s speech in Istanbul on Thursday.

“The only condition to overcome the crisis in the Islamic world is unity, solidarity and alliance,” he said. “Believe me, we can resolve every problem as long as we are united.”

Erdogan says there is no use counting on help from the Western world.

“I speak openly, foreigners love oil, gold, diamonds, and the cheap labor force of the Islamic world,” he said. “They like the conflicts, fights and quarrels of the Middle East. Believe me, they don’t like us.”

“They look like friends, but they want us dead, they like seeing our children die,” the president went on.

Turkey has recently had its relations with the US strained over the Washington-led military operation against the Islamic State extremist group.

The US has been pushing for Turkey’s more active participation in the conflict, which Ankara has largely resisted, in its turn demanding support from Washington in bringing down Syria’s president Assad.

Erdogan has called the US attempt to get Turkey more involved in the conflict “impertinent.” “Why is somebody coming to this region from 12,000 kilometers (7,000 miles) away?” Erdogan said on Wednesday, according to AFP. “I want you to know that we are against impertinence, recklessness and endless demands,” he added.

The comment was made shortly after US Vice President Joe Biden visited Turkey. Biden’snegotiations with Erdogan failed to resolve the differences between the two NATO allies.

Erdogan also lashed out at Western journalists for mocking his remarks on the presence of Muslims in America long before the continent was discovered by Columbus.

Erdogan’s claim is based on a 1996 paper from Youssef Mroueh of the As-Sunnah Foundation of America, who says Columbus’s diary mentions a mosque he saw while sailing near Cuba. The theory has hardly found any support within the scientific community.

However, Erdogan’s faith in the controversial study remains unshattered.

“They have been very disturbed by the fact that we have reminded them of some historical facts, the history of civilization, science, politics and war. They don’t want us to question anything,” Erdogan said.