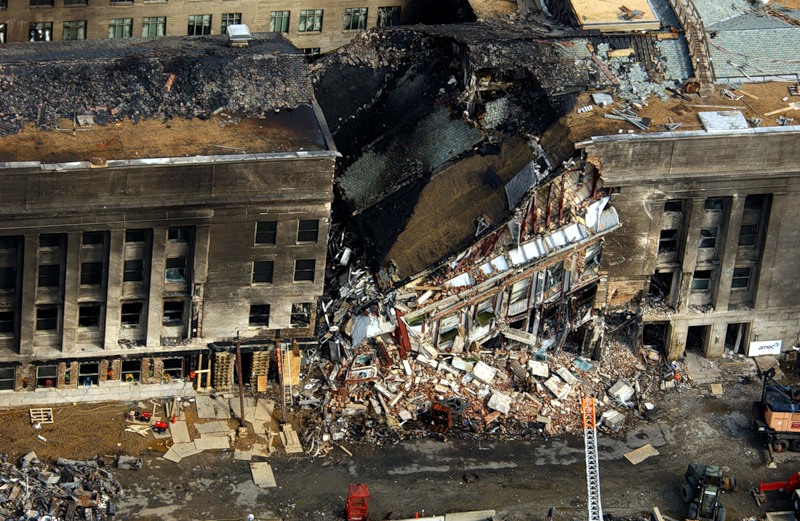 When faced with former Secretary of Transportation Norman Mineta’s testimony — about Cheney’s stand-down order as the plane approached the Pentagon — Defenders of the official story have tried to discredit Mineta by saying that he got his times mixed up.

“When I got to the White House, it was being evacuated. I met briefly with Richard Clark, a National Security Council staff member, who had no new information. Then the Secret Service escorted me down to the Presidential Emergency Operations Center, otherwise known as the PEOC.”

Defenders of the official myth say that the White House was not being evacuated at the time Mineta said, and that this proves Mineta got his story wrong, and that in fact Cheney wasn’t in the PEOC until later — after the Pentagon was hit.

THIS IS A RUSH TRANSCRIPT. THIS COPY MAY NOT BE IN ITS FINAL FORM AND MAY BE UPDATED.

THIS IS A RUSH TRANSCRIPT. THIS COPY MAY NOT BE IN ITS FINAL FORM AND MAY BE UPDATED.
We also have a report now that it was a plane that crashed into the Pentagon, and we have a large fire at the Pentagon. The Pentagon is being evacuated as we speak now. The White House had been evacuated as well.

JOHN KING, CNN SENIOR WHITE HO– USE CORRESP.: Aaron, I’m standing in Lafayette Park, directly across the White House, perhaps about 200 yards away from the White House residence itself. The Secret Service has pushed most people all the way back to the other side of the park. I’m trying to avoid having that done to me at the moment.

About 10 minutes ago, there was a white jet circling overhead. Now, you generally don’t see planes in the area over the White House. That is restricted air space. No reason to believe that this jet was there for any nefarious purposes, but the Secret Service was very concerned, pointing up at the jet in the sky.

It is out of sight now, best we can tell. They’ve evacuated the entire White House staff and the old executive office, as well as some townhouses that are government offices. Many of our viewers might know Blair House, where other international leaders say when they are in Washington. That block of townhouses has been evacuated as well. They are pushing us now back towards 8th Street, which is the next main street to the north from Pennsylvania Avenue, across from the White House.

BROWN: John, hang on one second. We are getting reports that the Capitol, the Treasury building also being evacuated.

John, is this evacuation from the White House, was it orderly? Did it seem panicky? How would you characterize it?

KING: It started off as orderly, much like we get when there are ocassional bomb scares near the White House. But then, again in the last 10 minutes or so, the people who came out — the last several hundred I saw leaving the grounds, were told and ordered by the Secret Service to run. They were running through the gates. These were of course professionals in business suits.

I’m also told that prior to that, and we don’t know the current situation that the vice president and other administration officials on the scene very meeting in the White House situation room, which is in the basement of the White House. Whether they have stayed on the complex or not is unknown to us at this moment.

I spoke to an administration official shortly after the president delivered his statement. He said obviously the operating assumption here is terrorism. The initial assumption, this official said, was that this had something to do, or at least they were looking into any possible connection with Osama Bin Laden. The administration recently released a warning that they thought Osama Bin Laden might strike out against U.S. targets.

BROWN: Just to add at bit, John, to what you’ve been saying. We’re getting a report from the Associated Press now that the White House was evacuated after the Secret Service received what the AP is describing as a credible threat of a terrorist attack against the White House itself. I expect you’ll be checking that out. We’ll try and confirm that. But that is what AP is reporting right now.”

The Pentagon was attacked at approximately 9:37 a.m. Eastern Time, which was 15 minutes before the CNN report. However, the CNN report states that the White House evacuation began about 30 minutes prior to the report.

Therefore, if Mineta arrived at the White House around 9:22 or 9:20 a.m. Eastern Time, the White House evacuation could have commenced. Mineta could then have gone down to the PEOC, and overheard the conversation between Cheney and the young officer. In other words, there are approximately 15 minutes of time in which this could have occurred — more than enough for the events Mineta described to have taken place.

“MR. ROEMER: So when you arrived at 9:20, how much longer was it before you overheard the conversation between the young man and the vice president saying, “Does the order still stand?”

MR. ROEMER: So about 9:25 or 9:26. And your inference was that the vice president snapped his head around and said, ‘Yes, the order still stands.'”

Admittedly, counter-terrorism chief Richard Clarke said that his recommendations to evacuate the White House were not carried out until 9:45. However, that might very well refer to a full evacuation ordered by the Secret Service itself. It appears that a partial or informal evacuation had already commenced much earlier, ordered by someone other than the secret service.

Indeed, Richard Clarke corroborates Mineta’s testimony that Cheney was in the PEOC prior to the Pentagon strike. As the Complete 911 Timeline states:

According to counterterrorism “tsar” Richard Clarke and others, Vice President Cheney goes from his White House office to the Presidential Emergency Operations Center (PEOC), a bunker in the East Wing of the White House, at about this time. National Security Adviser Rice, after initiating a video conference with Richard Clarke in the West Wing, goes to the PEOC to be with Cheney. There is no video link between response centers in the East and West Wings, but a secure telephone line is used instead. [New York Times, 9/16/2001; Daily Telegraph, 12/16/2001; ABC News, 9/14/2002; Clarke, 2004, pp. 3-4] One eyewitness account, David Bohrer, a White House photographer, says Cheney leaves for the PEOC just after 9:00 a.m. [ABC News, 9/14/2002] However, there is a second account claiming that Cheney doesn’t leave until sometime after 9:30 a.m. In this account, Secret Service agents burst into Cheney’s White House office. They carry him under his arms—nearly lifting him off the ground—and propel him down the steps into the White House basement and through a long tunnel toward an underground bunker. [New York Times, 10/16/2001; Newsweek, 12/31/2001; Washington Post, 1/27/2002; BBC, 9/1/2002; MSNBC, 9/11/2002; 9/11 Commission, 6/17/2004] At about the same time, National Security Adviser Rice is told to go to the bunker as well. [ABC News, 9/11/2002] In addition to the eyewitness accounts of Clarke and Bohrer, ABC News claims that Cheney is in the bunker when he is told Flight 77 is 50 miles away from Washington at 9:27 a.m., suggesting that accounts of Cheney entering the bunker after 9:27 a.m. are likely incorrect.” (see original for links)

Indeed, you can listen to Clarke tell what he saw in his own words and in his own voice by listening to the following 4 audio clips: Part 1; Part 2; Part 3; and Part 4 (Clarke narrating the books-on-tape version of chapter 1 of his book Against All Enemies).

Since the Pentagon strike occurred at approximately 9:37, and since Clarke, Bohre, ABC News, Mineta and others placed Cheney in the PEOC prior to the strike, and since Mineta and CNN stated that the White House was being evacuated prior to the strike, it makes more sense that Clarke simply did not know about the earlier White House evacuation efforts, or that he didn’t consider them to be the full-scale, speedy, secret service-coordinated type of evacuation which he envisioned.

What Does Dick Cheney Say?

Mr. Cheney has recently testified that he did not enter the PEOC until around 20 minutes after the Pentagon strike. However, his initial testimony, 5 days after the attack, was:

“[A]fter I talked to the president, . . . I went down into . . . the Presidential Emergency Operations Center. . . . [W]hen I arrived there within a short order, we had word the Pentagon’s been hit.”

Changing testimony tends to discredit a witness’s credibility, especially if he, himself, is a suspect.

Well over a year before Mineta’s testimony to the 9/11 Commission,Washington Post reporter Bob Woodward corroborated much of Mineta’s testimony (and destroyed any claim that the government could not track the basic position of the hijacked plane because it had turned off its radar transponder):

“Transportation Secretary Norman Y. Mineta, summoned by the White House to the bunker, was on an open line to the Federal Aviation Administration operations center, monitoring Flight 77 as it hurtled toward Washington, with radar tracks coming every seven seconds. Reports came that the plane was 50 miles out, 30 miles out, 10 miles out-until word reached the bunker that there had been an explosion at the Pentagon.”

(Remember also that the FAA set up a telephone bridge with the military long before 9:37, so whatever Mineta was telling the FAA would have immediately been passed on to the military).

And Mineta’s general outline of the timing of the Pentagon strike is corroborated by the fact that Flight 77 was 38 miles from the Pentagon at approximately 9:29 a.m. (the plane did a bunch of loop-de-loops on its way down, and did not fly a direct route in its final descent). At the very least, this puts the plane in the same basic region it should be in according to Mineta’s timeline.

Could Mineta have Confused Flight 77 with Flight 93?

However, the flight path of Flight 93 shows that its closest proximity to the Pentagon and the White House was probably when it crashed (or if it got closer prior to crash, it never got much closer).

Therefore, Mineta could not have been referring to Flight 93.

Moreover, in his testimony before the 9/11 Commission, Mineta made it abundantly clear that he was not referring to Flight 93. Immediately after Mineta’s testimony about Cheney’s exchange with the young officer, the following exchange between Mineta and Hamilton takes place:

“MR. HAMILTON: The flight you’re referring to is the —

MR. MINETA: The flight that came into the Pentagon.

***
And so then, at the time we heard about the airplane that went into Pennsylvania, then I thought, “Oh, my God, did we shoot it down?” And then we had to, with the vice president, go through the Pentagon to check that out.

MR. HAMILTON: With respect to Flight 93, what type of information were you and the vice president receiving about that flight?

MR. MINETA: The only information we had at that point was when it crashed.

MR. HAMILTON: I see. You didn’t know beforehand about that airplane.

Mineta was thus confident that Cheney’s tracking of and communications regarding the plane were with regard to the Pentagon, and not Flight 93.

Yet another attempt to defend the official story has been debunked.

UPDATE: Mineta has again confirmed his testimony here (interview with Mineta; the video is slow to load, so please be patient).

Robert Moore found the CNN transcript, and all credit goes to Robert for the catch and for pointing out the significance in relation to Mineta’s testimony. Personally, I think Robert is one of the best 9/11 researchers anywhere. Stay tuned for more stunning catches from Robert.