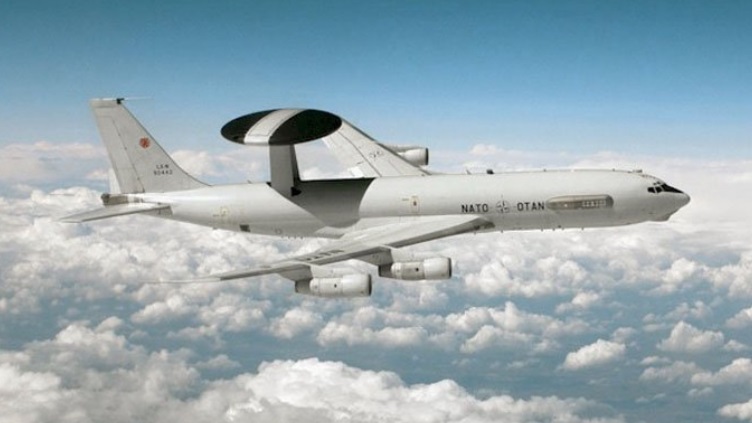 The 10-day NATO exercise code named «BREEZE 2014» has ended in Black Sea. The exercise, which included the use of electronic warfare and electronic intelligence aircraft such as the Boeing EA-18G Growler and the Boeing E3 Sentry Airborne Warning and Control System (AWACS), coincided with the shootdown of Malaysian Airlines Flight 17 in eastern Ukraine, some 40 miles from the Russian border. NATO ships and aircraft had the Donetsk and Luhansk regions under total radar and electronic surveillance.

MH-17 was shot down over a region where Russian-speaking separatist forces have been battling against the alliance of the Ukrainian armed forces and a private mercenary force answerable to a Ukrainian-Jewish billionaire oligarch.

Past NATO-Ukraine exercises in Crimea were called «SEA BREEZE». This year’s annual SEA BREEZE exercise with Ukraine, approved by the rump Ukrainian Parliament, is clouded in mystery with the Pentagon saying it was only «in the planning stage and we can’t announce dates yet». However, 200 U.S. Army personnel normally assigned to bases in Germany were in Ukraine during the time of the MH-17 fly-over. They were participating in NATO exercise RAPID TRIDENT II. Ukraine’s Ministry of Defense led the exercise.

BREEZE included the AEGIS-class guided missile cruiser USS Vela Gulf.  AEGIS cruisers’ AN/SPY 1 radar has the ability to track all aircraft over a large region. For example, the AEGIS test center in Moorestown, New Jersey, was able to see the Boeing 747 TWA Flight 800 when it disappeared from radar screens in 1996 near East Moriches Bay, Long Island. According to Lockheed Martin personnel who operated the AEGIS test center in New Jersey, the Navy ordered the SPY 1 radar turned off for «maintenance» shortly before the downing of TWA 800.

From the Black Sea, the Vela Gulf was able to track Malaysian Airlines 17 over the Black Sea and any missiles fired at the plane. U.S. AWACS electronic intelligence (ELINT) aircraft were also flying over the Black Sea region at the time of the MH-17 flyover of Ukraine. Growler aircraft have the capability to jam radar systems in all surface-to-air threats.

The announcement of U.S. BREEZE and RAPID TRIDENT II military maneuvers came on May 21, 2014, and were announced on the website operated by Vice President Joe Biden’s office. Biden’s son, Hunter Biden, is a newly-named director of the Ukrainian natural gas and oil company Burisma Holdings, Ltd., owned by IhorKolomoisky, the Ukrainian-Israeli mafia oligarch, whose is known as the «Chameleon». Kolomoiskyhas raised his own mercenary army, complete with the BUK missiles allegedly used in the shootdown of MH-17. Kolomoisky, the Governor of Dnipropetrovsk oblast in eastern Ukraine, has threatened terrorist attacks against Russian-speaking officials in eastern Ukraine, including assassinations.

Burisma is a typical RUIM [Russian – Ukrainian – Israeli – Mafia] operation, with subsidiaries in such tax havens as Cyprus and the British Virgin Islands. It is part of Kolomoisky’s large umbrella corporation called Privat Group.

Kolomoisky, estimated to be the second-richest person in Ukraine, also has strong connections inside Kiev’s Borispol International Airport, where it has been reported that Ukrainian Interior Ministry troops stormed the air traffic control tower shortly before MH-17 was shot down. A Spanish air traffic controller, who possessed knowledge of the Ukrainian Interior Ministry’s involvement in the shootdown of MH-17, reportedly had his life threatened by people he described as «Maidan» troops, a reference to the Maidan Square uprising that toppled the Ukrainian government earlier this year. The Spanish controller, identified only as «Carlos,» understood that the shootdown of MH-17 was carried out by supporters of former Ukrainian Prime Minister YuliaTymoshenko and Interior Minister ArsenAvakov. Kolomoisky is a political ally of Tymoshenko and Avakov.

Kolomoisky, until 2012, owned Aerosvit Airlines, which used Borispol as a hub, and Donbassaero, which was based out of Donetsk Airport. Aerosvit leased all of its planes, including a Boeing 767, from Boeing Capital. After filing for bankruptcy, Aerosvit and Donbassaero ceased flying in April 2013. Among other Kolomoisky airlines, Skyways Express, based out of Stockholm ArlandAirport; City Express, based at Gothenburg, Sweden Airport; and Cimber Sterling, based out of Sønderborg and Copenhagen Kastrup Airports in Denmark, all filed for bankruptcy in 2012. Kolomoisky continues to be active in commercial aviation. His Private Group owns Dniproavia, which is based at Dnipropetrovsk Airport.Kolomoisky’s aviation and Israeli security contacts gives him carte blanche access to secure airport facilities in Europe and around the world.

Kolomoisky’s forces are armed with advanced weaponry, obtained both from Ukrainian weapons inventories and from purchases on the black market. Kolomoisky’s forces reportedly possess the BUK surface-to-air missile system said to have been used to shoot down MH-17. Kolomoisky’s forces, comprising Ukrainian regular military personnel; neo-Nazi units from west Ukraine, and foreign mercenaries, including Georgians, Romanians, and white supremacists from Sweden and Germany; and ex-Israel Defense Force Blue Helmet commandos, are mainly separated into four battalions: the Azov Battalion; the Aidar Battalion, the Donbass Battalion; and the 2,000-strong Dniepr-1 (or Dnipro-1) Battalion, which was responsible for the deadly May 1 fire-bombing of the trade union building in Odessa and the burning alive of people trapped inside the Mariupol Police Station on May 9. Dnipro-1 also maintains a 20,000-member reserve force.

At the heart of Kolomoisky’s Army is a Nazi «Brownshirt»-style force of ardent Kolomoisky loyalists who have used guns, iron bars, and batons to seize control of factories and offices in Ukraine that Kolomoisky has expropriated from so-called «separatist» sympathizers.

Some of the Georgians who serve in Kolomoisky’s Army have reportedly been trained in the use of BUK missile systems previously sold by Ukraine to Georgia under the presidency of MikheilSaakashvili. Kolomoisky has utilized ex-President Saakashvili’s «consulting services» in Dnipropetrovsk in the military and political campaign against the breakaway people’s republics of Donetsk and Luhansk.

Kolomoisky placed a one million dollar bounty on Ukrainian Member of Parliament member Oleg Tsarev, who fled to Russia after being severely beaten by Ukrainian right-wingers in Kiev.

Kolomoisky chooses to «command» his army from the safety of Switzerland, far from the front lines and relatively safe from arrest if his ties to terrorist attacks are ever pursued by legitimate governmental authorities.Kolomoisky has a powerful «insurance policy» against any legal recriminations. He counts on the powerful Israel Lobby in the United States to support his cause. Kolomoisky has publicly spoken of Ukraine as the «second homeland» of the Jewish people. And with «The Lobby» in his corner, Kolomoisky has indirect access to the highest levels of power within the Department of Defense, NATO, and the U.S. Intelligence Community.

A Malaysian Airlines Boeing 777, the same type that was used by MH-17 and the still-missing Malaysian Airlines flight 370, which disappeared on March 8 while en route from Kuala Lumpur to Beijing, is stored in a hangar at Ben Gurion International Airport in Tel Aviv. The Boeing 777 in Israel, with serial number 28416,  Malaysia registration tail numb 9M-MRI, was sold to GA Telesis, LLC of Fort Lauderdale, Florida, on October 21, 2013. The Boeing 777 was re-registered with the United States tail number N105GT and first stored at Tarbes Lourdes Pyrenees airport and on November 4, 2013, was transferred to Tel Aviv, where it was last spotted in a hangar.

GA Telesis was founded by its CEO, AbdolMoabery. GA Telesis, a global aircraft leasing firm, is now owned by Bank of America Merrill Lynch and Century Tokyo Leasing. Moabery, a former U.S. Naval officer, formerly worked for Aviation Systems International, Inc. as executive vice president and for C-S Aviation Services, Inc. as sales and marketing director. Both of Moabery’s former companies are partly-owned by George Soros, who is partly responsible for laying the groundwork for the Ukrainian coup that ousted President Viktor Yanukovych. C-S (Chatterjee-Soros) Aviation is co-owned by Purnenda Chatterjee, who runs the Chaterjee Group, an investment firm.

The executive chairman of GA Telesis Composite Repair Group, LLC, which would be responsible for retrofitting the Malaysian Boeing 777 in Tel Aviv is Aviv Tzur, an Israeli national who was previously the chairman of Ultimate Aircraft Composites (UAC), an Israeli-staffed firm that merged with GA Telesis. UAC, like GA Telesis, specializes in repairing and retrofitting aircraft. UAC also had contracts with the Israeli government.

The presence of a Malaysian Airlines Boeing 777 in Tel Aviv, the mysterious disappearance of a second Malaysian Boeing 777 on a flight from Kuala Lumpur to Beijing, and the attack on yet a third Amsterdam-to-Kuala Lumpur Malaysian Boeing 777 over eastern Ukraine may be more than coincidental. Amsterdam’s Schiphol Airport is a center for Israeli Mossad activity in Western Europe. Israeli-owned ICTS controls the security at Schiphol for passengers and cargo. It was ICTS that permitted Nigerian national Umar Farouk Abdulmutallah to slip past Schiphol’s normally stringent security on Christmas 2009 and board a Northwest Airlines Airbus bound for Detroit. While approaching Detroit, Abdulmutallah, who was permitted to board by ICTS in Amsterdam without a passport or U.S. visa, tried to detonate explosive materials sewn into his underpants.

The seizure of the air traffic control center at Borispol by allies of Kolomoisky shortly before the shooting down of MH-17 and Kolomoisky’s strong links to Israel, which benefitted immensely from the downing of MH-17 because it drew the attention of the world’s media away from its ground invasion of Gaza, which began just as initial reports about the fate of MH-17 were being transmitted, may be the real story behind the loss of Malaysian Airlines Flight 17 and the horrible deaths of its 298 passengers and crew.