Jack Tibbetts, a member of the Santa Rosa, Calif., city council, knew he had a problem. It was early 2018, and he’d started getting calls from constituents at opposite ends of the political spectrum. The common thread: cellular antennas going up next to their homes, causing concerns over property values and health.

The weight of evidence suggests that if radio-frequency emissions have any effect on humans at all, it is, according to the World Health Organization, about on par with other “possibly carcinogenic” substances, including coffee and pickles. The Federal Communications Commission, citing input from the Food and Drug Administration, recently declared that existing limits on the amount of radio-frequency energy these antennas put out make them safe. A senior FCC official said there is nothing unique to 5G networks that poses additional health risks.

None of this has stopped the social-media-fueled conspiracy whirligig that allows health scares to thrive on the internet.

Cities and towns throughout Northern California are issuing ordinances that would exclude new 5G cell sites from residential areas, citing supposed health concerns. Residents of Portland, Ore., and Whitefish, Mont., have also cited these beliefs while lobbying for restrictions. Legislators in four states including New Hampshire have proposed bills that would mandate further study of health effects or else urge Congress to do so, and Congressman Thomas Suozzi (D., N.Y.) wrote to the FCC echoing these concerns.

For Mr. Tibbetts, it didn’t matter whether or not these new “small cell” antennas—which are used for 4G networks but can be upgraded for 5G—going up in Santa Rosa were actually dangerous. Some were attached to utility poles a mere 20 feet from people’s bedroom windows, and residents complained Verizon had put them up without notifying them. What mattered was that his constituents didn’t want these ungainly chunks of public infrastructure anywhere near them.

“I don’t like the idea of someone being in their home and it’s supposed to be a place of security, and they are having that feeling of insecurity,” Mr. Tibbetts says. “I won’t be surprised if in 10 years there’s no evidence of cancer from these towers, but my job is not to protect Verizon, it’s to protect people in their houses.”

Whatever the basis for residents’ objections to new cell towers, Mr. Tibbetts—as well as countless mayors, governors and council members across the country—have little or no power under current rules to act on their constituents’ wishes. Nor do they have the leeway they once did to set pricing for cell sites, a lucrative source of funding for civic initiatives. Those who do take action are creating ordinances that put their cities at risk of being sued by the telecoms, as happened this month in Rochester, N.Y.

Billed as the key to the future—of telecommunications, of global competition, of innovation and even of municipal infrastructure—5G has instead become a bone of contention. In addition to upgrading existing towers, it will require an estimated half-million new towers and small-cell sites on utility poles, lampposts and buildings. Experts also anticipate a long rollout period, potentially of a decade or more.

Most cities want 5G, but they don’t want to be told how, when and at what cost. Rules the FCC has already passed, meant to expedite 5G’s rollout, might well be creating acrimony that serves to do the exact opposite.

“My personal reason for doing this is I believe that humanity is threatened,” says Sandi Maurer, a member of the activist group EMF Safety Network, which lobbies to reduce people’s exposure to electromagnetic fields.

Partly as a result of such activism, many towns in Marin County, Calif., have passed ordinances or resolutions that limit 5G cell sites in residential areas. Towns like Mill Valley specify zones where towers aren’t permitted, and may also require them to be a certain distance from each other. In 2018, Verizon withdrew its application to install two small cells in Sebastopol, Calif., rather than sue the city or refer the matter to the FCC.

But since then, the FCC has rolled out its 5G Fast plan requiring cities and states to approve new 5G antennas within 60 or 90 days. It also limits what government leaders can charge carriers for the real estate on which the new infrastructure will hang—be it a utility pole, streetlight or even building facade.

Carriers love this plan. A spokesman for AT&T referred to a statement lauding the FCC’s new rules, saying they “will help ensure that, through tried and true free-market incentives, all Americans no matter where they live will enjoy the benefits of jobs, investment, and economic growth this new technology will foster.” A Verizon spokesman said, “We’re looking for reasonable access and reasonable prices so that we can deploy 5G effectively and promptly to communities and the people who live and work in them.”

FCC chairman Ajit Pai and President Trump have both said that widespread deployment of next-generation 5G wireless networks is critical to winning the race with China. A spokesman for the FCC referred to previous statements by the agency: “To enable broadband providers to enter new markets and deploy high-speed networks, access to poles must be swift, predictable, safe and affordable.”

City leaders say their power to zone and regulate infrastructure is being abridged. More than 90 cities and counties have joined together in a lawsuit, currently before the Ninth Circuit Court of Appeals, arguing that the FCC has overstepped its authority. A decision could happen as early as in the spring, but it could also take much longer.

San Jose, Calif., has already permitted 596 small-cell sites, all of which can be upgraded to 5G, says Shireen Santosham, the city’s chief innovation officer. When that rollout began, San Jose signed agreements with telecoms for between $750 a pole and $2,500 a pole for the new small-cell sites. If the cities lose their suit against the FCC, San Jose might be forced to charge less than the lowest amount it had previously charged per pole. 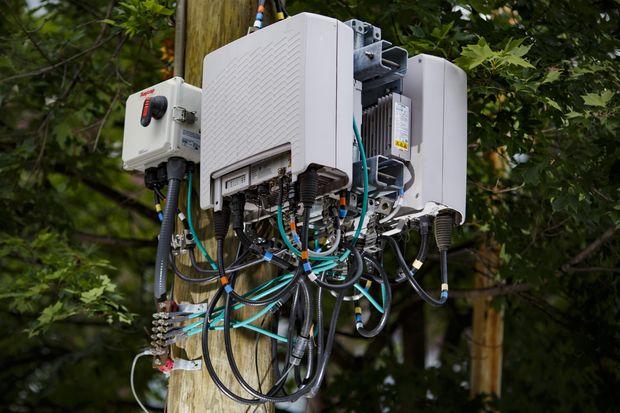 An AT&T 5G small-cell setup hangs on a pole in Atlanta. Some cities have challenged carriers on the size and shape of 5G cells. PHOTO: MELISSA GOLDEN FOR THE WALL STREET JOURNAL

The city very much wants a 5G rollout, says Mayor Sam Liccardo. But like other cities, San Jose wants to be able to charge higher prices for use of its infrastructure, not only to fund staffing to expedite permits for new sites but also to supply the $1 million to $2 million needed to support a program to deliver broadband access to poor households.

“If we lose the money, the program pretty much grinds to a halt,” says Ms. Santosham. “Deployment will slow down, and the money to close the digital divide goes away.”

This sort of thing could happen in other cities, despite FCC rules that say permits are automatically approved after 60 or 90 days, says Mr. Liccardo. “There are lots of ways for local bureaucracies to make it difficult even when the federal government says they must,” he adds.

Blair Levin, a fellow at the Brookings Institution and a former chief of staff for FCC chairman Reed Hundt, said, “What the wireless guys are asking is for cities to treat them totally different than every other entity asking for construction permits. I think it will backfire because, in the fullness of time, instead of a cooperative relationship you’ll get a hostile relationship.”

The prime example is Rochester, which was on the receiving end of a lawsuit filed by Verizon on Aug. 8. Verizon claims the city’s code violates FCC rules by “imposing upon wireless providers non-cost-based fees on the deployment and maintenance of small wireless facilities.” Translation: Verizon thinks the city is charging too much rent for space on its utility poles where 5G antennas would be installed. A city spokesman says the fees are in line with what other providers pay and calls the suit frivolous.

“The federal framework calls for nondiscriminatory access at cost-based rates, and that is what we are seeking,” said a Verizon spokesman. “That means the federal rules prohibit special treatment.”

The health argument is hard to take to court because the FCC has sole discretion over whether the emissions of an electronic device are safe, a right unquestioned by any current court cases or pending federal legislation. A different—and so far more successful—tack has been to challenge carriers on the size and shape of the 5G cells.

In a legal challenge to the FCC’s current rules undertaken by the United Keetoowah Band of Cherokee Indians in Oklahoma, the D.C. Circuit Court recently ruled against the FCC, asserting, among other things, that 5G “small cells” aren’t nearly as small as advertised.

In its brief, the industry has said these new antennas are only as big as a pizza box, and that in other respects they are comparable to home Wi-Fi routers. But the court said that, especially when they sit atop newly installed towers, they are in fact big and obtrusive enough that they require a review of their environmental impact, and that they are subject to historic-preservation rules.

“Even if only 20% of small cells required new construction, as one wireless company estimates and the FCC highlights in its brief…that could entail as many as 160,000 densely spaced 50-foot towers,” writes the court.

Despite all this conflict, most cities remain eager for telecoms to bring 5G to their streets, says Craig Moffett, founder and senior analyst at MoffettNathanson, a communications research firm. The industry is promising a veritable cornucopia of fantastical technologies will flow from ubiquitous, ultrafast wireless—a smarter city where your autonomous car, your augmented-reality headset and your self-emptying trash bin are always in constant contact.

“It may be in retrospect we look back and laugh at how silly we all were at wondering what applications this will be used for,” Mr. Moffett said.

—For more WSJ Technology analysis, reviews, advice and headlines, sign up for our weekly newsletter.