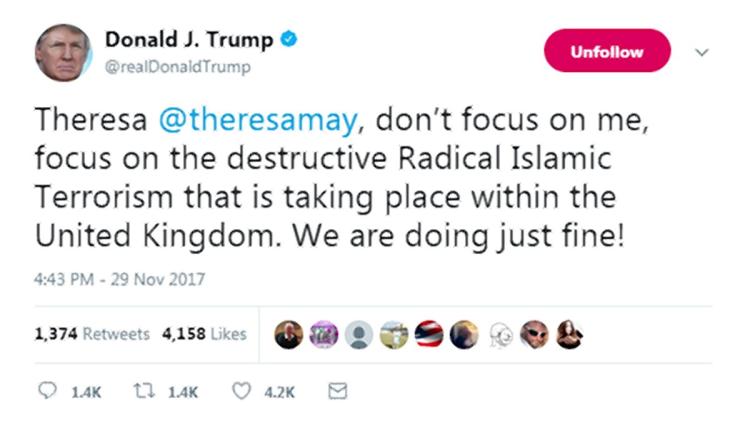 Here’s what’s really going on.  Be sure to read the blued out screenshot below:

N.B. The comment excerpt posted above was taken from the following article:
Trump Sparks Outrage In UK With “Truculent Tweet” To Theresa May After Retweeting Far-Right Videos

President Trump sparked outrage among Britain’s political establishment on Thursday with a sharp rebuke on Twitter of Prime Minister Theresa May on Twitter after she criticized him for retweeting British far-right anti-Islam videos. Following Trump’s condemnation by British politicians who lashed out at the US president for sharing videos originally posted by a leader of a British far-right fringe group, in an unprecedented attack on Theresa May, Trump replied with what Reuters dubbed an “unrepentant message”:

“Theresa @theresamay, don’t focus on me, focus on the destructive Radical Islamic Terrorism that is taking place within the United Kingdom. We are doing just fine,” he tweeted.

.@Theresa_May, don’t focus on me, focus on the destructive Radical Islamic Terrorism that is taking place within the United Kingdom. We are doing just fine!

Trump truculent response prompted a new round of indignation and anger in Britain, where there have been several major Islamist militant attacks this year, with one minister describing Trump’s tweets as “alarming and despairing”. London’s Muslim mayor, Sadiq Khan, a Muslim, said May should withdraw an offer of a state visit to Britain which has already been extended.

President Trump has used Twitter to promote a vile, extremist group that exists solely to sow division and hatred in our country. It's increasingly clear that any official visit from President Trump to Britain would not be welcomed. https://t.co/rwJJ5saSAb pic.twitter.com/bus3kMWIfk

Trump provoked the initial wave of anger and disgust from politicians in Britain and human rights groups in the United States when he shared anti-Muslim videos posted by Jayda Fransen, deputy leader of the group Britain First. Fransen, who was convicted this month of abusing a Muslim woman and whose group wants to ban Islam, is facing further criminal charges of racially aggravated harassment. The videos shared by Trump purported to show a group of people who were Muslims beating a teenage boy to death, battering a boy on crutches and destroying a Christian statue.

May criticized him, her spokesman saying: “It is wrong for the president to have done this.” Shortly after, May told reporters in Amman, that “the fact that we work together does not mean that we’re afraid to say when we think the United States has got it wrong, and be very clear with them. And I‘m very clear that retweeting from Britain First was the wrong thing to do.”

Brendan Cox, the husband of lawmaker Jo Cox who was murdered in 2016 by a far-right extremist and Justin Welby, the spiritual head of the Anglican Church, were among those expressing outrage at Trump’s latest tweet.

Lawmakers from the across the political divide were also united in condemnation.

“By sharing it, he is either a racist, incompetent or unthinking, or all three,” opposition Labour lawmaker Stephen Doughty said. Britain’s Middle East minister Alistair Burt tweeted: “The White House tweets are both alarming and despairing tonight. This is so not where the world needs to go.”

The Dutch embassy in Washington issued a Twitter comment on one of them, which Fransen had described as showing a “Muslim migrant” beating up a boy. “@realDonald Trump Facts do matter. The perpetrator of the violent act in this video was born and raised in the Netherlands,” the embassy said. “He received and completed his sentence under Dutch law.”

May angered Trump’s many critics in Britain then by extending an invitation to make a state visit to Britain with all the pomp and pageantry it brings including a formal banquet with Queen Elizabeth. Despite repeated calls from opposition lawmakers to cancel this, Rudd said the invitation still stood although a timing had not been agreed. She also said the close U.S.-British relationship which allowed the intelligence agencies to share information was vital and had saved lives.