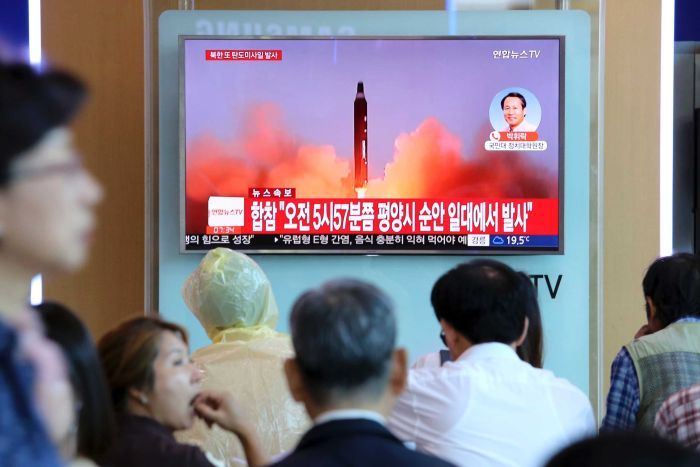 North Korea has fired a missile over northern Japan in a move Japanese Prime Minister Shinzo Abe called an “unprecedented” threat to his country.

The missile, launched early on Tuesday Korean time, flew over Hokkaido island before crashing into the sea.

The UN Security Council is expected to hold an emergency meeting in response.

North Korea has conducted a flurry of missile tests recently, but this is the first time it has fired what is thought to be a ballistic weapon over Japan.

On the two previous occasions its rockets crossed Japan – in 1998 and 2009 – North Korea said they were for satellite launch vehicles, not weapons.

The BBC’s Rupert Wingfield-Hayes in Tokyo says this latest launch appears to be the first of a missile powerful enough to potentially carry a nuclear warhead.

The South Korean military said the missile was fired eastward just before 06:00 local time (21:00 GMT) from near the North’s capital, Pyongyang – which is rare.

Early analysis of the launch suggests the missile:

No effort was made by Japan to shoot down the missile but it issued a safety warning telling citizens in Hokkaido to take shelter in “a sturdy building or basement”.

US and Japanese forces have just finished a joint drill in Hokkaido while another annual military exercise involving tens of thousands of South Korean and US soldiers is still under way in South Korea.

The North sees these regular military drills involving the US as highly provocative, perceiving them as a rehearsal for an invasion. 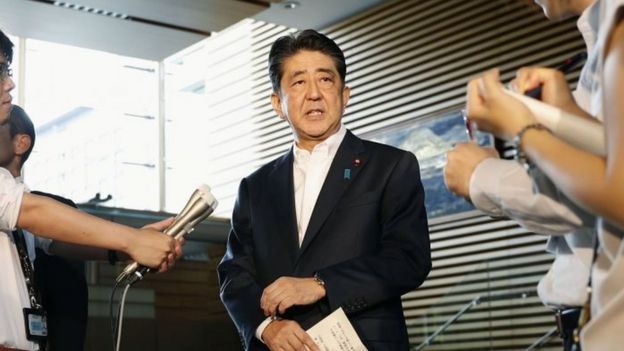 Mr Abe said he had spoken to US President Donald Trump and that both agreed to increase pressure on North Korea. The Pentagon meanwhile said the launch did not represent a threat to the US itself but that the military was working to gather more intelligence about it.

China warned that tensions on the Korean peninsula had reached a “tipping point” but said the US and South Korea were partly to blame. Foreign ministry spokeswoman Hua Chunying criticised the two countries for their repeated military drills putting pressure on the North.

“After so many rounds and vicious cycles, do they feel they are nearer to peaceful settlement of the issue?” he said, adding that pressure and sanctions would not solve the problem.

Russia’s Deputy Foreign Minister Sergei Ryabkov said the country was “extremely worried” about the “tendency towards an escalation” but also suggested the US-South Korean military exercises “played a role in provoking Pyongyang”.

This is by some measure North Korea’s most provocative missile test in a very long time, perhaps ever. Yes, there have been North Korean flights over Japan before, but this is the first time Pyongyang has fired an overtly military missile, with a potential nuclear capability, across Japan.

Early analysis suggests it was a Hwasong-12 missile, first seen at a huge military parade in Pyongyang in April. It was then successfully launched on a high trajectory flight into the sea in May.

Why has North Korea chosen to do this now? Firstly to demonstrate resolve. It shows the regime in Pyongyang is not intimidated by American threats and has not “backed down”, as President Trump suggested two weeks ago.

Secondly, Pyongyang needs to test its new missile on a more realistic trajectory. Thirdly, such a test puts a strain on the US-Japan relationship. It makes Japan feel extremely vulnerable and tests US resolve.

Mr Abe said North Korea’s “reckless action is an unprecedented, serious and a grave threat to our nation” which also “greatly damages regional peace and security”.

He said his government was doing its utmost to protect people’s lives. 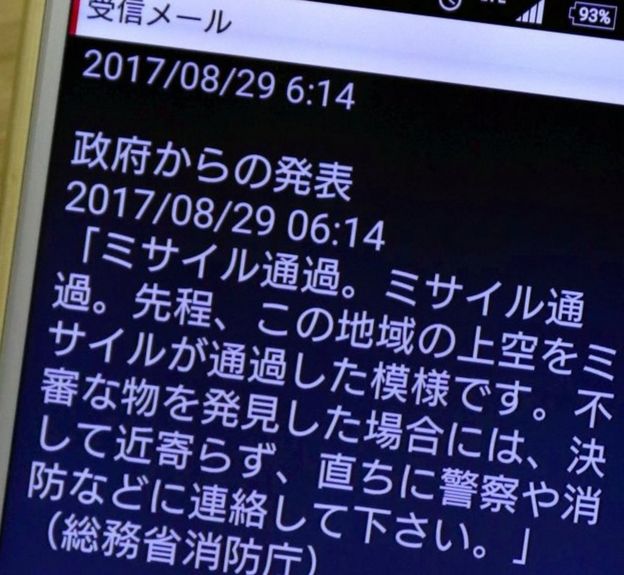 North Korea’s conventional and nuclear weapons programmes are a breach of international sanctions, so the test is being seen as a major provocation and an escalation of tensions on the Korean peninsula.

Earlier this month, North Korea threatened to fire missiles towards the US Pacific territory of Guam, while US President Donald Trump warned Pyongyang would face “fire and fury” if it continued to threaten the US.

There have also been some reports in recent months that North Korea is preparing to carry out its sixth nuclear test.

But last week, US Secretary of State Rex Tillerson said the fact that North Korea had not carried out any missile launches since the UN imposed a fresh round of sanctions was an indication of restraint by Pyongyang.