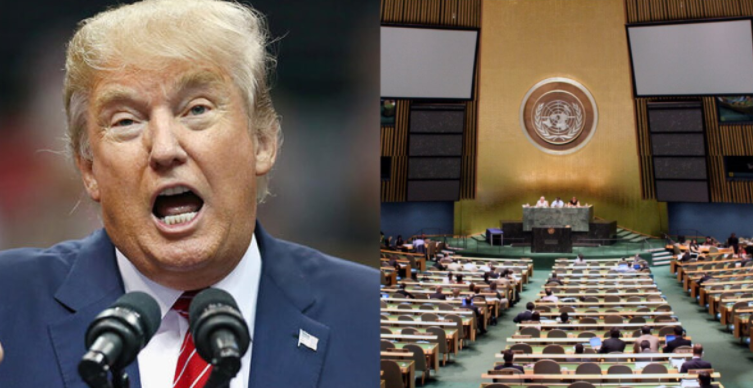 Obama’s open border policies delighted UN bureaucrats and his commitment to resettling unvetted refugees made him the darling of the United Nations.

Fast forward to today and a lot has changed. We’re out of the climate treaty, Obama’s anti-gun executive orders have been dismantled, refugees are no longer allowed into the country, and illegal aliens caught entering the country are being deported at a record pace.

The UN is furious. That is why they just released a 23-page report demanding that the United States cease and desist all imprisonment of captured illegal aliens and threatening to take the United States to court for violating human rights law.

One of the Obama policies that Trump did away with was catch-and-release at the border. When Border Patrol would catch an illegal alien crossing the border, they would take down their name and release them back into society with a court date. No surprise, more than 97% of those released never showed up to their court hearing. They just disappeared into American society.

Trump put a stop to that. He brought more immigration judges to the border, even putting some inside the Border Patrol jails, so that deportation hearings can be expedited. The United Nations doesn’t like this. Not one bit.

The United Nations Human Rights Council has now formally demanded that President Trump return to Obama’s catch-and-release policies. They are demanding that the United States go back to the old ways and make sure that illegal alien detentions are “in accordance with international human rights law.” What they mean is that detentions shouldn’t be happening at all…

Honestly, I can’t blame the UN. Hillary Clinton’s loss must have been a complete shock to them. They anticipated 4-8 more years of being able to walk all over the United States. Instead, they learned that their gravy train is over. They have every right to be upset.

In just two weeks, Congress will have to start voting on next year’s budgets. The fiscal year runs through the end of September.

The time to fight back against the UN is literally right now!

Force Congress to use the power of the purse! Send your instant FaxBlast and demand that Congress pass Ted Cruz’s bill to defund the United Nations!

Back in January, Ted Cruz introduced a bill to cut off the United Nation’s funding. Not only did RINO Lindsey Graham sign on as a co-sponsor, but Senate Minority Leader Chuck Schumer even said it may be necessary to curtail the UN’s anti-US and anti-Israel agenda.

Conservatives, RINOs, and even some Democrats are united on this.

Now it is up to you to force them to vote. Time after time, they make promises and then secretly work to make sure they never need to act on them.

Talk is cheap. You must demand action!

The time is now to force Congress to take action agains the UN! Send your instantaneous FaxBlast and DEMAND that Congress pass Ted Cruz’s bipartisan bill to defund the United Nations!