The age of entitlement: how wealth breeds narcissism

As people get richer, they are more likely to feel entitled, to exploit others, and to cheat. That extends to politics too

‘Wealth cultivates attitudes that are against redistribution and for privilege.’ Photograph: Aurora Photos/Alamy

Call it the asshole effect. That is the term coined by US psychologist Paul Piffafter he did some stunning new research into the effects of wealth and inequality on people’s attitudes.

As we ponder Joe Hockey’s budget and his division of the world into “leaners” and “lifters”, as we learn from Oxfam that the richest 1% of Australians now own the same wealth as the bottom 60%, we would do well to consider the implications of Piff’s studies. He found that as people grow wealthier, they are more likely to feel entitled, to become meaner and be more likely to exploit others, even to cheat. 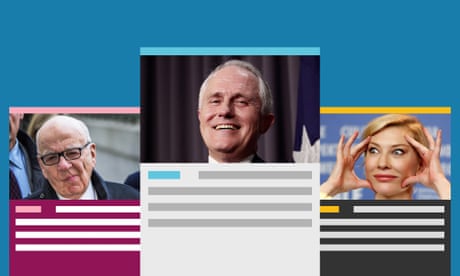 Piff conducted a series of revealing experiments. One was remarkably simple. Researchers positioned themselves at crossroads. They watched out for aggressive, selfish behaviour among drivers, and recorded the make and model of the car. Piff found drivers of expensive, high-status vehicles behave worse than those sputtering along in battered Toyota Corollas.

They were four times more likely to cut off drivers with lower status vehicles. As a pedestrian looking carefully left and right before using a crossing, you should pay attention to the kind of car bearing down on you. Drivers of high-status vehicles were three times as likely to fail to yield at pedestrian crossings. In contrast, all the drivers of the least expensive type of car gave way to pedestrians.

Fascinated by these results, Piff and his colleagues then looked at what created these impulses to bad behaviour. In their laboratory, the richest students were more likely to consider “stealing or benefiting from things to which they were not entitled” than those from a middle-class or lower-class background. Even people simply primed to feel rich helped themselves to more sweets meant for children in a lab next door than those primed to feel disadvantaged.

The reason, it turns out, is that even thoughts of being wealthy can create a feeling of increased entitlement — you start to feel superior to everyone else and thus more deserving: something at the centre of narcissism. They found this was true of people who were, in real life, better off. Wealthier people were more likely to agree with statements like “I honestly feel I’m just more deserving than other people” and place themselves higher on a self-assessed “class ladder” that indicated increasing levels of income, education and job prestige. This had straightforward and clearly measurable effects on behaviour.

For example, when told that they would have their photograph taken, well-off people were more likely to rush to the mirror to check themselves out and adjust their appearance. Asked to draw symbols, like circles, to represent how they saw themselves and others, more affluent people drew much larger circles for themselves and smaller ones for the rest of humankind. If you think of yourself as larger than life, larger and more important than other people, it is hardly surprising that your behaviour would become oriented towards getting what you think you deserve.

As Piff says, this goes way beyond the individual, to noxious social attitudes – like being punitive towards the poor while living the “because I’m worth it” lifestyle. As a society becomes wealthier, it can get more narcissistic, less empathetic and unwilling to look after the vulnerable. A majority of Republicans in a recent poll said they thought the poor in America had it easy. Greater feelings of entitlement might also lead to a tax revolt by the upper classes. It is the logic of “I’ve earned it”, “It’s mine”, and, “Why should I have to use my hard-earned cash for those inferior scroungers, the poor?”

Wealth cultivates attitudes that are against redistribution and for privilege, Piff said:

The more severe inequality becomes, the more entitled people may feel and less likely to share resources they become. The wealthier [that] segments of society become then, the more vulnerable communities may be to selfish tendencies and the less charity the least among us can expect.

This is just what happened with Joe Hockey’s budget. According to John Hewson, the disposable income of lower income and single income groups were cut by 12-15%, while those on higher incomes only suffered a temporary cut of less than 1%.

It would be reasonable to object here, and point to famous and inspiring examples of philanthropy by wealthy individuals like Bill Gates. Yet Piff found such generosity from the wealthy was by no means the norm. In another arresting and counterintuitive finding, he discovered the richer the meaner — despite having more to give, wealthier people were less likely to be generous and give to charity.

Well-off people were less likely to help a person who entered the laboratory in distress, unless they had just watched a video about child poverty. In a series of controlled experiments, lower-income people and those who identified themselves as being on a relatively low social rung were consistently more generous with limited goods than upper-class participants were.

Outside the lab, Piff found that the rich donated a smaller percentage of their wealth than poorer people. In 2011, the wealthiest Americans, those with earnings in the top 20%, contributed 1.3% of their income to charity, while those in the bottom 20% donated 3.2% of their income. The trend to meanness was worst in plush suburbs where everyone had a high income, and never laid eyes on a poor person. Insulation from people in need, Piff concluded, dampened charitable impulses.

Poorer people were also more likely to give to those charities servicing the genuinely needy. The rich gave to high-status institutions such as already well-endowed art galleries, museums and universities, while Feeding America, which deals with the nation’s poorest, got nothing.

These qualities are not set in concrete. “We’re not suggesting rich people are bad at all,” said Piff, “but rather that psychological effects of wealth have these natural effects.’ It is, he said, a function of greater prosperity, rather than innate qualities of rich people.

Piff found that when shown images of children in poverty, the wealthy could behave more empathetically. Like the long campaign for the NDIS, which sensitised people to the plight of those with a disability or those caring for them, people can respond to good political leadership which primes them for generosity rather than meanness.

However, as our society gets wealthier, we need to pay attention to his sober observation:

While having money doesn’t necessarily make anybody anything, the rich are way more likely to prioritise their own self-interests above the interests of other people. They are more likely to exhibit characteristics we would stereotypically associate with, say, assholes.

As inequality mounts and the policies entrenching it remain, as politicians are increasingly drawn from the top 10% or even 1%, we need to pay heed to this research.

The whole idea of “leaners” and “lifters” is the central teaching of the right wing ideologue, Ayn Rand, who penned books like The Virtue of Selfishness. It’s a self-serving crock. Rand found out the hard way. After a lifetime proselytising on behalf of the “producers” and denouncing anyone needing government assistance as “parasites,” when Rand became old and sick, she discovered that even a bestselling author could not afford health care in the neoliberal US. She availed herself of Medicare and ended her life on what she had despised – social security. Maybe Joe Hockey will learn in old age that leaning comes to all of us.