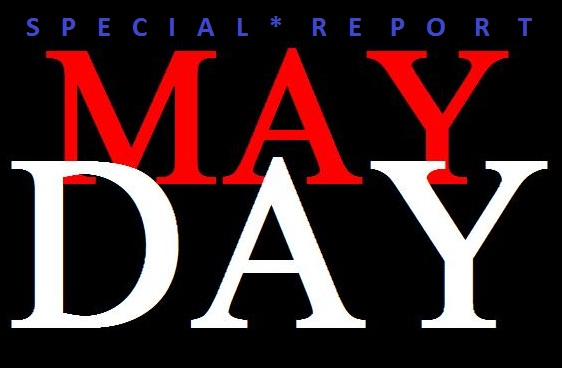 Special Report:  Is an American Coup d’état in Progress? The Deep State Conducts a Purple Revolution Against the Trump Administration

There is now a full-scale clandestine revolutionary war being waged against the Trump Administration.  The C.I.A. usually attempts a soft coup first at the direction of its masters in Deep State. When that’s not successful in effectuating a regime change, they know the territory has been sufficiently softened up for the hot phase of the revolution.

In these United States of America, that revolution is known as the ongoing but rapidly intensifying Purple Revolution.  This seditious revolution began the very day that President Trump won the election on November 8, 2016, if not before.

• Deep State will not permit President Trump to govern as POTUS.

• Deep State uses the C.I.A. and the Mainstream Media (MSM) to run interference at every turn against the Trump Administration

These preceding bullet points constitute the current NWO globalist agenda being implemented throughout the USA in direct opposition to the Trump Administration.  In other words, when Assistant to the President and White House Chief Strategist Steve Bannon said that the Mainstream Media (MSM) had morphed into the opposition party, he was speaking literally.

A Counter Declaration of War on the Mainstream Media

There you have it (see preceding link), the whole world is now witnessing an all-out war between the MSM and a sitting POTUS.  This unparalleled conflict is not only being fought between the Mainstream Media and the Trump Administration, it’s occurring throughout the entire body politic of the USA and beyond.

The U.S. citizenry saw as never before the complete lack of integrity exhibited by the MSM during the entire 2016 election cycle.  Candidate Trump exposed the lying media and avalanche of fake news with his every news conference and campaign stop.  In so doing, the whole world is now aware that the MSM can never — EVER — be trusted again.

Because the MSM is the primary mouthpiece of Deep State, a highly consequential decision was made by its concealed leadership to remove Trump from power with great haste and recklessness lest their Global Control Matrix experience an unprecedented collapse.  Deep State knows full well that it’s now in its death throes.  And that such grave existential threats must be faced before its entire superstructure (and infrastructure) falls into it own footprint.

This 21st century “War of the Titans” has gotten so hot, in fact, that there is now no turning back for either side.  IT WILL BE A FIGHT TO THE DEATH.

Because the Mainstream Media has been outed like never, the most likely outcome is that it will simply be shut down.  The public domain is now replete with hard evidence proving treason and sedition perpetrated over many decades by the MSM.  Once the American people have reviewed the relevant proof of high treason and crimes against humanity, it will only be a matter of MSM industrywide criminal prosecution.

Bear in mind that Deep State cannot function to any reasonable degree without total ownership and efficient functioning of the media.  The C.I.A., as well as the other 16 US intelligence agencies, all require the media cover staunchly provided by the MSM.  So does the Military-Industrial Complex, as does the much larger Government-Corporate Complex.  Therefore, when the MSM finally crashes and burns, so will all of the other major entities which comprise the Deep State.

With this critical understanding it ought to be quite obvious that the next 120 days are pivotal for Deep State.  Every single day that the Trump Administration is able to consolidate and increase its power, Deep State loses its influence throughout the US government and the world-at-large.  Such a crucial attenuation of power will serve as the death knell of the Deep State within the American Republic.

Hence, there is now a great race against time … for both sides of this epic war.  The agents of Deep State clearly hope that a soft coup will be successful through a presidential impeachment or by other means. The C.I.A. recently executed such a strategy to ‘peacefully’ remove Dilma Rousseff, the 36th President of Brazil.

Make no mistake about it, if a soft coup is not successful, the agents of Deep State will commence the hot phase of their Purple Revolution.  Everything points to a massive May Day stealth event.  An unrivaled National Mall rally in D.C. attended by the many misguided groups which make up the Democratic Party is already in the works.

An enormous May Day protest could be used to manufacture a context in which a Maidan type event takes place (remember the violent uprising in Kiev, Ukraine).  The Illuminati are notorious for using dates and numerology by which to stage their revolutions and civil wars over centuries (e.g. May Day parades and terror events). Just as the engineered uprising in Kiev was surreptitiously utilized to force Ukrainian President Viktor Yanukovych into exile, a similar trigger point could be fabricated by which the Bolshevik Left goes really crazy and tries to chase Trump from the White House.

With their de facto leader Barack Obama leading the Purple Revolution quietly from behind, many Democratic factions have been adequately brainwashed by his unmatched cult of personality.  The ultra-liberals, extreme left-wingers, fake progressives and DINOs (Democrats in name only) have all demonstrated that they will resort to violence — both verbal and physical — whenever necessary.  Hence, a real May Day event, no matter when it is scheduled must be met with an overwhelming display of support for President Trump.

Much more importantly, perhaps the single most effective way of responding to a subversive May Day plot is to pre-empt it.  The Trump Movement might need to mobilize like never before and converge on Washington, D.C. with a show of support and unity and numbers as never seen before in U.S. history.  Such an impressive and incomparable show of public support might be all that’s needed to quell the brewing Democrat insurgency.  It will also serve to put the cowardly liberals in their proper place, especially those hidden manipulators who are stoking the flames of insurrection.

A Civil War, a Second American Revolution or Both

Some are calling this ongoing soft coup a prelude to a full-blown civil war; others refer to it as the Second American Revolution against the tyrannical U.S. Federal Government that was purposefully created by the Obama and Bush administrations since September 11th, 2001.

There is no question that the present phase of hostilities was initiated by the Soros-Obama-Clinton faction which essentially represents the seditious face of Deep State.  Deep State is the monolithic and all-pervasive rubric under which the globalist New World Agenda is being executed worldwide—24/7.

Key Point: Deep State is no respecter of national sovereignty; nor does it have any loyalty to any principle or people except globalization and the homogenization of populations across the planet.  It’s primary goal is a New World Order overseen by a One World Government (OWG) which the agents of Deep State (DS) aim to foist on the world community of nations.

Given their fatally flawed agenda, it’s obvious that the United States of America is an essential cog in their machine.  As the military arm of the New World Order, the USA is absolutely necessary to the black operations and running of Deep State; otherwise, DS is but a paper tiger.  Hence, such an OWG harebrained scheme can only be accomplished with the total commitment of the U.S. Armed Forces.  Which is why there is now both a revolution and civil war evolving on parallel tracks at the same time in real time.

As a matter of fact, the Soros-funded, Obama-led, Clinton-inaugurated civil war (also known as the Purple Revolution) is being instigated to short-circuit the authentic rebellion of We the People against Deep State and its horrific creation known as the Obamanation.  This is an extremely important point [in brackets] which must be understood by every American patriots.  [There is a HUGE difference between the seditious Purple Revolution against the nation and the We the People revolution against Deep State.]  <—Again, This is a VERY IMPORTANT POINT

We the People have been sufficiently forewarned.

The Purple Revolution has been completely exposed as the treasonous enterprise that it truly is.

May Day has been predicted as a defining moment of the subversive the Purple Revolution led by Obama, Clinton and Soros.

Deep State has been revealed as a treacherous and dangerous global entity which can only exist with a perpetual war economy established planetwide.

With these realizations, it is imperative that We the People respond quickly and appropriately to these looming threats and dire eventualities.

Between now and the next installment in this series, every patriot ought to contemplate their unique role in this ongoing Second American Revolution.  There is no way out of this epochal conflict; We the People must pass through it with an indomitable spirit and unwavering resolve.

And President Donald J. Trump must proceed with all deliberate speed to really “Make America Great Again”.  His secret formula for accomplishing this noble endeavor: The 3 Pillars of Deep State Must Be Knocked Down Post Haste

The following exposé explains how the Purple Revolution is being staffed as well as its direct connection to Pizzagate.  This critical piece of their plan must be understood by the patriots so that they know what they are really dealing with.
The Critical Connection Between Pizzagate and the Purple Revolution

For those who question the all-out war between the Trump Administration and the MSM, the video and article below ought to erase all doubt.