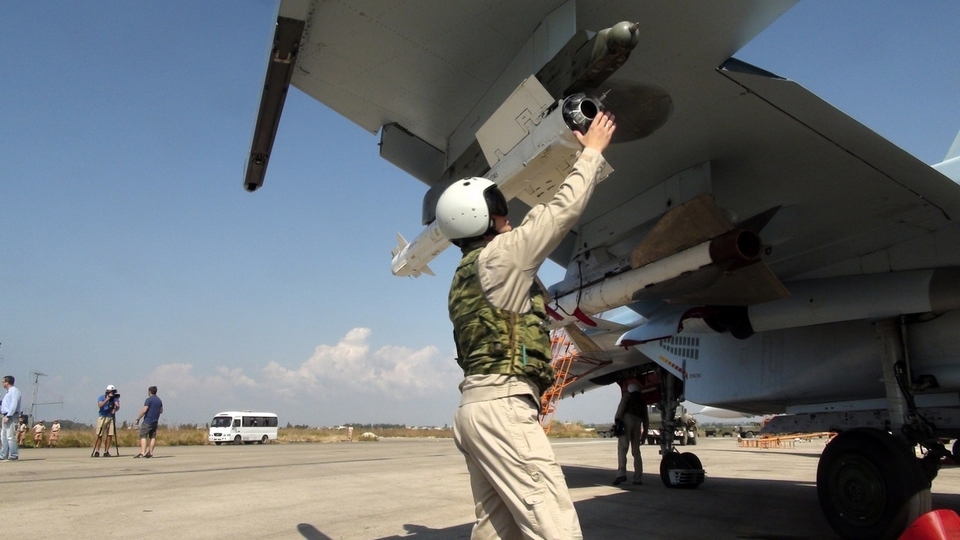 A Russian pilot checks an air-to-air missile on his Su-30 jet fighter before taking off at Hmeimim airbase in Syria, Oct. 5, 2015. AP

MOSCOW — Russian officials accused the U.S. on Thursday of siding with “terrorists” in Syria, in a sign of escalating tensions between Moscow and Washington amid the battle for the northern Syrian city of Aleppo.

U.S. State Department spokesman John Kirby’s warning that the collapse of U.S.-Russian cooperation in Syria could lead to a rise in extremism and potential attacks against Russia drew Moscow’s anger.

The Russian Foreign and Defense Ministries both cast it as U.S. encouragement of terror attacks on Russia.

“We can’t assess those statements as anything else but a call, a directive for action,” Foreign Ministry spokeswoman Maria Zakharova said at a briefing.

Defense Ministry spokesman Maj. Gen. Igor Konashenkov said Kirby’s statement amounted to “the most frank confession by the U.S. side so far that the whole ‘opposition’ ostensibly fighting a ‘civil war’ in Syria is a U.S.-controlled international terrorist alliance.”

“What makes Kirby’s statement particularly shocking is that the scale of direct U.S. influence on terrorists’ activity is global and reaches as far as Russia,” he said.

The remarks by Russian officials have shown a degree of mistrust and strain between Moscow and Washington after the collapse of the U.S.-Russia-brokered truce and the Syrianarmy onslaught on Aleppo backed by Russian warplanes. The growing friction makes it increasingly unlikely that the cease-fire could be revived.

U.S. Secretary of State John Kerry said Thursday that Washington is “on the verge” of ending Syria talks with Moscow because of days of deadly bombings of Aleppo by Russian and Syrian planes.

Kirby, asked Wednesday what the consequences would be for Russia if cooperation with the U.S. in Syria collapsed, said “that extremists and extremists groups will continue to exploit the vacuums that are there … which will include, no question, attacks against Russian interests, perhaps even Russian cities, and Russia will continue to send troops home in body bags.”

Konashenkov interpreted Kirby’s statement as a direct threat to the Russian military in Syria. He said Russia remains open for dialogue with Washington on Syria, but added that the U.S. needs to “exclude even a hint at threatening our military and Russian citizens.”

Russian President Vladimir Putin’s spokesman, Dmitry Peskov, said Thursday that Moscow still wants to cooperate with Washington on the Syrian crisis, but blamed the U.S. for a failure to deliver on its pledge under the Sept. 9 agreement to encourage moderate opposition to sever ties with al-Qaida’s branch in Syria.

“Our colleagues from Washington have tried to cover up their inability to fulfill their own obligations with verbal attacks on Russia,” he said.

Russia on Friday is marking the one year since it launched its air campaign in Syria in support of Syrian President Bashar Assad. In light of that, the Russian Foreign Ministry issued a warning to Russians abroad about possible “provocations,” urging them to exercise caution.

The diplomatic tension follows Kerry’s warning that the U.S. will stop coordinating with Moscow unless Russian and Syrian attacks on Aleppo end.

Deputy Foreign Minister Sergei Ryabkov was quoted by Russian news agencies as saying of the U.S. that “a certain emotional breakdown occurred.”

He also reiterated Russia’s stance that a seven-day pause in the Aleppo offensive would give militant groups time to regroup.