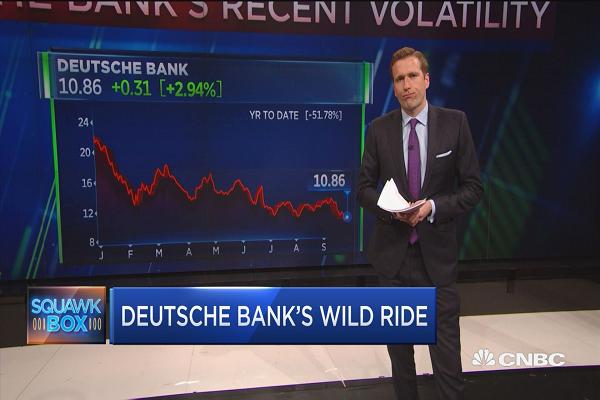 German officials could be about to find themselves in an uncomfortable position: Being called on to show they’re ready to rescue a bank in a part of the world where such operations are considered taboo.

Deutsche Bank came under intensified market fire Thursday, the latest salvo being a Bloomberg report that a small number of hedge funds are trimming their sails at the German bank.

In a broad perspective, the move would represent a minor dent in Deutsche’s derivatives clearing business. Barry Bausano, chairman of Deutsche’s hedge fund business, told CNBC on Thursday that while there have been some outflows, there have also been inflows, which he said is “part of the typical ebbs and flows” of the prime brokerage business.

But at a time when investors are fearing what the future holds for the highly leveraged institution, such news is enough to cause ripples. Shares tumbled more than 7 percent in mid-afternoon trading. The plunge took the broader market down as well.

Consequently, market talk intensified that it’s becoming time for the German government step in and assure investors that it will be at the ready to stabilize both Deutsche and the broader system — much along the lines of what U.S. officials had to do during the 2008 financial crisis.

“They’re going to probably have to say that they would be willing to put funds into the bank,” said banking analyst Christopher Whalen, senior managing director and head of research at Kroll Bond Rating Agency. “It’s exactly like what (former Treasury Secretary Henry) Paulson did with Citi … It’s a very analogous situation. Hopefully, the German government will take a page from that particular book and look at how the U.S. responded.”

In a statement, Deutsche Bank pointed out that it is financially stable: “Our trading clients are amongst the world’s most sophisticated investors. We are confident that the vast majority of them have a full understanding of our stable financial position, the current macro-economic environment, the litigation process in the U.S. and the progress we are making with our strategy”

As Citigroup teetered in late-2008 and early-2009, Paulson’s Treasury stepped in with two cash injections to keep the financial contagion from spreading after Lehman Brothers failed on Sept. 15, 2008. The highly unpopular bailouts kept Citi afloat as fear spread about further implosions in the financial system.

However, the European corporate culture is different, particularly when it comes to banking. Bailouts are considered anathema, and German officials in recent days have signaled an unwillingness to step in.

“The Germans have to stop talking about this publicly unless they say, ‘Yep, we got ’em, there is no issue here,'” Whalen said. “The concern is that the statements they did make were not helpful.”

The situation conjured dark images of the 2008 financial crisis — with the important caveat that the overall risks are nowhere near as great now as they were then.

“After being there I am literally sitting here with chills coming down my spine because we’re in a very similar dynamic,” Larry McDonald, head of global strategy at ACG Analytics, said on CNBC’s “Power Lunch.” “Deutsche Bank is not Lehman in terms of the overall global risk, but the political situation is almost identical.”

In the meantime, market angst builds.

Millennium Partners, Capula Investment Management and Rokos Capital Management are among the 10 hedge funds that have pulled cash and cut positions at Deutsche, according to the Bloomberg report, which noted that most of the 200 firms that conduct derivatives clearing with Deutsche have not altered their positions. Rokos declined comment to CNBC and the other firms did not respond to requests.

Bloomberg cited a company statement in which the bank expressed confidence that most of its clients understand the path Deutsche is taking toward resolving its issues. The bank is in the midst of negotiating a settlement with the U.S. Justice Department over mortgage-backed securities. Reports indicate a figure of $14 billion is on the table, which would hit Deutsche hard.

The bank has about about $16 billion in equity and some $160 billion in debt.

“The thing that people forget is the EU has very, very strict rules on the book. The whole thing is no state assistance,” Kroll’s Whalen said. “The Germans have let this situation with banks fester for years, and unfortunately the guys at Deutsche have waited to settle their outstanding issues. They’ve always been this way.”

—CNBC’s Wilfred Frost and Patrick Allen contributed to this report.