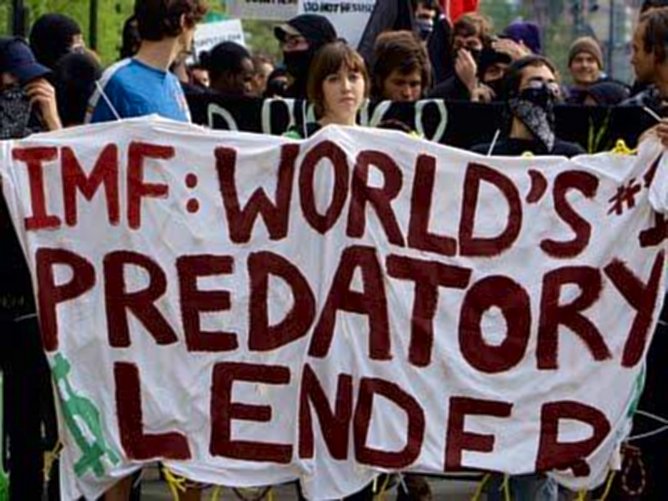 One of the recurring concerns involving Europe’s seemingly perpetual economic, financial and social crises, is that these have been largely predetermined, “scripted” and deliberate acts.

This is something the former head of the Bank of England admitted one month ago when Mervyn King said that Europe’s economic depression “is the result of “deliberate” policy choices made by EU elites.  It is also what AIG Banque strategist Bernard Connolly said back in 2008 when laying out “What Europe Wants”

This morning we got another confirmation of how supernational organizations “plan” European crises in advance to further their goals, when Wikileaks published the transcript of a teleconference that took place on March 19, 2016 between the top two IMF officials in charge of managing the Greek debt crisis – Poul Thomsen, the head of the IMF’s European Department, and Delia Velkouleskou, the IMF Mission Chief for Greece.

In the transcript, the IMF staffers are caught on tape planning to tell Germany the organization would abandon the troika if the IMF and the commission fail to reach an agreement on Greek debt relief.

More to the point, the IMF officials say that a threat of an imminent financial catastropheas the Guardian puts it, is needed to force other players into accepting its measures such as cutting Greek pensions and working conditions, or as Bloomberg puts it, “considering a plan to cause a credit event in Greece and destabilize Europe.”

According to the leaked conversation, the IMF – which has been pushing for a debt haircut for Greece ever since last August’s 3rd Greek bailout – believes a credit event as only thing that could trigger a Greek deal; the “event” is hinted as taking place some time around the June 23 Brexit referendum.

The leaked transcript reveals how the IMF plans to use Greece as a pawn in its ongoing negotiation with Germany’s chancelleor in order to achieve the desired Greek debt reduction which Germany has been pointedly against: in the leak we learn about the intention of IMF to threaten German Chancellor Angela Merkel to force her to accept the IMF’s demands at a critical point.

THOMSEN: Well, I don’t know. But this is… I think about it differently. What is going to bring it all to a decision point? In the past there has been only one time when the decision has been made and then that was when they were about to run out of money seriously and to default. Right?

THOMSEN: And possibly this is what is going to happen again. In that case,it drags on until July, and clearly the Europeans are not going to have any discussions for a month before the Brexits and so, at some stage they will want to take a break and then they want to  start again after the European referendum.

THOMSEN: That is one possibility. Another possibility is one that I thought would have happened already and I am surprised that it has not happened, is that, because of the refugee situation, they take a decision… that they want to come to a conclusion. Ok? And the Germans raise the issue of the management… and basically we at that time say “Look, you Mrs. Merkel you face a question, you have to think about what is more costly: to go ahead without the IMF, would the Bundestag say ‘The IMF is not on board’? or to pick the debt relief that we think that Greece needs in order to keep us on board?” Right? That is really the issue.

VELKOULESKOU: I agree that we need an event, but I don’t know what that will be. But I think Dijsselbloem is trying not to generate an event, but to jump start this discussion somehow on debt, that essentially is about us being on board or not at the end of the day.

The IMF is also shown as continuing to pull the strings of the Greek government which has so far refused to compromise on any major reforms, as has been the case since the first bailout.

As the Guardian notes, Greek finance minister Euclid Tsakalotos has accused the IMF of imposing draconian measures, including on pension reform. The transcript quotes Velculescu as saying: “What is interesting though is that [Greece] did give in … they did give a little bit on both the income tax reform and on the … both on the tax credit and the supplementary pensions”. Thomsen’s view was that the Greeks “are not even getting close [to coming] around to accept our views”. Velculescu argued that “if [the Greek government] get pressured enough, they would … But they don’t have any incentive and they know that the commission is willing to compromise, so that is the problem.”

Below is Paul Mason’s summary of what is shaping up as the next political scandal.

The International Monetary Fund has been caught, red handed, plotting to stage a “credit event” that forces Greece to the edge of bankruptcy, using the pretext of the Brexit referendum.

No, this is not the plot of the next Bond movie. It is the transcript of a teleconference between the IMF’s chief negotiator, Poul Thomsen and Delia Velculescu, head of the IMF mission to Greece.

Released by Wikileaks, the discussion took place in Athens just before the IMF walked out of talks aimed at giving Greece the green light for the next stage of its bailout.

The situation is: the IMF does not believe the numbers being used by both Greece and Europe to do the next stage of the deal. It does not want to take part in the bailout. Meanwhile the EU cannot do the deal without the IMF because the German parliament won’t allow it.

Let me decode. An “event” is a financial crisis bringing Greece close to default. Just like last year, when the banks closed, millions of people faced economic and psychological catastrophe.

Only this time, the IMF wants to inflict that catastrophe on a nation holding tens of thousands of refugees and tasked with one of the most complex and legally dubious international border policing missions in modern history.

The Greek government is furious: “we are not going to let the IMF play with fire,” a source told me.

But the issue is out of Greek hands. In the end, as Thomsen hints in the transcript, only the European Commission and above all the German government can decide to honour the terms of the deal it did to bail Greece out last July.

The transcript, though received with fury and incredulity in Greece, will drop like a bombshell into the Commission and the ECB. It is they who are holding E300bn+ of Greek debt. It is the whole of Europe, in other words, that the IMF is conspiring to hit with the shock doctrine.

The Greeks are understandably angry and confused; As Bloomberg reported earlier, “Greece wants to know whether WikiLeaks report regarding IMF anticipating a Greek default at about the time of the U.K. June 23 referendum on its EU membership is the fund’s official position” government spokeswoman Olga Gerovasili says Saturday in e-mailed statement.  For its part, an IMF spokesman in e-mail Saturday said it doesn’t “comment on leaks or supposed reports of internal discussions.”

1. has a “Snowden” leaker now emerged at the IMF; if so we can expect many more such bombshell accounts in the coming weeks; or perhaps the reason for the leak is less nuanced: a bugged hotel.

Acc to #IMF leak, conf call was held March 19, when Velculescu was still in Athens, Hilton Hotel. Makes you wonder if Hilton is bugged.

2. it may be another turbulent summer in Europe.