Exactly how did the perpetrators of OPERATION DEEP FREEZE attempt to do that—disempower Texans across the state?

Secondly, every Texan needs to take an even closer look at this highly coordinated energy price-gouging scheme.

For this is how many people will be deliberately driven into bankruptcy by the highly organized criminal conspiracy hatched by the NWO globalist cabal—an exceedingly dangerous international crime syndicate that’s not content with just shutting down the state and paralyzing the people.  As follows:

See how the NWO globalists are stealthily pushing countless Texans into
bankruptcy via an unparalleled predatory energy price-gouging scheme
right in the middle of the worst manmade disaster in state history!

Here’s how the rapacious price gougers have been able to rapidly accrue an unrivaled amount of unconscionable enrichment at the expense of the incapacitated rate payers.

Among [those price-gouged] is Susan Hosford of Denison, Texas. On a typical February day, she pays Griddy less than $2.50 for power. But the one-day cost spiked to hundreds of dollars after the storm. In all, she was automatically charged $1,346.17 for the first two weeks of February, which was more than she had in her checking account, causing her bank to charge her overdraft fees and affect other bills.

Now, just imagine having your checking account debited for a $12,000 by your utility company in the middle of the “Ice Storm of the Century”? 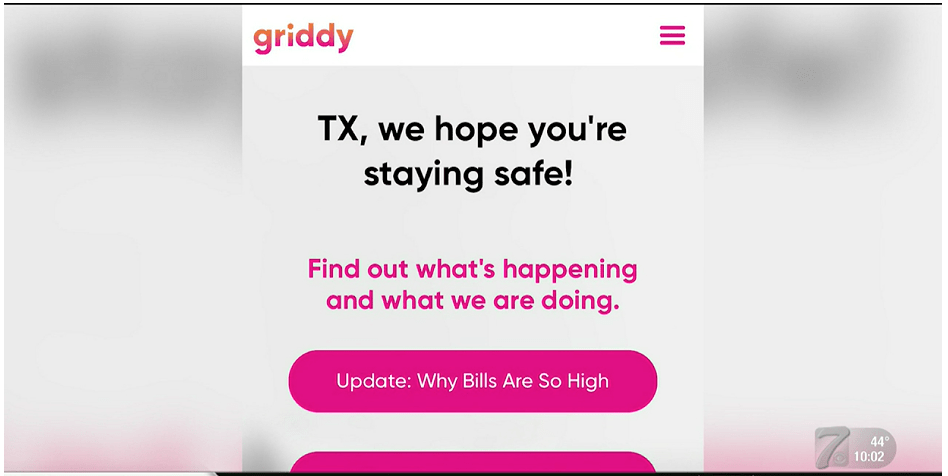 Is the highly exploitative and predatory power company in Texas named Griddy or Greedy?!?!

Remember, many folks have no water, their power was interrupted by rolling blackouts, many gas stations are food stores are still closed, many pets are literally frozen solid, and the kids are crying because it’s so cold and they’re hungry because the kitchen appliances wouldn’t turn on.  And then the utility company empties your checking account, so there’s no money on your debit card needed to face the current exigencies and upcoming emergencies. 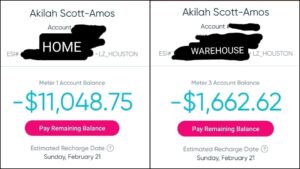 ‘People turn off their power because they can’t afford it,’ Texas woman slapped with $11,000 electricity bill tells RT

OPERATION DEEP FREEZE was meticulously designed to take down the entire state of Texas for a protracted period of time (read: Biden’s 4-years  term), which it will quite likely do to varying degrees depending on the local ice storm damage.

In the wake of the catastrophic series of geoterrorists attacks across the state this February, every single resident was also targeted economically and financially as seen by the myriad consequences of TEXAGEDDON.

Not only are countless folks living throughout the Four Corners of Texas completely incapacitated in some way, shape or form, many are soon to be totally broke, busted and disgusted by the incredibly sinister energy price-gouging scam engineered by the ENRON-like swindlers.

That highly predatory plot to bankrupt the people of Texas is actually a complex criminal conspiracy that directly involves the Biden administration: Biden’s Acting United States Secretary of Energy caused the Texas energy crisis and power grid disaster ON PURPOSE!!!

Bottom Line: AS THE NWO GLOBALISTS DEVASTATE TEXAS WITH WEAPONIZED WEATHER, TEXANS MUST FIGHT BACK WITH A MUCH MORE POWERFUL WEAPON

[1] Why are so many Texans getting electricity price-gouged?