“President Trump Must Take Out ALL Traitors With One Strike” 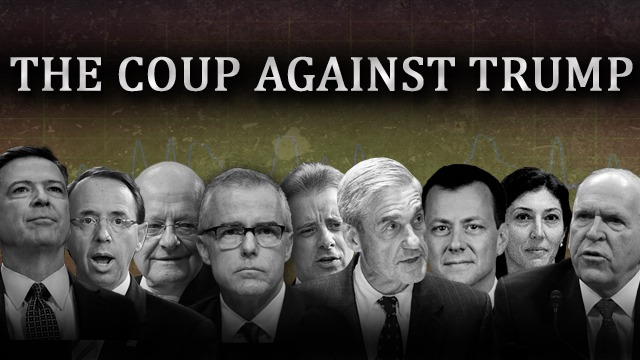 “President Trump Must Take Out ALL Traitors With One Strike”

“The POTUS is facing the “presidential decision of the Millennium”.  The fate of the American Republic hangs in the balance.  The election thieves will not be thwarted in this naked steal.  They don’t care that much more than half of America knows Biden outright stole it.  The globalists own and operate all the relevant institutions including the entire US Intel Community.  The seditious Mainstream Media is functioning as the CIA’s Mockingbird Media it was set up for.  So Trump will have one, AND ONLY ONE, shot at it before January 20th.  He needs to cut off the head. “

“That means all the ringleaders of the Democrat-run coup, the Deep State-coordinated election theft and the Globalist-overseen color revolution must be rounded up and GITMOed.  Everyone — the Obamas, Clintons, Bidens, Harris, Soros, Gates, Brennan, Clapper, Hayden, Comey, Mueller, Weissmann, Pelosi, Schumer, Schiff, Cuomo, Newsom, de Blasio, Schmidt, Zucker, Dorsey, Zuckerberg, Fauci, Birx, Redfield, etc. must all be apprehended post-haste.  The arrests must take place well before Inauguration Day.  These traitors will NOT let President Trump occupy the White House after that.  They will not, under any circumstances, submit to any type of prosecution.  And, they’re determined to prosecute Trump for their own crimes against the Republic.”

“Given this reality, Team Trump is between a rock and a hard place…with NO wiggle room whatsoever.  Only a perfectly timed surgical strike will work.  There will be no second chance.  Trump also needs to signal to the Patriot Movement his urgent requirement for total armed support.  Every gun-owning patriot needs to arm up and show up.  Ten million locked and loaded Patriots surrounding Washington, D.C. is the only thing the Left understands.  Another armed-to-the-hilt 90 million can surround the statehouses.  That way the Intel Community will think twice about POTUSnapping or assassinating or incapacitating President Trump.  This is very serious stuff.  And it requires extremely serious timing!  Because if the Right fails to prevent Biden from entering the Oval Office, getting these communist perps out of their positions of power and influence will be very difficult without a full-scale civil war.”  (See: If the U.S. Supreme Court enables the Democrat’s election theft, Civil War II is inevitable!)

What could possibly be added to this critical analysis?!?!

In any event, it’s of paramount importance for the Right to understand just how prepared the Left is to carry out a full-blown communist takeover of the country.  Given the extreme desperation and unparalleled recklessness demonstrated by the 2020 election theft, there’s absolutely nothing holding them back.  At this point the subversive Democrats believe they have absolutely nothing to lose and everything to gain, which is why the following two exposés are more essential to understand than ever.

Because of the massive nationwide election fraud, the ranks of the Right have swelled considerably during 2020.  Independents have left the Democrat reservation forever as have many liberals with a conscience.  Because the political center has migrated significantly to the Right, there is now a vast majority of Americans who want this slow-motion communist revolution extinguished for good.

Clearly, President Trump has a sufficient number of Patriots and Nationalists behind him to snuff out this rebellion once and for all.  However, he needs to know that for sure.  Every one of his major nation-saving initiatives henceforth will require an unprecedented show of strength (and brute force when necessary).  The incorrigible cabal of criminally insane psychopaths squatting inside the Beltway only knows hard power, only understands brute force and will only react appropriately to the threat of highly consequential violence.

Why does Trump only get “one strike”?

Because once the traitorous perps understand they’re
being hunted, they will start their own hunt in earnest
and not stop until they have killed their prey, that’s why!

So it’s high time to arm up folks.  It falls upon the Right to take back the USA from those who have stolen it.  Only a critical mass of We the People can do this successfully and expeditiously.

~ May God Bless the America ~

There’s only one way forward for the United States of America.  The Democrat Party must be dissolved immediately for the good of the Republic.  The Mainstream Media must be shut down or completely taken over with all deliberate speed.  ALL operations within the U.S. Intelligence Community must be suspended with the FBI and C.I.A. terminated asap. The existing DoJ must also be closed down.  The IRS needs to be shuttered and the Federal Reserve rolled under Treasury.  Similarly, Big Social Media needs to be promptly nationalized and restructured, as does most of Big Tech.  The Senior Executive Service must be terminated and all SES employees fired so that a big piece of Deep State disappears overnight.  The tremendous stranglehold of the New World Order globalist cabal on the U.S. Federal Government is a different story.  What can be done now is that all contracts with British-owned SERCO need to be cancelled—YESTERDAY!  As for the rest of the foreign enemies and criminal co-conspirators who have surreptitiously infiltrated the US Government and Corporate America, that will take time to search and destroy them.  Nevertheless, each and every one of these daunting tasks must be carried out with complete success if there’s any hope of getting our country back.  Semper Fi!