Imposter Joe Biden Must Be Arrested, Prosecuted and Incarcerated for the Good of the Republic 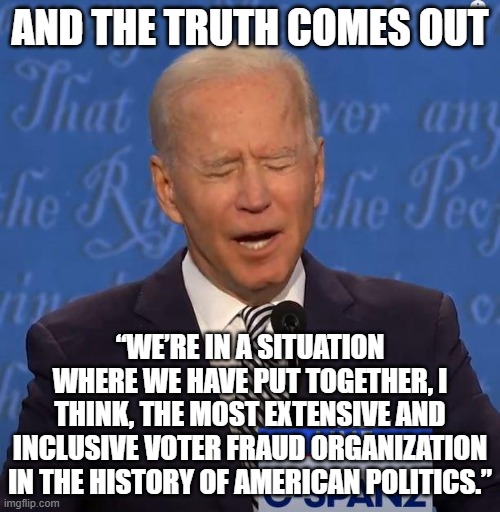 Not only did Biden steal the election, he admitted it!

Imposter Joe Biden Must Be Arrested, Prosecuted and Incarcerated for the Good of the Republic

“As head of the Democrat Party, career political criminal Joe Biden is the primary perpetrator of the greatest vote fraud and election theft in U.S. history.  Incarceration, not the inauguration, of Biden is the only acceptable outcome of the 2020 POTUS election.  Likewise, the Democrat Party must be dissolved for the good of the country.  As the figurehead of what is essentially a RICO-level criminal organization, Biden’s best chance to avoid capital punishment would be to identify all of his fellow communists who are planning the total overthrow of the American Republic.  Many of them have already been implicated by their treacherous collusion with the Chinese Communist Party.  Co-conspirator Kamala Harris must also be held accountable for this highly consequential election theft that included spohisticated cyber-crimes.  Only when these two communist stooges are singing like canaries can President Trump eradicate the countless coup plotters, dangerous traitors, and enemy turncoats among US.”

*SOTN Editor’s Note: Many of Biden’s apologists defend him by saying he knew nothing of the massive vote fraud that was carried out specifically in the six to eight primary battleground states.  The hard evidence clearly proves that this unparalleled fraud was perpetrated by the Democrat Party of which Biden is the head.  And, since this election theft has been vigorously covered up by the Democrat Party and DNC, Biden is directly responsible for this ongoing cover-up just as he is also culpable for the actual election crimes committed under his thoroughly corrupt leadership.

The United States of America is facing the gravest constitutional crisis since the Civil War.  If this election debacle is not justly and swiftly resolved, it will devolve into a Second Civil War.

This Democrat-run international crime syndicate closely collaborated with some of America’s most scheming enemies.  The Deep States of the United Kingdom, Communist China and Israel also colluded with the Democrat Party as did many international NGOs that operate under the rubric of the New World Order globalist cabal.

The sheer depth and breadth of this vast criminal conspiracy to steal the POTUS election can only be gauged by the number of globalist institutions and international organizations that participated in this ongoing crime wave washing over the USA.

For example, the entire mainstream media — WORLDWIDE — has proved to be a pivotal co-conspirator in both the commission of the myriad election crime sprees as well as in the conduct of the highly coordinated cover-up.  In point of fact, without such an effective cover-up, such a transparent election theft could never have been successful thus far.

TRUMP HAS WON BY DEFAULT

It’s critical for every American to know that because of the profound degree of criminality associated with this election theft, President Trump has already won by default.

Consider the following irrefutable conclusion that is actually the product of settled law which was ruled on by the U.S. Supreme Court.

(Source: TRUMP HAS WON BY DEFAULT—Here’s why!

The very basis of this final and lawful result of the 2020 election is that “FRAUD VITIATES EVERYTHING”.

In other words once the Biden-Harris ticket engaged in a premeditated and systematic pattern of fraud to steal the election nationwide, they immediately forfeited any claim to a victory.  As follows:

“Fraud vitiates everything.”  That enduring opinion was the crux of the landmark decision handed down by the U.S. Supreme Court in the above referenced case of the United States versus Throckmorton.

Ipso facto, the outcome of a POTUS election that is rife with one-sided fraud and criminality is rendered null and void.  Especially any result which saw the winner attain his or her victory through fraudulent means and/or criminal conduct is automatically canceled and invalid under the law.

The same U.S. Supreme Court ruling also determined that fraud vitiates contracts.  An election is essentially a binding contract between the electorate and the elected.  This indispensable social contract is irreparably broken through voter fraud and election cyber-crimes as the public trust is profoundly violated.

The transparent Democrat-directed election theft of 2020 has rent asunder the sacred covenant between the elected and the electors.  Hence, Joe Biden’s illicitly declared victory is illegitimate and therefore annulled forthwith.

The Biden-Harris ticket has also forfeited any right to a recount or a re-run of the election because of their highly organized and premeditated fraud perpetrated to outright steal it.  Remember, fraud vitiates everything.

As more details of this unprecedented vote fraud and election theft are brought to light, the Tump-Pence ticket appears to have won by a landslide.  The fraudulent Biden wins in the battleground states were actually stolen from Trump, so the result is reversed but by much more than the bogus vote tallies indicate.

President Trump is, therefore, the victor of the 2020 POTUS election by default…by law…and according to the U.S. Constitution.  By every indication, his electoral triumph was sealed by the will of a great majority of the American people.

Which means the President now enjoys a HUGE mandate to not only govern in an unobstructed manner, but also to expeditiously implement his urgent MAGA agenda.

(Source: Let’s be very clear about the 2020 election outcome: “FRAUD VITIATES EVERYTHING”.)

In view of these unassailable truths and incontestable facts, Joe Biden and Kamala Harris lost the election by acting fraudulently and calculatedly covering up the fraud.  Therefore, President Trump won by default and soon by the electoral vote.

To permit these two proven criminals — Biden and Harris — anywhere near the Executive Branch of the U.S. Federal Government would be nothing less than an abysmal abomination before God.

In fact, the Right has a patriotic duty, a moral right, the constitutional authority and full legal justification to prevent Joe Biden from being inaugurated.  It is because a naked imposter like Joe Biden is attempting to usurp the U.S. presidency that the Founding Fathers wrote the Second Amendment— the sacred and God-given right to bear arms.

Which is why, where it concerns this utterly reckless, incomparably brazen and extraordinarily desperate election heist of the millennium, Biden cannot be inaugurated

However, it’s up to the Right to do what is right by standing up for righteousness as never before. The NWO globalists own and operate so much of the US government, as well as control so much institutional power throughout the nation, that only the Patriot Movement can fix this.

In the present context, the first challenge to be met is to prohibit election thief Joe Biden from ever entering the White House.  Same goes for his partner-in-crime Kamal Harris.  Once they get in power, it will be more difficult to frogmarch them out and into Gitmo.

Some commentators have even recommended that this be accomplished by the sheer force of armed patriots showing up en masse in Washington, D.C. during the weekend before Inauguration Day.

Lastly, there are those brave patriots who are calling for many more than just Team Biden to be apprehended and imprisoned with all deliberate speed. See: The American people will now arrest all the traitors who are complicit in stealing the election.

Bottom Line: Joe Biden is an unindicted criminal by his own admission.  Hence, he had no right or standing to run for POTUS in the first place.  The Democrat Party not only failed to properly vet Biden, they nominated a candidate whose “high crimes and misdemeanors” easily rise to the level of impeachable offenses.

Editor’s Note: No matter how one looks at this tremendously sordid plot to steal President Trump’s massive mandate, Joe and Kamala are in HUGE trouble with you know who.
See: MEMO to Joe & Kamala from OH HIGH