Another Manchurian Candidate
Groomed as a “Female Obama” 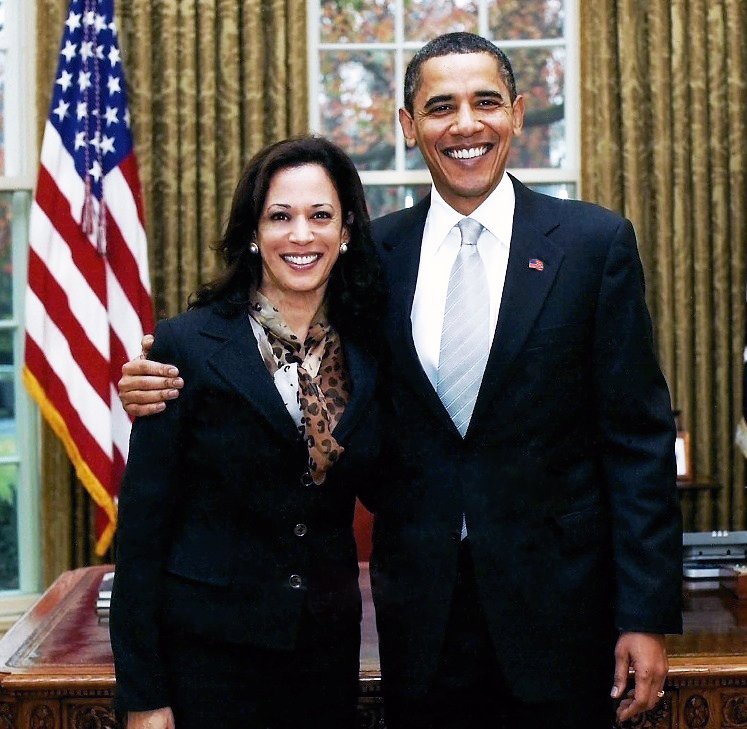 Make no mistake about it, Kamala Harris was born and bred, socially engineered and mind-control programmed to function as a Manchurian Candidate and female Obama.

In point of fact, just like Barack Hussein Obama, she is not even a U.S. citizen.

Just like Obama, Kamala Harris is not a U.S. citizen

As a matter of historical fact, Kamala Harris was not even eligible to run for POTUS as she did during the 2020 election cycle since she is clearly does not meet the criteria of the U.S. Constitution’s “natural-born-citizen clause”.

Biden’s VP will become POTUS if he wins

Democrat POTUS nominee Joe Biden has spent months floating one black woman after another as his VP pick knowing all along his choice was ORDERED by his hidden masters to be Sen. Kamala Harris of California.

The strategy was to put off any official announcement as long as possible in order to subject Harris to as little vetting as possible.  This scheme was quite similar to the total lack of vetting of Obama in 2008 who never even presented a valid birth certificate. See: Scientific Evidence: Obama Birth Certificate Copy Proven Fake And Forged

The 2020 campaign season has been the most intense and competitive in American electoral history so Harris was sure to elicit more scrutiny than any previous VPOTUS candidate in 230 plus years.

Of course, the reason for this extraordinary inquiry into Harris’s background is because she will become President should Biden successfully steal his way to a victory.  The only reason why the DNC permitted a Biden nomination was so he could justifiably be replaced with Kamala Harris.  As follows:

Candidate Biden has already proven himself to be totally unfit and profoundly debilitated to occupy the Oval Office.  Everyone knows this, which means that upon his compelled resignation or obvious incapacitation Harris would become the first female POTUS.

Why was Harris really selected for this most difficult of tasks—challenging Trump and becoming the future prez in the Covid era?

Kamala Harris is not only Hillary Clinton on Super Steroids…
… Sen. Harris is also the ‘Chosen One’ as she was created to be a “female Obama” 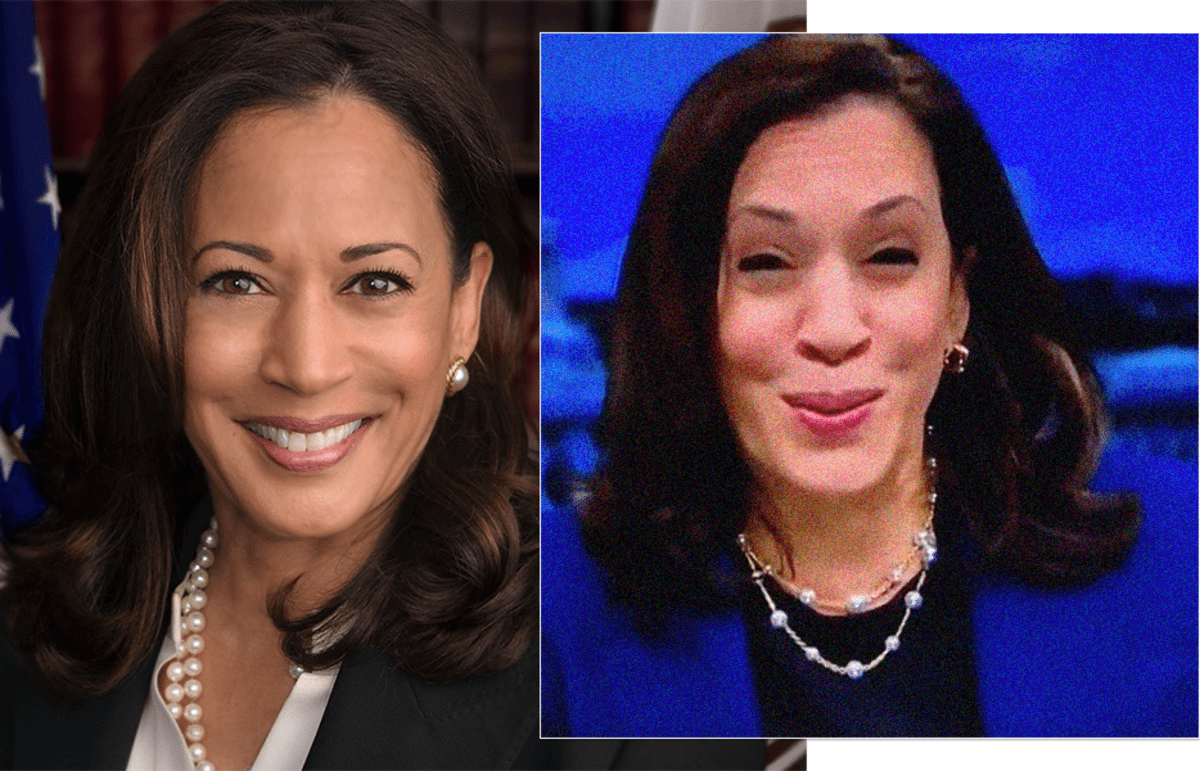 The most astute political analysts knew instantly after Harris first presented herself publicly post face-lift that she was Biden’s first choice.  For example: Did Kamala Harris just have a face lift in anticipation of being named Biden’s running mate?

This was no ordinary face-lift, incidentally; it was a major overhaul whereby some folks no longer recognized her as the U.S. Senator from California.  Apparently her handlers felt that she needed to appeal to a specific voting demographic and that the lift would help out.  Now the body politic knows how utterly incompetent the Democrat campaign consultants are!

On the other hand, some election analysts have wondered out loud whether the new Harris is actually a double (and communist Manchurian Candidate) who was quickly pushed onto the public stage at a critical moment of the nomination process. See: Is this person a doppelgänger for one of California’s U.S senators?! (Video)

This suspiciously timed face-lift has justifiably got the Right into all sorts of speculation about the current identity of Harris.  Given the obvious use of doppelgängers for Hillary Clinton, it’s clear that the Democrats will not hesitate to insert an impersonator into the VP slot in order to carry out their nefarious communist agenda.  What better way to do just that than to slip in the clone simultaneously with her so-called face-lift?!

It’s also true that the original Kamala Harris developed a reputation as the meanest, rudest, ugliest politico inside the Beltway.  Many commentators have even suggested that there’s no other politician in the Washington, D.C. firmament who is as reckless and brash, shameless and without conscience as this California hitman.  And that includes Hillary Clinton as long as the Clinton body count is today!

Without a doubt, the primary reason why the globalists want Harris installed in the White House is to zealously foment the race war that Obama started the day he took office.

As senator, Harris did her level best to instigate a race war through her prominent participation in the very cunning and covert Operation Crafty Beaver. 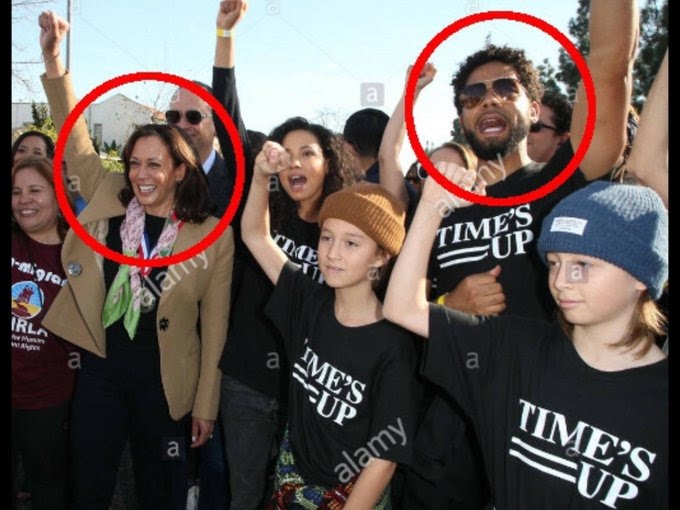 Just take a close look at the preceding photograph of criminal crisis actor Jussie Smollett and Senator Harris just prior to Smollett’s arrest for faking a hate crime.

How many U.S senators would ever put themselves in such a compromising position unless she, too, played an integral role in the black operation to trigger a nationwide race war…which eventually did occur after the staged murder of George Floyd.

It’s also important to point out that SMOLLETTgate Scandal Goes Way Beyond Kamala Harris and Right Up to Obama.

Not only that, but also that Harris is also intimately caught up in the ongoing BORDERgate. See: Why does Kamala Harris promote human trafficking across the border?

But perhaps the greatest telltale sign of her corruption and treachery is that Kamala Harris took money from the firm behind Jeffrey Epstein plea deal.

KEY POINT: There is no more vitriolic and vituperative a race-baiting flamethrower than Kamala Harris.  She’s unrivalled in this particular department and why she is the chosen one.  The Democrats, therefore, will use any and every means of deception and duplicity to plant her in the West Wing; for her radical political persona is central to the ongoing communist plot to collapse the United States of America.  In other words, Harris will gladly provide the necessary cover for the Democrats planned race war to tear apart this nation. See: “IT’S A FULL-BLOWN COMMUNIST PLOT” — Whistleblower Reveals the Plan

Every investigators and analysts really understood that the Obama birth certificate (BC) controversy was fabricated with extremely purposeful design.  The DNC knew exactly that Obama’s birth certificate and citizenship documents were not legit.  The Democrats colluded with Deep State to intentionally implemented this psychological operation as a means of cynically mocking the Right every single day for 8 long years.  In fact, every conservative who reasonably questions Obama’s BC is pejoratively labelled a “birther”.

By efficiently carrying out this psyop, the perps were able to keep the GOP on the defensive.  Rather than confront the BC issue head on with the transparent truth, Republicans everywhere were silenced.  Collectively, they were cowed and then corralled into a pen of compliance which did not question Obama’s authenticity.  The perps even gave Obama a fake Social Security Number to add insult to injury.

The Democrat strategy of forcing the Republicans to never investigate Obama (with the exception of the ever-courageous Sheriff Joe Arpaio) allowed him to get away with bloody murder and worse over his two catastrophic terms.

The crucial point here is that the highly deceitful Democrats will attempt to use the exact same stratagem with a Kamala Harris presidency if Biden wins.  Her background is every bit as clouded and confusing for the very same reasons as Obama’s was.  Because of the serious problems with her citizenship, she could never withstand the opposition research that would be conducted in the Trump era.  Hence, the scheme to install her as POTUS by first electing Biden.

By the way, that’s just one piece of the “Joe Biden-Kamala Harris Criminal Conspiracy”.  Willfully subverting the U.S. Constitution in this manner is a capital crime.  When the ultimate objective is to dissolve the American Republic in order to transfer sovereignty to the United Nations, that’s a far more serious transgression.

Truly, Kamala Harris is “The poster politician for all swamp creatures.”

For anyone who doubts just how dangerous Harris would be as POTUS, the following video presentation makes it all too clear and vivid and downright scary.

The Worst of Kamala Harris (Video)

Every Patriot ought to disseminate this video far and wide so that folks everywhere can see how perilous a Harris presidency would be.  Perilous not only for the American Republic but especially precarious for the entire Patriot Movement (see the stunning Harris quote below made this year). 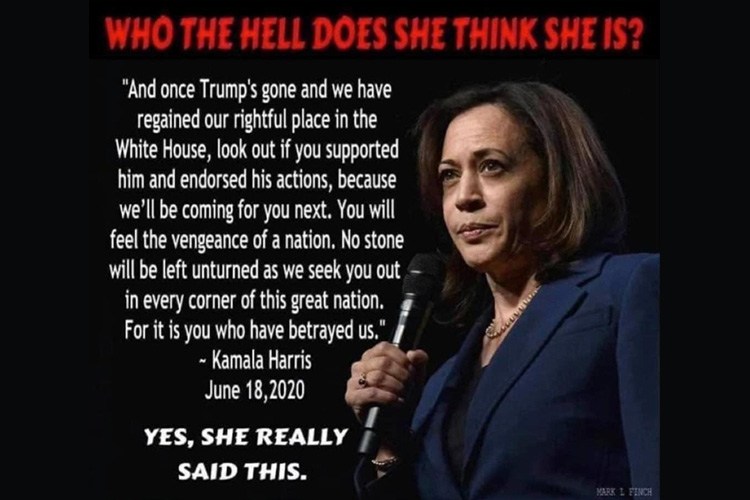 The Patriots at AMERICAN INTELLIGENCE MEDIA have created an impressive “Kamala Harris” media kit that can be circulated as is, or sent out piecemeal appropriately to each different audience.  Here’s the link for everyone’s use: https://aim4truth.org/2020/08/11/biden-picks-kamala-harris-as-vp-nominee/