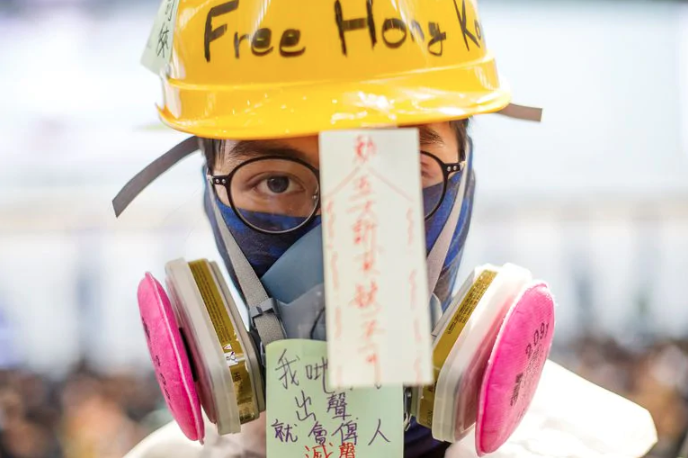 In a move that investors hope will calm the incessant protests that have brought Hong Kong’s economy to a standstill over the past four months, Chief Executive Carrie Lam and her top advisors are holding an emergency meeting to impose a ban on wearing masks in public.

Lam will hold a meeting of the executive council, her de facto cabinet, to impose the ban as soon as Friday, SCMP reports.

The ban will function under a tough colonial-era emergency law. The hope is that it will end the demonstrations, which have devolved into skirmishes between protesters and Hong Kong police. As demonstrators disrupted China’s ‘National Day’ on Tuesday, HK police were forced to fire six live rounds, one of which struck a teenage protester who was later arrested. Police arrested nearly 270 protesters that day.

Per the SCMP, the colonial-era Emergency Regulations Ordinance, first introduced in 1922, grants Lam the authority to “make any regulations whatsoever which he [or she] may consider desirable in the public interest” in case of “emergency or public danger.” It’s pretty clear that the protests now constitute a ‘public danger’, as Beijing has alleged for months now.

Hong Kong stocks rallied on the news, reversing an earlier decline as traders continue to grapple with some disappointing economic data. The Hang Seng Index rallied as much as 0.6%, after earlier falling as much as 0.9%.

As one analyst told BBG, the anti-mask law gives investors hope that the protests might end soon.

“The anti-mask law at least gives investors some hope that it could be a way to cool down the protests,” said Steven Leung, executive director at Uob Kay Hian. “Some protesters might think twice if they can be identified during protests. That’s why we see local shares rallying, such as developers and retailers.”

SCMP’s source said the violence on Tuesday made passing the anti-mask law an urgent issue.

“We cannot wait for the Legislative Council, which will only meet on October 16 at the earliest,” he said.

During an appearance on a Thursday radio program, Executive Council member Ronny Tong Ka-wah said that if he had a choice, he would choose to invoke the emergency mask law over imposing a curfew. The mask law doesn’t impact people who aren’t participating in the protests, he said.

But will the protesters obey? Or will they continue to don their masks in an act of defiance?