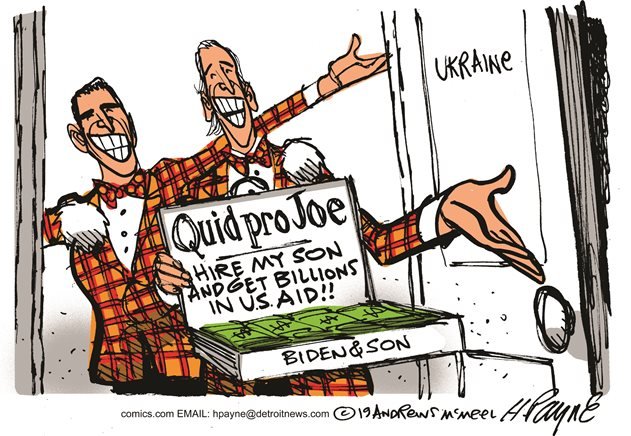 After a week of non-stop “bombshell” leaks about the Democrats’ impeachment probe into President Trump, which is supposedly trying to determine whether Trump pressured the newly elected Ukrainian President to push for investigations into Joe and Hunter Biden and their ties to a domestic gas company, the media is now being forced to confront another uncomfortable reality: That Ukrainian prosecutors appear to be finally moving ahead with a review of an investigation into a Biden-linked gas company, even after the alleged “quid pro quo” had been taken off the table.

Barely 12 hours after President Trump “recommended” that Ukraine and China start looking into the Bidens, WSJ reports that Ukraine’s general prosecutor’s office is reviewing investigations into a gas company that once paid Hunter Biden $50,000 a month to sit on its board.

Though Democrats have continued to insist that it’s Trump, not Biden, who is truly guilty of corruption, the vice president doesn’t sound too comfortable with all of this new scrutiny. During an appearance in Nevada last night, Biden insisted that Trump won’t “destroy me” or “my family,” and accused the president of using “dirty tricks”.

If prosecutors decide to reopen the probe, that would be the clearest sign yet that the Bidens might get caught up in an investigation – vindicating President Trump’s efforts.

The investigations, which were closed in 2016, weren’t focused on Hunter Biden specifically.

Instead, investigators were looking into “tax irregularities” at Burisma Group, the private gas company in Ukraine that had hired Hunter to sit on its board. Investigators were also reportedly looking into allegations of money-laundering and illegal-enrichment tied to the company’s owner, Mykola Zlochevsky.

Zlochevsky was never charged in the investigation, and his lawyer said at the time that the cases were closed due to lack of evidence, and that Zlochevsky was cleared of wrongdoing.

Of course, these conclusions are now being reexamined, even after Zelensky affirmed during a joint press conference that he wouldn’t pursue investigations simply because that’s what President Trump wanted.