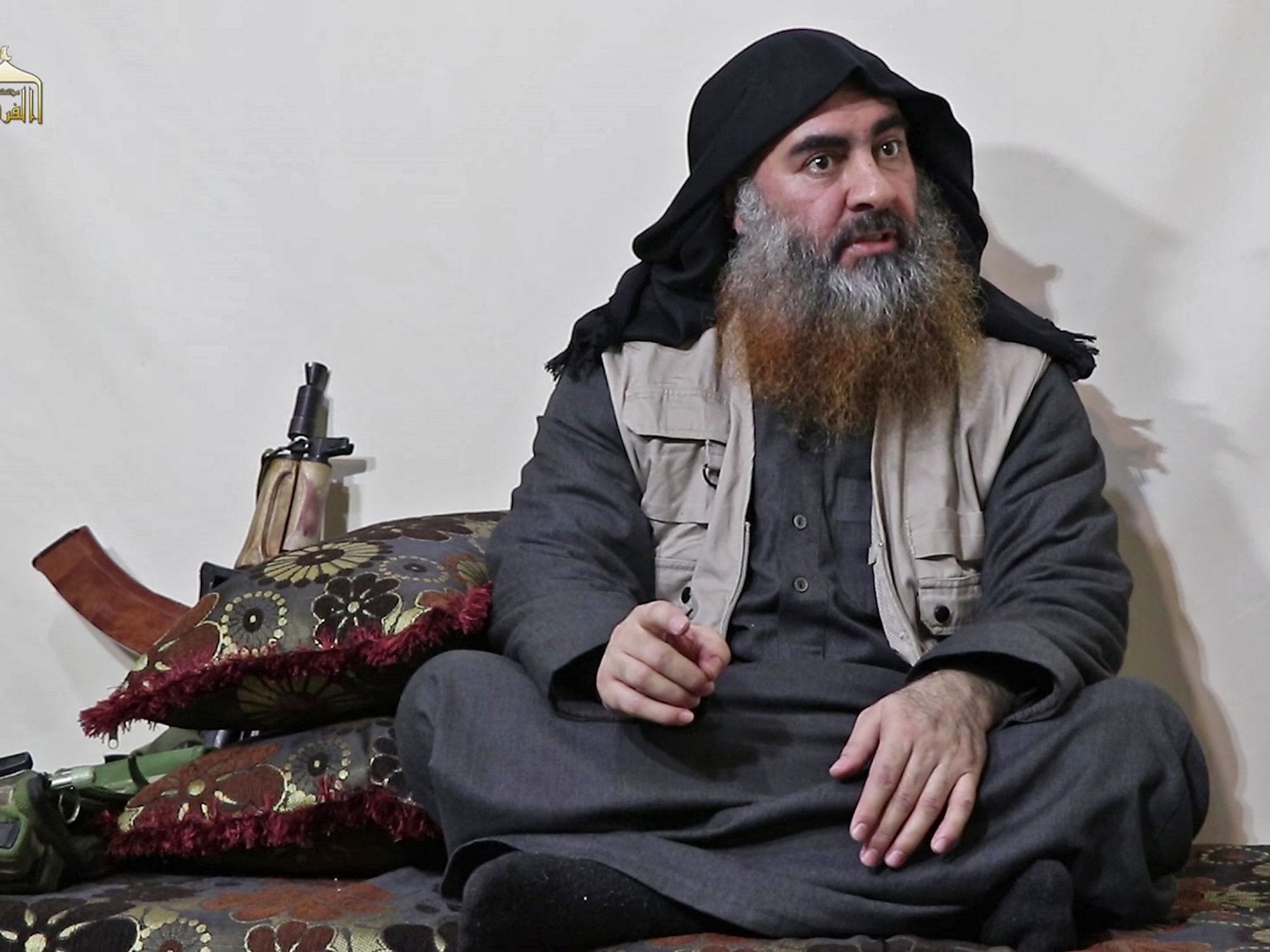 Exclusive: Russia says Bagdadi killing faked by US, part of new move against the region by Deep State

Russian intelligence inside Syria reported that their S400 radar systems which cover Idlib saw no American aircraft over the area where the Baghdadi raid was claimed.

The Daily Beast: The Kurds Spotted Baghdadi. The U.S. Abandoned Them Anyway [absolute bullshit — this is the Zionist story line along with save the oil]

Russia: Trump’s Baghdadi Victory Lap Is Nothing But ‘Propaganda’

‘We heard bullets, we didn’t know what was going on’: Terrified witnesses describe moment US troops stormed Baghdadi compound

ROBERT STEELE: I am reminded of the fake Bin Laden gifted to Barack Obama and Leon Panetta — US Special Forces were sent to their deaths for political theater, the real Bin Laden having died in 2001 and a series of fakes rolled out by CIA — the last one was a purely Pakistani product. In this instance I believe our President has been lied to and a mix of CIA and Pentagon traitors set the President up. While there may be DNA kits that work in real time the normal DNA test takes 24-72 hours; I absolutely do not believe a body was dug out; and I absolutely do not believe Bagdadi was crying and whimpering. This all sounds like bullshit from a juvenile mind in Covert Act Staff lacking in adult supervision. ISIS was created by CIA with the Mossad and Saudi Arabia. All indications are that the President is being manipulated and his new National Security Advisor is not up to the task for protecting the President from inter-agency lies. I cannot help but emphasize that the CIA and the Pentagon and the FBI have all been covering up 9/11, in which Dick Cheney and Donald Rumsfeld were the principal US traitors. I am stunned — just as the President is about to triumph with the FISA indictments, upgraded to criminal and including possibly the murder of Seth Rich, he goes and puts this crap on the table? This is a very disappointing turn of events. When the truth comes out, as it inevitably will, the President is going to take a huge credibility hit.

UPDATE 1: Additional information suggests that this was faked at the behest of Israel with the pleading support of Jared Kushner speculatively assumed. President Trump gave it away when he focused on “securing the oil.” The President has been lied to and manipulated.

Memoranda for the President on 9/11: Time for False Flag Deep State Truth! UPDATE 19: Israel Did It with Cheney & Mueller [New Book Indicts FBI In Detail]

What is totally mind boggling is how the fakestream media and the Dems are focusing on how badly Trump is treating the Kurds, “America’s allies,” but yet…..the majority of Americans can’t understand that ISIS was an Obama / CIA transformation of al Qaida…..the Deep State’s army of terrorists used to destroy the Middle East, INCLUDING the Kurds in their attempt to proclaim ancient land and further divide Iraq.

Phi Beta Iota: The same individual, an alleged Zionist intelligence and covert operations was allegedly killed in 2014 and 2016. He was used to mislead Senator John McCain, who along with Senator Lindsey Graham has been known to be under blackmail control of the Zionists as well as the CIA.

State of the Nation: Did Deep State forget that ISIS leader Abu Bakr al-Baghdad died in an Israeli hospital in 2015?

Below is temporary (Zionist refutation) pending original being online again.

Here is what Gordon Duff has provided me, VT original hacked from his site.

Alert Reader sends in a quote and a comment:

QUOTE: “Al-Baghdadi escaped to a tunnel dug under his hideout and took three of his young children. He was chased by the dogs and when he reached the dead end the terrorist detonated the suicide vest he was wearing. The IS leader and his children died on site, Trump confirmed, saying the body of the notorious militant “was mutilated”, but the tests allowed to identify him.”

COMMENT: Sounds eerily similar to OBL cowering/shielding behind his wife who took one bullet but then survived, while this one slaughtered his own issue [emotional appeal of disgust], but again his body was either too gory [OBL] to show or too “mutilated” to put together for anything recognizable. How fitting its all happens underground tunnels; no witnesses. So, what’s the upcoming story line of his disposal? another Islamic proper ‘burial at sea’ [non-existent nor customary]? Or would phantom kin claim this jihadist for final rest at family plot? Also who’d claim the $25,000,000 bounty…?

UPDATE 3: US-Israel-ISIS are one — and stealing Syrian oil

In Norways largest newspaper VG we got photos from the place AL-Baghdadi was raided, but sorry, its all FAKE. Google earth is NOT updated daily, but on G.E the house is already a ruin, but several things is “missing.

Link to google earth and the location

Phi Beta Iota: This reeks of a Zionist reverse false flag — did not happen. Our President has been lied to and then made it worse with exaggeration and hyperpole. We can understand the potential political value, but the truth about ISIS as a CIA-Mossad operation, the proof of US and Israel stealing Syrian oil, the Russian MOD declaration of the raid as fake, all add up and make the President look bad. Just as he is about to triumph on FISA, he devalues his political currency with lies? Not cool at all.

UPDATE 5: President furious over being lied to, orders release of video

ROBERT STEELE: It took less than fifteen minutes for Gordon Duff, an extremely well-connected individual in the region, to blow up the fake raid story. The President now realizes he has been lied to and made it worse with his exaggerations. Now he is talking about releasing the video, which will certainly be a simulation video, and Fox is going “all in” with platitudes from General Jack Keane, who has never met a piece of shit he cannot smell and declare to be prime beef. This story is CRAP. It diminishes the Presidency and makes it clear the National Security Advisor is naive and ineffective at protecting the President. Yes, a video exists. Yes, a patsy dies in the video. No, the raid did not take place where they say it did; it did not produce the result they say it did; and strategically, it is now a political liability. When are DoD and CIA going to restore their integrity?

To be clear, I continue to believe that President Donald Trump is the greatest possible thing that could have happened toward our shared goal of #MAGA, and I continue to believe that there are White Hats in DoD and CIA — and in the US Army and US Navy particularly — who are priceless to our restored future. Having said that — and having great hopes for the President’s political, legal, economic, and cultural triumphs over the next six years — I continue to be dismayed by the chicken-shit nature of White House, GOP, and campaign operations, that seem to mix bad theater with complete disregard for women, blacks, Latinos, students, and the elderly as well as the working class which is NOT DOING WELL. The President means well but his staff sucks and he is “out of balance” and out of touch with the pressure points that the rest of us see so clearly.

If I Were President

Steele on Books — America Love It or Lose It!

Everything we are being taught and told is generally a lie, if not an outright lie then a partial lie. Bill Casey told Ronald Reagan in February 1981 this: “We’ll know our disinformation program is complete when everything the American public believes is false.”

CIA — and the City of London, Wall Street, UK elite, and Zionists behind CIA — have almost succeeded in destroying America the Beautiful. One person and one person only stands between the total destruction of the USA and our resurrection: President Donald Trump.

Donate below, get email to start conversation.

Phi Beta Iota: The low-level Iranian functionaries blew this one, forgetting that they themselves had previously outed Baghdadi as Israeli citizen and Mossad operative Samuel Elliiott; that Elliot was known to have died (a second time) in an Israeli hospital in 2015; and that their trusted Russian allies with very sophisticated radar records have said officially that the raid did not happen. We are increasingly skeptical of Zero Hedge‘s ability to challenge official narratives, particularly when there is a Zionist aspect to the story.