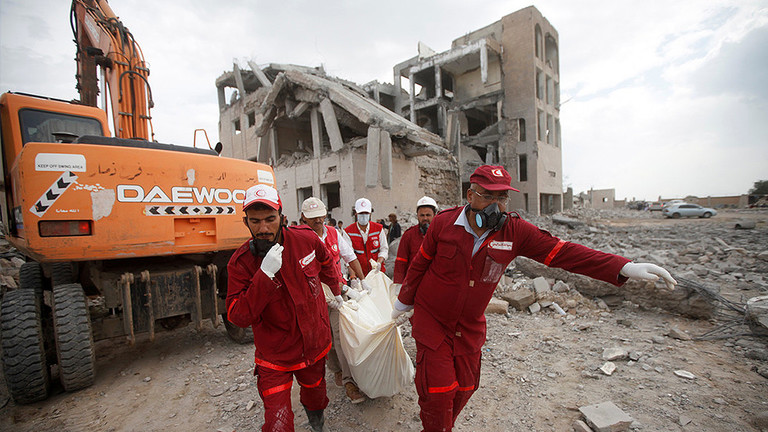 UN calls out US, UK & France for complicity in Yemen war crimes (GRAPHIC)

The UN Human Rights Council slammed the US, UK and France for their complicity in alleged war crimes in Yemen by the Saudi-led coalition, warning that abetting such crimes by selling arms or other aid is also illegal.

“States that knowingly aid or assist parties to the conflict in Yemen in the commission of violations would be responsible for complicity in the relevant international humanitarian law violations,” the UNHRC’s Group of Eminent International and Regional Experts on Yemen declared in a lengthy report published on Tuesday.

With the number of public reports alleging and often establishing serious violations of international humanitarian law no State can claim not to be aware of such violations being perpetrated in Yemen.

The 274-page report enumerated possible war crimes committed by both sides in the conflict, including airstrikes and shelling, landmines, “siege-like tactics,” attacks on hospitals and other vital infrastructure, arbitrary arrests and executions, torture, and forced conscription of children into combat. The writers claimed to have forwarded the names of top military and political individuals from Saudi Arabia, the United Arab Emirates, Yemen, and the Houthi movement to the UN High Commissioner for Human Rights for further investigation and possible prosecution.

The UK and France fall under special scrutiny as signatories to the Arms Trade Treaty, which bars the sale of weapons if a country believes they will be used to commit “mass atrocities.” However, even non-parties to the ATT may face “criminal responsibility for aiding and abetting war crimes” since after five years of fighting “there can no longer be any excuses made for failure to take meaningful steps to address” the humanitarian crisis and international law violations taking place in Yemen.

The UK Court of Appeal ruled in June that the government had “made no attempt” to determine whether Saudi Arabia was using its weapons to violate international law, and while Secretary of State Liam Fox said he would suspend licenses for export to the Saudi coalition, the Department for International Trade said it would appeal the ruling. A rare bipartisan-supported bill to end weapons sales to Saudi Arabia by the US was vetoed in July by President Donald Trump, who complained it would “weaken America’s global competitiveness” and damage relationships with allies. And the French government hid the arms sales from its people entirely, then threatened the journalists who exposed the sales with arrest for publishing confidential information.

The UNHRC report also provided an update on the shocking scale of the humanitarian crisis, revealing that nearly a quarter of the Yemeni population was malnourished at the start of 2019, according to the Office of the Coordination of Humanitarian Affairs, with 230 of 333 districts at risk of famine and 24.1 million people in need of assistance merely to survive.