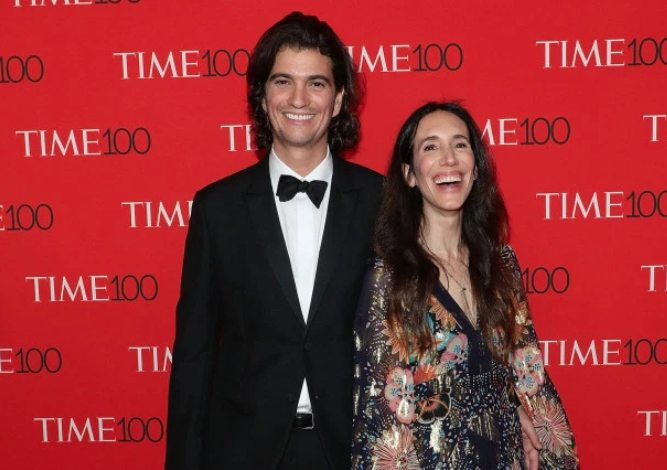 Ousted WeWork CEO Adam Neumann is a ‘phony’ who ‘thinks he is a Jesus figure’: Insiders

On Tuesday, billionaire Adam Neumann stepped down from his role as CEO of the office-rental start-up WeWork, in the wake of reports about his outlandish behavior and the company pushing back its once highly anticipated stock IPO.

And while the abrupt, reportedly forced, departure may look like a disaster for WeWork, insiders says it’s actually a relief to employees — and, perhaps, for the CEO himself.

“It’s a great way for him to phase out,” said one top staffer who recently left. “Now he doesn’t have to deliver on all the crazy things he promised. ”

Among Neumann’s reported wildest dreams was creating WeWork Mars — an office space on the red planet. And at a company event in 2018, he said, “There are 150 million orphans in the world. We want to solve this problem and give them a new family: the WeWork family.”

According to a New York magazine story from June, Neumann recently told a person close to the company, “When countries are shooting at each other, I want them to come to me.”

“He clearly is very smart and ambitious,” said a real-estate executive who has had dealings with WeWork. “But he starts talking about some of the more germane aspects of the city’s land-use process, which [is] our specialty, and he has no idea what he’s talking about. Your bulls–t meter just goes off with him. He’s the quintessential person who doesn’t know what they don’t know.”

But a former WeWork executive who left the company last month places at least part of the blame on Softbank, the Tokyo-based conglomerate that has poured money into buzzy American startups including Uber and Slack. Softbank has funded We Co, WeWork’s parent company, to the tune of more than $10 billion.

“I’m angry at Softbank. You give a guy that amount of money for him to go crazier and harder and faster — and then turn around and fire him for going too crazy, too hard, too fast. It reeks of ­hypocrisy,” said the former exec.

The Wall Street Journal recently reported how, in 2018, Neumann and some pals left a wad of marijuana stuffed in a cereal box on a borrowed private plane. The jet’s owner, furious, recalled the plane, leaving the CEO, who is worth a reported $4.1 billion to find an alternate ride back home.

But the former executive stresses that Neumann is a well-intentioned Icarus allowed to get too close to the sun with his over-the-top behaviors — when all he really needed was someone to pull him down to earth.

“You never got the sense that he was a bad dude,” said the exec of Neumann, 40. “The board could have grown a pair and called Adam out on his behavior. This conclusion was perfectly avoidable 18 months ago.”

According to others, the ­C-suite was too scared to talk sense into their wild leader.

“One time, we asked one of the top execs, ‘Since you’re more established, can you bring him back to reality?’” recalled another insider, who left the company earlier this year.

“And she said, ‘When Adam comes in and wants to do this or that, even if it’s a really bad idea, we will figure out how to do it.’ ”

According to multiple former WeWork employees, Neumann seemed to manage by his own code of conduct.

One staffer, who was in WeWork’s real-estate division for three years, established the employee support group We of Color after, he claims, experiencing racism at the company’s 2018 London Summer Camp retreat.

The We of Color source said he was called the N-word and that mud was kicked and liquor thrown at him and fellow black team members by other WeWork employees.

“[After we established We of Color] we requested a meeting with Adam,” said the We of Color source of his group. “He never took the meeting. He kept saying he was going to take the meeting and would set it up and his assistant would cancel it and cancel it. She said, ‘Honestly, Adam does not want to talk about this and you’re not going to get the support for this.’ ”

A representative for Neumann and his wife had no comment for this story, while a spokesperson for WeWork said the company cannot comment on matters during the pre- IPO “quiet period.”

A former community manager at the company, who was one of the first 20 hires, said Neumann was highly inappropriate when screening her for the job.

“He asked me in my interview: ‘Are you pregnant or planning to be pregnant anytime soon? Do you live with someone?’ Where do you live?’ ” she recalled. “I was like, ‘Oh my God, he’s crazy.’ ”

His erratic behavior led some staffers to retaliate. When, in June 2018, he abruptly announced that WeWork was banning meat at employee events and would no long­er reimburse staff for dinners of beef, poultry or pork, beleaguered workers found a way to strike back. According to one source, some started expensing pricey lobster meals. Others opted for the fanciest veggies they could find.

He added that the way the ­no-meat announcement was handled was a mess.

According to the Wall Street Journal article, employees witnessed Neumann eating meat after the announcement.

The confusion around the ban, the former engineer said, “was a turning point at the company. Most people felt like management was talking down [to them], rather than working with [them].”

Neumann didn’t always live the life of a tycoon. He was raised on an Israeli kibbutz by his mother, a doctor, and attended the Israeli Naval Academy and then Baruch College in NYC.

After a series of start-up flops, including one for a shoe with a collapsible heel and another for baby clothes with built-in kneepads, Neumann founded WeWork with friend Miguel McKelvey.

The partners started in 2008, convincing a Dumbo landlord to let them take an empty commercial space, divide it into communal offices and rent those out. They struck out on their own two years later, opening the first WeWork at Grand and Lafayette Streets and securing venture-capital funding to expand.

The early days were lean and mean. “If anyone left at 6 p.m., the CFO would say, “ ‘Oh, half-day?’ Everyone worked really hard 24/7,” said the former community manager.

Back then, Neumann lived in a small, one-bedroom East Village apartment with his wife. He tripped up, it seems, in his quest to grow — and get rich — quick.

We Holdings LLC, of which he is a managing member, finagled to trademark the word “we,” to much outcry. Neumann then turned around and, in January of this year, sold the “we” right to his real-estate company, ­reportedly pocketing $5.9 million for it. He later returned the money after a public flogging.

He has also caught flak for buying properties that he then leased back to WeWork, murkily becoming both landlord and tenant.

“The self-dealing s–t is cray-cray,” said the real-estate exec.

“From the outside, a lot of the pitch to the public and employees is all about this ‘we’ thing, but the closer you get to the core of the company, the less it exists. It’s all about ‘me’ and ‘I,’ ” said the former top staffer, adding that he spoke to Neumann directly about concerns over his self-serving ­image. “That was the biggest letdown, personally.”

Neumann cashed out more than $700 million from the company — not a good look before an IPO — and has been buying up homes with abandon.

Among his residences are a $10.5 million Greenwich Village town house and a $35 million property in Gramercy Park. There’s a place in Water Mill, in the Hamptons, as well as a 60-acre Westchester farm, complete with a waterfall, horse-riding ring and tennis court, that came with a $22 million asking price. He and his family also own a $21 million home in the San Francisco area which reportedly includes a ­guitar-shaped room.

“It became difficult to sit through the meetings because he’s like, ‘It’s about “we” and it’s not “me,” ’ [but] he’s cashing out stock . . . and he’s not living the same way he’s telling people to live,” said the insider who left WeWork earlier this year.

The engineer said Neumann would regularly have his personal trainer come to his corner glass office for boxing sessions.

And, the engineer added, both Neumann and his wife, Rebekah — who was the chief brand and impact officer and is Gwyneth Paltrow’s first cousin — could come off as tone-deaf.

He recalled Rebekah’s announcement that the company was starting its own school, WeGrow, after being disappointed by education options for her and Neumann’s five children.

“Rebekah came on stage and started talking about how public schools were, in so many words, ruining children,” the engineer said. “She said WeGrow would cost $35,000-$40,000 per student. You’re announcing this in a room where most of your employees would not be able to afford a school like that . . . it caused a big ruckus in the company.”

Rebekah also stepped down on Tuesday. WeWork is, for now, being run by two of Neumann’s former deputies, Artie Minson and Sebastian Gunningham.

The former community manager feels that Neumann has the strength to be a team leader — but not the chops to back it up.

“He is definitely an intense person who thinks he is a Jesus figure, but he’s also very good at what he does,” she said. “He ­inspires people well.”

Adds the insider: “The first time I went to one of the all-company speeches, I was like, ‘Oh my God, this guy truly believes.’ He was almost like a televangelist . . . he really believed it. But he’s a complete phony.”