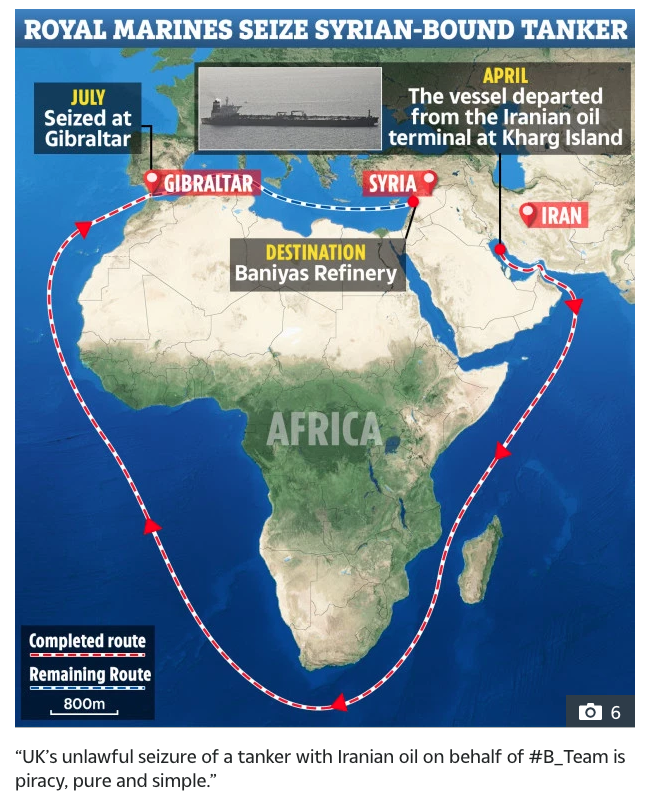 Iran’s PressTV reports the Grace 1 tanker, carrying 2 million barrels of Iranian oil, has begun departing after yesterday a Gibraltar court ruled to free it after having been held since it was boarded by UK Royal Marines on July 4.

It’s also now freely moving into the Mediterranean despite a last minute US attempt to intervene in order to bring it into American custody. While the ship was previously Panamanian-flagged, it is now flying the Iranian flag and has been renamed the Adrian Darya.

Crucially, authorities in Tehran have yet to name its destination in the Mediterranean, saying it’s free to offload oil anywhere it wants, including in Syria.

One Middle East-based war correspondent known for his access to high level Iranian sources, Elijah Magnier, has indicated the tanker “will be navigating under the flag of Iran and will be heading tomorrow towards Syria.”

He added, “The Iranian flag has a direct message to anyone willing to stop it.”

Concerning the possibility that it could still defiantly sail toward Syria, Gibraltar’s Chief Minister Fabian Picardo told CNN on Friday “We only acted in July when we had evidence that the cargo aboard the vessel was going to Syria.”

“What we found aboard the vessel has confirmed the view that we took was the correct view. We have only released the vessel… when we have been convinced that the vessel is not now going to Syria,” he said.

Iran Foreign Ministry spokesman Seyed Abbas Mousavi was quoted in semi-official Tasnim news as saying, “Iran has made no commitment that the ship would not go to Syria because from the early hours of the tanker’s detention, we announced that Syria was not its destination and we have upheld the same … and reiterated that it was nobody’s business even if it was Syria.”

Meanwhile, it’s expected that Iran will release the detained Stena Impero in a tit-for-tat gesture, as Tehran had initially expressed a desire for.

According to Elijah Magnier the IRGC will release the British-flagged tanker “before Saturday midday”.