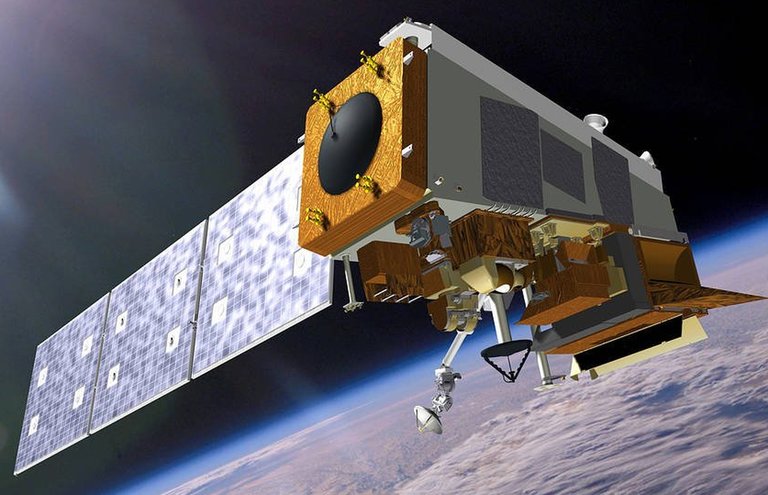 The Joint Polar Satellite System, shown here, is a collaborative program between the National Oceanic and Atmospheric Administration and NASA.

Fellow Americans: It simply does not get any better than this.  The FCC is on a collision course with both NOAA and NASA.

This website has frequently delineated  the best strategy for taking down the BEAST.  Let the beast take down the beast.  The little guy — John Q. Public doesn’t stand a chance on the many battlefields where We the People are literally fighting for our lives.

However, what can happen is for each David to sling his shot at the Goliath(s) in such a way that the Goliaths go after each other.  That’s just what’s happening with the military deployment of 5G.

Because the much more powerful radio-frequency ranges and microwave radiation necessary for the 5G roll-out are so disruptive to weather forecasting, NOAA will no longer be able to predict major storm trajectories, intensity and other vital data.  Hence, we see the FCC facing off with NOAA and NASA.  What a fight!

All we can say is that is a match made in heaven … … … or by heaven, because we have been at out wits end to shut down the extremely dangerous 5G roll-out by any means possible.  Yes, it’s that harmful to human life and destructive to the environment.

The National Academy of Sciences planned a two-day summer workshop to address a high-stakes question: Could the development of next generation 5G wireless undermine the accuracy of information gathered by weather satellites?

On July 16, less than a week before the scheduled start, the event was canceled because many of the “most knowledgeable about the topic” were reluctant to participate, according to a statement released by the National Academy of Sciences.

The science workshop was a casualty of a nasty dispute within the federal government that has pitted Federal Communications Commission (FCC) officials who say the 5G technology can be safely developed against NASA and National Oceanic and Atmospheric Administration officials who say tighter restrictions are needed to prevent a serious threat to data collection by polar-orbiting satellites.

How this gets resolved could have serious implications for the accuracy of forecasting, which will be increasingly important in a warming world expected to have more extreme weather events. It will also have repercussions for a U.S. wireless industry eager to deploy a transformative technology that offers much faster data speed.

The rhetoric heated up this spring as the FCC announced plans to auction off a band of the electromagnetic spectrum near the frequency that polar-orbiting satellites use to monitor water vapor.

In the months since, federal officials have negotiated behind the scenes to try to find common ground over what strength of 5G transmission signals would be allowed on that portion of the spectrum.

But publicly, federal officials have continued to lob shots at one another.

In July Senate testimony, Jim Bridenstine, NASA’s administrator, citing an unreleased study by his agency, said that up to 70 percent of the water-vapor information from the polar-orbiting satellites could be lost as that part of the spectrum is developed by 5G companies.  This information is crucial for building models that meteorologists use to make forecasts.

“Some of the data could be interfered with, it could be corrupted … it would affect our ability to predict weather, without question” said Bridenstine, who recommended the FCC require the 5G companies to transmit signals on that part of the spectrum at much lower levels.

FCC chairman Ajit Pai, in a June 11 letter to Washington Sen. Maria Cantwell, slammed the NASA study as filled with errors and unrealistic assumptions that created a “parade of horribles” about 5G development that have “no basis in reality.”

“In short, the Commission’s decisions with respect to spectrum have been and will continue to be based on sound science and engineering rather than exaggerated and unverified  last minute assertions,” he wrote.

Cantwell, a Democrat, is the ranking member of the Senate Commerce Committee, which has jurisdiction over the FCC, NASA and NOAA. She has been on high alert about the potential for 5G development to harm the accuracy of multiday forecasting vital to tracking major storms and floods.

In the Northwest, these predictions are critical during fire season and inform fishermen and other mariners of turbulent weather.

In a letter last week to federal agency leaders, Cantwell urged them to resolve the dispute.

“When it comes to the lives, property, the economy and our national security, it is the responsibility of the entire federal government to get this right,” Cantwell wrote.

The Seattle Times reached out to the FCC and NOAA for an update on 5G negotiations, and spokespeople for the agencies declined to comment.

The FCC spring auction was backed by the Trump administration, which wants to make the U.S. the global leader in 5G technology, which will make it easier to develop faster and more reliable wireless connections, and greatly increase the capability to gather, process and analyze information.

This is expected to have wide-ranging impacts on education, health care, automotive and other industries, and President Donald Trump wants the U.S. to have, by 2020, more 5G spectrum than any other country.

“The race to 5G is on, and America must win,” Trump said in April appearance with Pai in the White House.

To help make that happen, the FCC is “pushing more spectrum into the marketplace,” updating policies and “modernizing” outdated regulations according to a policy document published on the commission website.

NOAA and NASA officials have repeatedly said they also support 5G development but don’t want it to harm a satellite network that cost taxpayers $18 billion to develop, according to a June letter that Commerce Secretary Wilbur Ross sent to Sen. Ron Johnson, R-Wis.

These instruments are microwave sounders, developed by Northrop Grumman for NOAA’s Joint Polar Satellite System. They can pick up extremely small signals from water vapor  emitted into the Earth’s atmosphere at 23.8 gigahertz,  a unit of measurement for electromagnetic frequencies. These measurements can be “contaminated” by even slight noise into the band, according to a Northrop Grumman briefing paper.

The concerns center around the impacts of 5G use of a nearby band, 24.25 to 24.45 gigahertz, and whether those transmissions could bleed over to disrupt the weather equipment. This band was included in the spring FCC auction of a broader part of the spectrum that brought in $2 billion in revenue from 29 bidders who received 2,904 licenses, according to the letter Pai sent to Cantwell.

Pai said in the letter that the FCC had concluded that current regulations, which would allow the power of transmissions on that portion of the spectrum at  -20 decibel watts. He said this would be sufficient to prevent interference with the satellite weather gathering equipment.

But the Northrop Grumman briefing paper, citing an internal corporate analysis, concluded that a much lower transmission limit of -58 decibel watts is required to protect the weather satellite monitoring. Without such a limit, “we have indications that proliferation of 5G systems using 24 GHz (gigahertz) frequencies will make our current and future systems less accurate, or even unusable …,” the document stated.

Wireless-industry officials say that such restrictions are absurd and would drastically reduce the value of that portion of the spectrum to 5G.

“Billions are at stake and the U.S. wireless industry 5G plans are dependent upon access on the terms everyone agreed upon,” stated May 21 internet post by Brad Gillen, executive director of CTIA, which advocates on behalf of the industry.

The National Academy of Sciences workshop was supposed to offer scientists from the wireless industry, government agencies and academia an opportunity to get together for a “comprehensive and balanced view of issues associated with 5G interference levels.”

The cancellation notice referred to “ongoing negotiations” to determine acceptable interference levels as what led many people to decline to attend.

“I wasn’t surprised by this, but I  was disappointed,” said Jordan Gerth, a scientist with the University of Wisconsin’s Cooperative Institute of Meteorological Satellite Studies who was invited to the conference. “I think it would have been a good opportunity to bring the parties together.”

Efforts to find a compromise are likely to continue in the weeks ahead as the United States prepares to send a delegation to an October World Radiocommunication Conference in Egypt, where international standards for 5G’s use of the spectrum will be on the agenda.

European nations already have called for tighter restrictions than those proposed by the FCC.  The U.S. delegation is expected to offer counter proposals, according to Gerth.