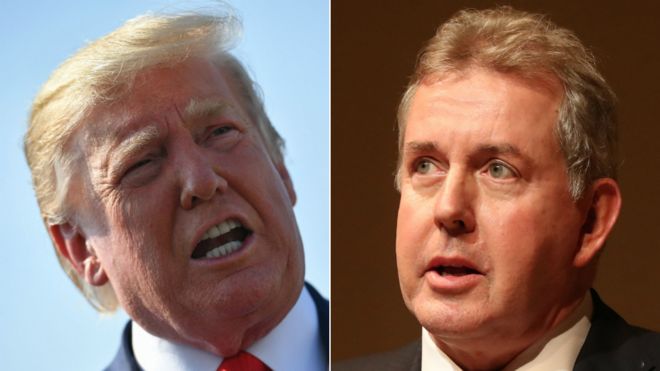 Downing Street has reaffirmed its “full support” for the UK’s ambassador to the US after Donald Trump said he will no longer work with him.

The US president was responding after leaked emails revealed Sir Kim Darroch had called his administration inept.

In a series of tweets Mr Trump also criticised Theresa May’s handling of Brexit saying she had created “a mess”.

Number 10 called the leak “unfortunate” but said Sir Kim was continuing to carry out his duties.

Mrs May told members of the Cabinet the leaked memos did not reflect the closeness of the relationship between the UK and the US.

She told ministers they were “absolutely right” to give their support to Sir Kim and stressed the importance of ambassadors being able to give “honest and unvarnished” assessments to ministers.

“The UK has a special and enduring relationship with the US based on our long history and commitment to shared values and that will continue to be the case,” the prime minister’s official spokesman added.

Former Conservative leader and ex-foreign secretary Lord Hague urged the UK government to be “patient” and “not escalate things”.

However, he also told Radio 4’s Today programme: “You would never have any honest report from any ambassador in the world if you said: ‘Well, if any of their communications are released, we’ll then have to remove them from their position.'”

“That is well understood by US diplomats… I think there will be a strong enough relationship between a new prime minister and the president to have that conversation,” he added.

An ex-British ambassador to the US and a close friend of Sir Kim’s said there was a “possible range of villains” who potentially could have made the leak.

Sir Christopher Meyer told Today: “It was clearly somebody who set out deliberately to sabotage Sir Kim’s ambassadorship, to make his position untenable and to have him replaced by somebody more congenial to the leaker.” 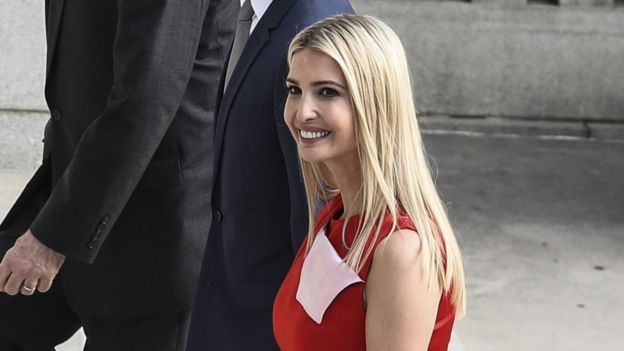 EPA/OLIVER CONTRERAS . –  Ivanka Trump, pictured arriving at a dinner Sir Kim was disinvited from on Monday, is due to meet the ambassador later

Speaking on Monday following Mr Trump’s initial comments on the leaked emails, Downing Street said the prime minister did not agree with Sir Kim’s assessment but had “full faith” in him.

Police were urged to open a criminal investigation into the leak in addition to an internal inquiry launched by the government.

Tom Tugendhat, chairman of the foreign affairs committee, told MPs he had made the request in a letter to the Met Police.

The Met said it had received Mr Tugendhat’s request but had not received an official governmental referral of allegations in relation to the Official Secrets Act.

Such a referral would be required for a criminal investigation to be considered, a Met spokesman said.

The Trump question faced by the next PM

Downing Street’s response is a classically formal “thanks, but no thanks”. A stiff brush-off in riposte to the US president’s digital tirade, which was extraordinary even by his standards.

With the current prime minister almost out of the door, and the UK ambassador in Washington leaving too, the remarks are unlikely to change much directly, and this allows Number 10 to try to shrug off the criticism.

Less officially, though, there is real frustration. One senior Tory warned that “we cannot bow down to this form of lunacy” where the leader of another country tries to use online swagger to seek revenge on one of the UK’s diplomats – not least from one of our most important allies.

Confidential emails from the UK’s ambassador, leaked to the Mail on Sunday,contained a string of criticisms of Mr Trump and his administration, describing the White House as “clumsy and inept”.

Sir Kim, who became ambassador to the US in January 2016 about a year before Mr Trump took office, questioned whether this White House “will ever look competent” but also warned that the US president should not be written off.

The emails, dating from 2017, said rumours of “infighting and chaos” in the White House were mostly true and policy on sensitive issues such as Iran was “incoherent, chaotic”.

The US president responded to Sir Kim’s comments published in the Mail on Sunday article by saying “we’re not big fans of that man and he has not served the UK well”.

But on Monday Mr Trump escalated his response with a series of tweets criticising Mrs May and her handling of Brexit.

“What a mess she and her representatives have created,” the US president said.

“I do not know the ambassador, but he is not liked or well thought of within the US. We will no longer deal with him.”

He said that it was “good news” for the UK that it would soon have a new prime minister.

The US state department declined to comment on Mr Trump’s remarks, but the ambassador was disinvited from a dinner held at the White House on Monday night for the Emir of Qatar.

By saying he won’t deal with Sir Kim Darroch any more, Donald Trump is apparently all but declaring the ambassador to be persona non grata. That is the formal legal process by which a host government expels a foreign diplomat.

The key question now is what the president means by the word “deal”. If the royal “we” used by Mr Trump means that his entire administration will no longer deal with Sir Kim or any of his staff then the British government may have to decide to fast track the retirement of their man in Washington.

Sir Kim, who is an honourable man and was stepping down anyway in a few months, may decide to resign. If, however, Mr Trump merely means he won’t deal personally with Sir Kim then the ambassador may stay on until the new prime minister can make his own appointment.

This all presents the British government with an awkward dilemma – to buckle under US pressure and bring Sir Kim home, risking accusations of abject weakness, or to stand firm and defend their ambassador for doing his job and telling the truth as he sees it, risking even further damage to the UK-US relationship.