Deutsche Bank is the Lehman Brothers of 2019, it’s collapsed and no one is talking about it 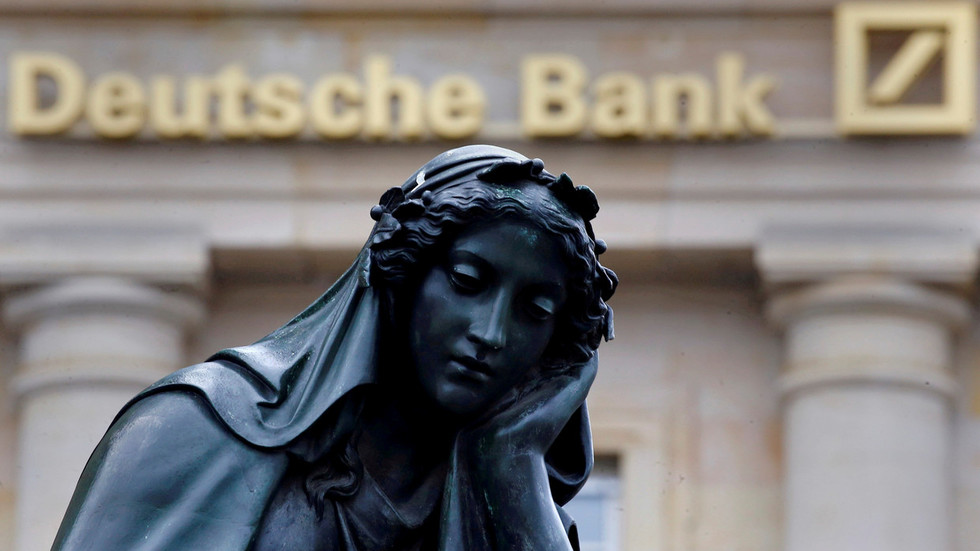 FILE PHOTO: A statue next to the logo of Germany’s Deutsche Bank in Frankfurt © Reuters / Kai Pfaffenbach

Deutsche Bank is the Lehman Brothers of 2019, it’s collapsed and no one is talking about it

When traditionally stable institutions like Deutsche Bank find themselves in trouble, it’s a signal that the world’s financial system will face big problems down the road, legendary investor Jim Rogers has told RT.

On Monday, the German multinational investment bank –and the world’s 15th largest bank by total assets– started cutting thousands of jobs as part of an $8.3 billion overhaul announced one day earlier. The bank’s workforce is set to be reduced by 18,000 to around 74,000 employees by 2022, as Deutsche Bank scraps its global equities and trading operations.

The move has already impacted the bank’s shares, which started to fall after initial 4 percent gains on Monday.

“The financial system is in trouble and this is just one sign of what is going on. This has happened in previous financial problems in the 1930s or the 1960s or the 1990s,” Rogers said in a phone interview with RT. He explained that central banks around the globe drove interest rates “to crazy levels,” and now we have to pay the price for that.

This led to what “we think is a stable and sound [bank] start making speculative loans… and then what used to be strong banks get in trouble.”

Deutsche Bank’s major overhaul does not mean it will not survive, according to Rogers. However, the bank will never be the same and “this is serious trouble” for the lender as well as the entire financial system, the investor believes.

Rogers offered a reminder that some stable banks went bust when nobody expected it, as was the case with Lehman Brothers in 2008 or with another old bank, British Northern Rock.

“And it is happening again. If you go to Scandinavia you see some of those banks that have been around for years are in trouble now. This is nothing more than a sign of the times and we’re going to have a lot of problems down the road,” the investor said.

However, according to Rogers, Deutsche Bank is unlikely to collapse due to multiple warnings and enormous government efforts to support it. Rogers went on to explain that collapses occur unexpectedly and it’s when the global markets can crash.

“If Deutsche Bank were to collapse it would be a surprise. It would cause the global market to start to decline,” he said, adding that it would create a “snowball” that would see other major banks follow the same path.